Senior care ministries must be rebuilt after pandemic of loneliness

Grandpa pleads for peace: We must fight ‘5 Hiroshimas a second’

Amid polarization, the church must work to build bridges 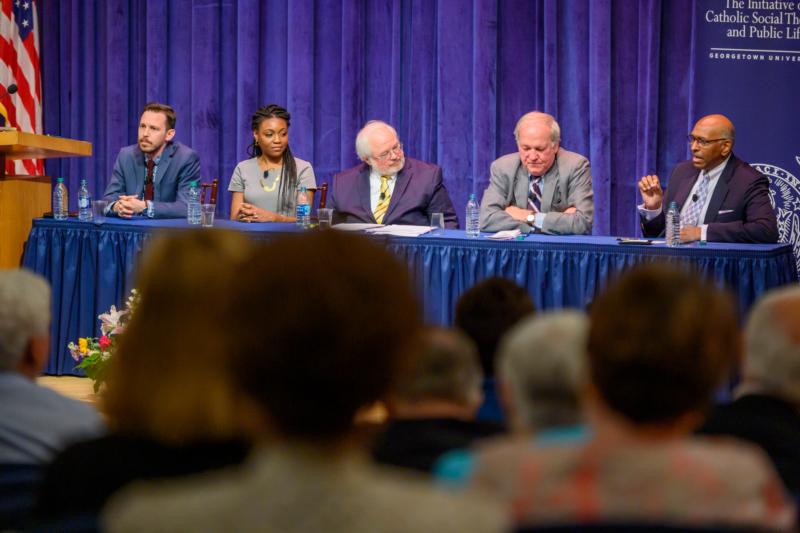 Michael Steele, a political analyst for MSNBC and former chairperson of the Republican National Committee, gestures during a May 22, 2019, panel discussion at Georgetown University in Washington on how presidential candidates have talked about their beliefs and how faith plays a role in how people vote. Also pictured are: Jack Jenkins, religion and politics reporter for Religion News Service; Christine Emba, columnist for The Washington Post; John Carr, director of Georgetown University’s Initiative on Catholic Social Thought and Public Life; and Mike McCurry, former press secretary to President Bill Clinton. (CNS photo/Rafael Suanes, courtesy Georgetown University)

Angry polarization pervades too many conversations these days, from social media to cable news to family dinner tables. Catholics aren’t exempt from this, of course — in fact, sometimes we seem to revel in it.

Just like everyone else, we too often act like members of political factions fighting for preferred ideological agendas rather than members of a family of faith.

Yet we know that we’re called to live our Catholic faith and share the principles at its heart — the protection of human life, care for the poor and vulnerable, respect for the dignity of all — with those around us; to love one another as Jesus loves us.

And in these challenging times for our church and country, it’s more important than ever to bring Catholic teachings to public life with humility and love, and to work for the common good together as a communion of faith.

Recognizing the costs of unnecessary and harmful polarization, in June 2018 our Initiative on Catholic Social Thought and Public Life at Georgetown University in Washington convened some 100 emerging and established leaders from different political, ecclesial, racial and ethnic perspectives to explore how Catholic social thought can help bridge divides so that we can more effectively work together to advance the common good amid the divisiveness we see all around us.

Our goals were not to resolve differences on specific issues, but to start genuine, productive dialogues; to build relationships across existing divides; and to lift up the principles of Catholic social thought as avenues to help shape a more faithful and unified Catholic contribution to public life.

We were responding to Pope Francis’ challenge to look outward, not inward; to share the joy of the Gospel; and to act on the “call to holiness in a practical way for our own time, with all its risks, challenges and opportunities.”

In the process, we learned some important lessons about how to reduce polarization and build up a more effective public witness, among them:

— Work for authentic dialogue rooted in truth and love, not a false peace. We didn’t seek to arrive at a least-common denominator Catholicism or to weaken anyone’s dedication to his or her principles or particular efforts.

Instead, we worked to find ways to hold fast to principle without creating unnecessary division. We worked for unity by focusing on the beliefs we share and the people we’re called to serve, rather than on ourselves and our tired internal disagreements.

— Build friendships in person and across divides. Sharing meals together goes a long way toward humanizing people who otherwise might know each other only through comments made on social media on one of those days when there’s too much work and not enough coffee. What unites us is more than what divides us, and that’s something best learned face to face, not by reading words on a computer screen.

Face-to-face engagement can also better bridge racial, ethnic, generational and other divides, creating opportunities for younger Catholics and those with diverse backgrounds. That’s essential to developing the next generation of lay leaders in the church and moving on from divisions of years past.

— Serve “the least of these.” Sister Norma Pimentel of Catholic Charities of the Rio Grande Valley in Texas said that “¡Ayudame!” — “Help me!” — is what she and her coworkers hear first from the migrants they serve at the border.

She reminded us that “there’s no polarization” when it comes to answering that call, because “you go out of your way to do what you can to help and to be present because it’s Jesus Christ himself calling us forward.”

Efforts to build on these lessons have been truly tested in the past year. We held our gathering June 2018.

Shortly afterward, the latest wave of the clergy abuse crisis broke in full force here in the U.S., with the revelations about former Cardinal Theodore E. McCarrick, the Pennsylvania grand jury report, the launching of multiple investigations into the U.S. church and numerous other reports of failures on the part of church leaders.

Catholics are justifiably angry, anguished and looking for responsive action.

It would seem that these awful events would bring Catholics together in search of practical steps forward toward justice for victim-survivors and accountability for those who committed these crimes or covered them up. While that’s been the case to a certain extent, much energy has also been devoted toward furthering other agendas.

To renew efforts toward unity and communion, we should remember that a true conversion of heart must be at the root of our response for real changes to be effective.

As Pope Francis wrote to the U.S. bishops this past January, a unified path forward must grow from a “clear and decisive focus” on our Gospel mission, grounded in the understanding that “we are not solitary pilgrims; ‘if one member suffers, all suffer together.'” From such roots, concrete reforms can take hold.

We are members of a wounded church in a divided nation. But we know Who can heal those wounds. We know that we can help overcome harmful divisions by witnessing to the church’s teachings in what we say and what we do.

Most of all, we know that “we are not solitary pilgrims”; we’re in this together.

(Kim Daniels is associate director of the Initiative on Catholic Social Thought and Public Life at Georgetown University.)

PREVIOUS: Getting beyond Darwin

NEXT: Who is ignoring women’s health?