How to give God a head start toward unity 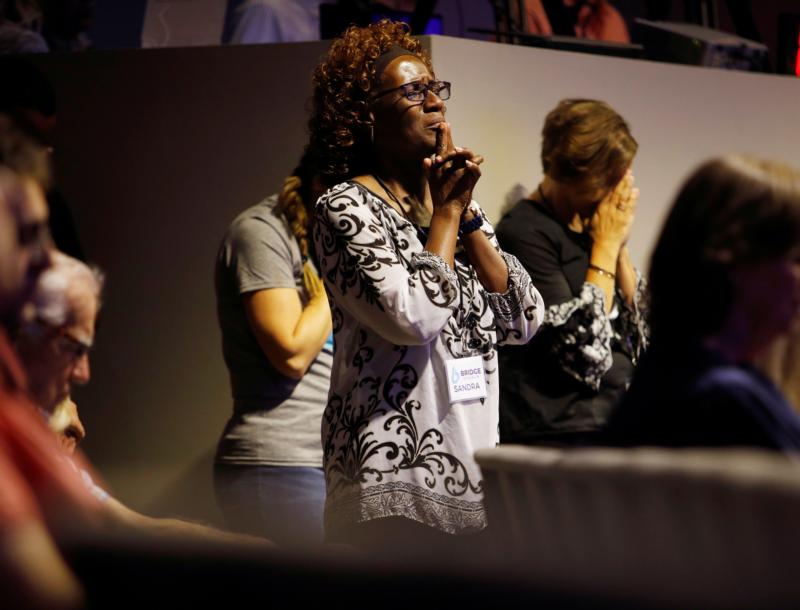 People attend a June 1, 2019, prayer vigil for the victims of a shooting at the municipal government complex in Virginia Beach, Va. Remember to pray to the Holy Spirit, who will “teach you at that moment what you should say” (Lk 12:12). (CNS photo/Jonathan Drake, Reuters)

Having worked in public relations for several Catholic organizations, I’m accustomed to paying close attention to how journalists cover the church. One trend that’s hard to miss is that in the mainstream media, the U.S. church is increasingly characterized as “deeply divided” and “polarized.”

I have little doubt that this perception is a direct result of the intraecclesial disputes being played out in public arenas, mostly on social media platforms.

Everyone from bishops to influential lay leaders to people in the pews now have a microphone (or megaphone, depending on their number of followers) to use. More often than not, they are rewarded with increased visibility when they post something divisive or reactionary.

Catholics should not be Pollyannaish. From its beginning the church’s members, including leaders, have had differences of opinion. The Council of Jerusalem, chronicled in the Acts of the Apostles, was one such dispute. But the author of Acts also describes the community of believers as being “of one heart and one mind” (4:32).

Is unity possible today when consensus seems so unrealistic? In the spirit of hope, I’d like to suggest a few guiding principles to help move toward that goal.

— Have a person-centered approach.

Don’t make assumptions about people based on where they worship, what religious order they belong to, how many children they have, what form of the Mass they prefer or what their political affiliation might be. These are all accidental considerations. The most important thing to keep in mind is their dignity as children of God.

Do get to know people as complex individuals, with varied life experiences, interests and traditions. Take the time to hear someone’s story before engaging in conversation. Imitate how Jesus interacted with those who approached and/or questioned him.

— Listen and read with an open mind and heart.

Don’t pick up an article with the intention of underlining everything you disagree with or extracting quotes out of context to prove your own position. Don’t presume that because you take issue with one thing someone may have written or said in the past that you should automatically reject their next idea or proposal.

Do read and listen in a spirit of charity to better understand an argument, point of view or concern. Look for some value that you might share with the author or speaker, even if you ultimately come to different conclusions about how to achieve a goal. Let the text or talk speak for itself first before reacting.

— When it comes to communication, don’t assume that “one size fits all.”

Don’t presume that every person will be persuaded or moved by the same argument or message. St. Thomas Aquinas wisely observed that a message “is received according to mode of the receiver.” That means when you’re communicating, you have to pay attention not only to what you want to say, but what another person needs to hear. You also have to consider the best method to relay that message.

Do keep in mind the particularities of your audience or interlocutors: What’s their state of life or vocation? Educational background? Relationship to the church? Tailor your messaging, tone and topics in such a way that they can engage and respond in a fruitful way.

— Pray and look to Peter for unity.

Don’t pick and choose statements or quotations from Pope Francis (or other popes) that best suit your point of view. Prayerfully read and receive the pope’s messages in their entirety. Allow yourself to be challenged by the Gospel and by his teaching on it.

Do pause before posting or responding to a provocation and remember to pray to the Holy Spirit, who will “teach you at that moment what you should say” (Lk 12:12). Turn to the pope who is the church’s visible sign of unity, just as the earliest Christians looked to Peter to reconcile their differences.

Unity does not mean uniformity. But it does mean being “of one heart and mind.” While it’s ultimately God’s responsibility to unify us in our differences, in such polarized times, applying a few of these key principles might give him a head start.

PREVIOUS: Religious Millennials get creative in a world of grief

NEXT: Getting beyond Darwin