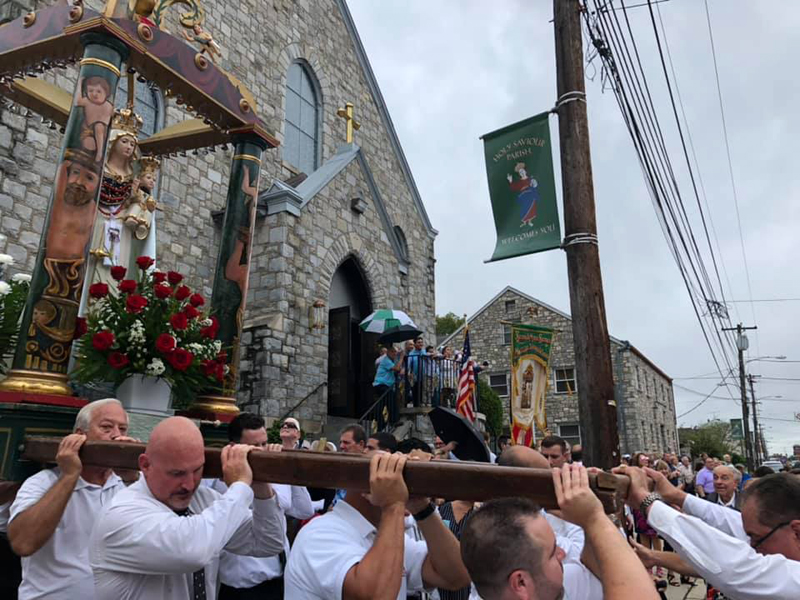 Men carry a statue of La Madonna del Soccorso di Sciacca, Our Lady of Perpetual Help, during the annual celebration to be held this year on Sunday, Aug. 18 at Holy Saviour Church, Norristown. (Photo via Facebook)

The 115th annual feast in honor of La Madonna del Soccorso di Sciacca, Our Lady of Perpetual Help, sponsored by the M.S.S. Society in Norristown, will be held on Sunday, Aug. 18.

The highlight of the feast is the solemn Mass at 11:30 a.m. in Holy Saviour Church, 409 East Main Street in Norristown, followed by a street procession with a statue of Our Lady through the East End of Norristown, accompanied by the music of the Verdi Band.

The celebration was brought to the Borough of Norristown at the turn of the last century by immigrants from Sciacca, a small fishing village in Sicily. The Madonna del Soccorso, which means Lady of Perpetual Help, became the patroness of Sciacca after the citizens came to believe that through Mary’s intercession 500 years ago, a plague came to an end.

The Norristown Lodge originated 115 years ago to help poor Italian immigrants who entered Norristown at the turn of the century. The society’s founders named the organization after the Madonna, and promised to continue the centuries-old tradition in their new community.

The M.S.S. Feast is the oldest Italian feast in Montgomery County.

NEXT: Second Sundays with the Culture Project