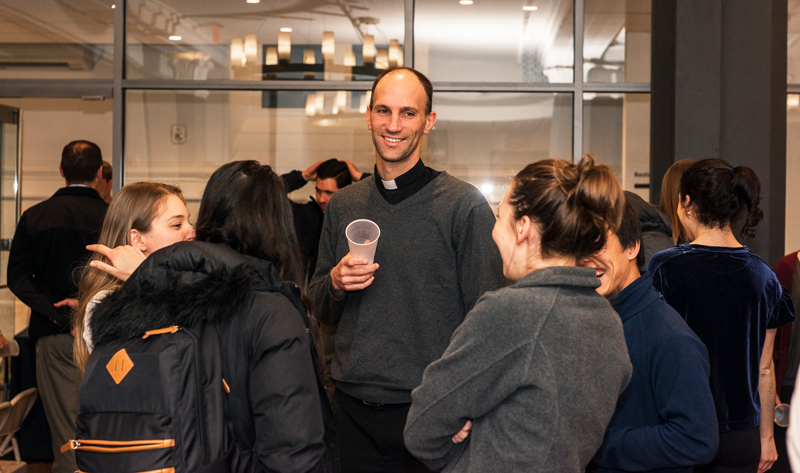 Deacon Remi Morales, center, chats with students of the University of Pennsylvania and Drexel University at the Newman Center at St. Agatha-St. James Parish in Philadelphia.

The Newman Center at St. Agatha-St. James Parish, which serves students at the University of Pennsylvania and Drexel University, will celebrate its 125th anniversary Oct. 4-Oct. 6. The celebration will include a conference, gala and inauguration of the newly renovated facilities.

The first such Newman Center in America, it is named in honor of Blessed John Henry Newman, who coincidentally will be formally declared a saint by Pope Francis at St. Peter’s Basilica in Rome on Oct. 13.

The Penn Newman Center was founded in 1893 by Timothy Harrington, a graduate medical student at Penn along with fellow students John Gilbride and James and Joseph Walsh, with Father Patrick J. Garvey, pastor of St. James Parish as their chaplain.

It was the first of an estimated 2,000 such clubs at secular colleges and universities in America and named in honor of Cardinal John Henry Newman (1801-1890), a distinguished scholar and theologian. Earlier in his life as an Anglican priest he led the Oxford Movement at Oxford University in England, which sought to restore traditional practices to Anglicanism that had been lost during the Reformation. Ultimately this led to Newman himself converting to Catholicism in 1845. He was quickly ordained to the Catholic priesthood and although never a bishop he was created a cardinal in 1879.

At this time Penn Newman is combined with Drexel Newman on the campus of St. Agatha St.-St. James with Father Carlos Keen as their spiritual director.

The three-day 125th anniversary celebration will kick off Friday evening, Oct. 4 with a keynote presentation on “Why Newman Still Matters” by Dr. Jonathan Reyes, the assistant general secretary at the United States Conference of Catholic Bishops. Saturday evening, Oct. 5 will include a 7 p.m. dinner gala at nearby The Inn of Penn with Catholic University of America President John Garvey as the featured speaker. On Sunday, Oct. 6 there will be a ribbon cutting of the Newman Center at St. Agatha-St. James. 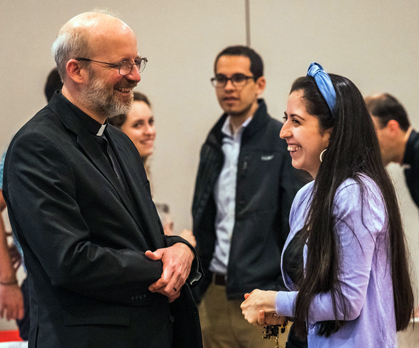 The anniversary planning for the Newman Center at St. Agatha-St. James began long before the July 1 announcement of an October canonization for Cardinal Newman.

At this point it has not been finalized how the Newman Associations in the Philadelphia Archdiocese will celebrate that event, according to Father Keen and Father Matt Guckin, the archdiocesan director for the Newman Apostolate.

But there is another Philadelphia connection with the future St. John Henry Newman. In 1849, shortly after his conversion to Catholicism, he established an Oratory in Birmingham, England based on the Oratory established by St. Philip Neri in Italy. Since this was the first English speaking Oratory there is a kinship between it and the more recent American oratories.

That includes the Oratory at St. Francis Xavier Church in Center City, which also has a strong young adult ministry.

“I will be going to the canonization,” said St. Francis Xavier’s pastor, Father Paul Convery, an Oratorian who also plans to attend the Penn Catholic Newman community celebration. 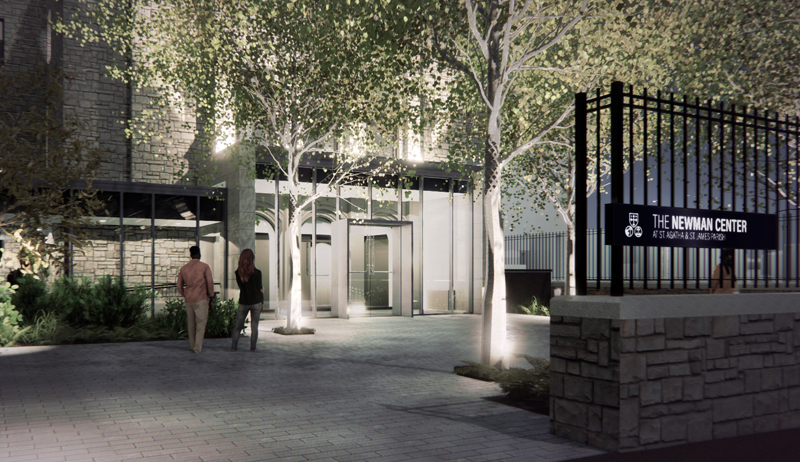 An artist’s rendering shows what the front of the newly renovated Newman Center at St. Agatha-St. James will look like when it is completed and inaugurated in October, coinciding with the center’s 125th anniversary.

NEXT: Parishioners, community members learn how to accompany migrants