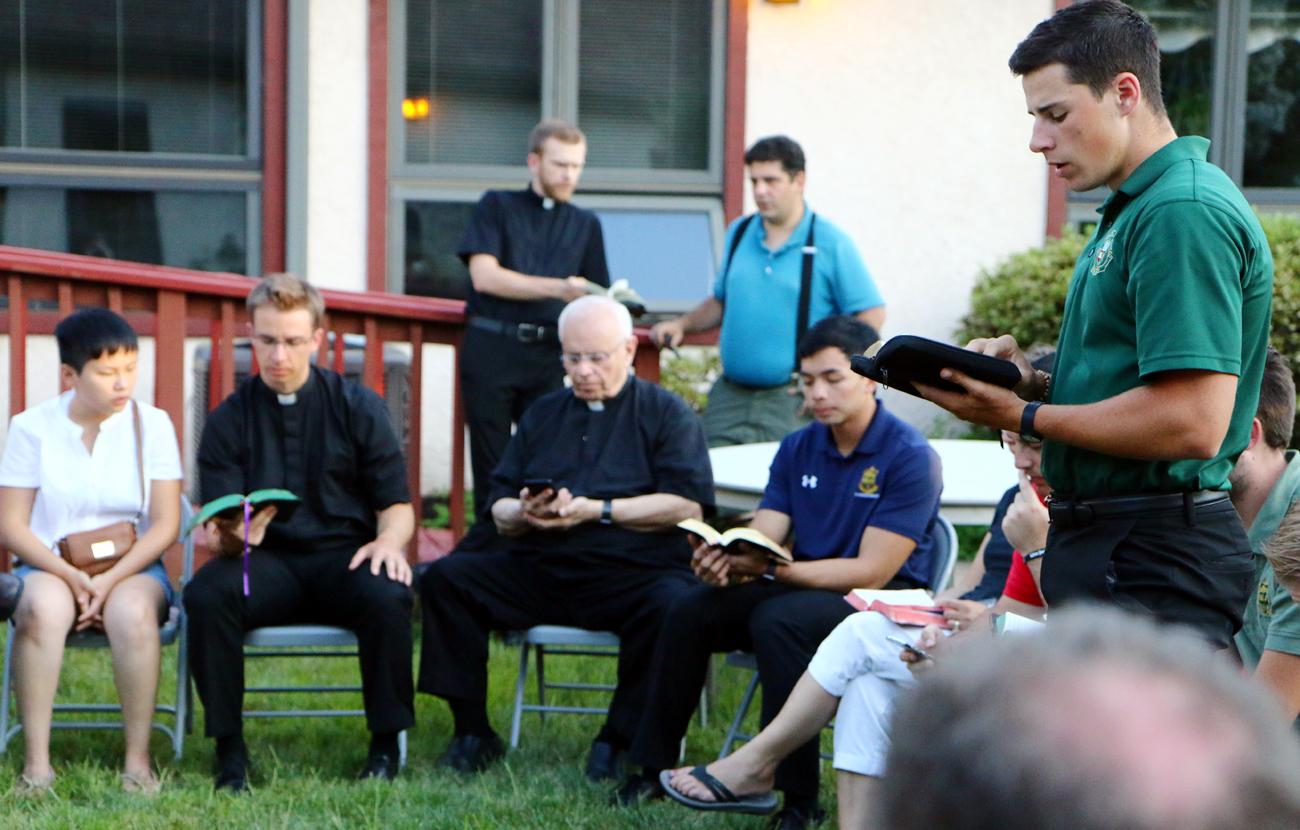 Eight seminarians from St. Charles Borromeo Seminary, who started their 150-mile “Biking for Vocations” tour of the Archdiocese of Philadelphia last week, arrived at St. Agnes Parish in Sellersville on Saturday, Aug. 10.

They celebrated a Holy Hour on Saturday evening in the church, followed by Sunday Masses on Aug. 11, sharing their vocation stories with parishioners and encouraging them to see their own vocation for God’s plan in their lives.

“We came to St. Agnes because there’s a momentum, a strong culture of vocations,” said Father Stephen P. DeLacy, vocations director for the Archdiocese of Philadelphia.

During the 10 a.m. Mass on Sunday, attended by about 500 people, two seminarians from St. Agnes’ parish, Robert Bollinger and Daniel Monastra, served on the altar along with three of the seminarians participating in the bike tour — Mark Gomba, Anh Do Mai and John Peter Zappe.

(Read a story on the beginning of Biking for Vocations last week, and see a photo gallery here.)

The Mass was celebrated by Father Christopher Cooke, director of the Spirituality Year program for St. Charles seminarians, and the only non-seminarian riding in the bike tour. In his homily, Father Cooke talked about the bike ride being symbolic of the pilgrim journey from this world to heaven.

“We serve him out of love that becomes perfect in the kingdom of heaven,” said Father Cooke, who explained how one should be vulnerable to Christ and to respond to one’s own vocation. “He has a call for each of us in love,” he said.

(Watch a video below of the seminarian cyclists cruising into St. Agnes Parish, Sellersville Aug. 10 during Biking for Vocations — by Gia Myers)

Seminarian Christopher Massaro spoke to parishioners about his call to priesthood, which started almost six years ago. He experienced what he called an “invasion of grace” when he was 22 years old and a recent graduate from West Chester University with a degree in physics. He had just moved to Nashville, Tennessee to pursue a graduate degree in medical physics at Vanderbilt University.

A young woman Massaro was dating at the time asked him if he would be interested in praying with her through a 54-day rosary novena. “It’s more like six novenas prayed back-to-back,” said Massaro. “You pray a rosary a day for the first 27 days, asking for a particular grace, and the second 27 days, you pray thanksgiving for the graces received.”

The rosary enabled him to listen to God in his heart. “I had begun to get a sense that pride was a very big obstacle to my relationship with God, and in my relationships with others,” said Massaro. Therefore, he decided to pray for humility, and God did not disappoint.

On the 27th day of the novena, Massaro was in prayer during a Mass on campus when he experienced the moment of receiving God’s grace. “I had a profound sense of the nearness and the love of God and his presence to me personally. It almost knocked me back into my seat, and I almost started crying. I had to hold onto the pew in front of me to stay standing. It absolutely changed my life, and it changed me, in a very profound way.”

From that moment on, Massaro started praying in front of the Blessed Sacrament regularly, about an hour almost every day. Then he started to go to confession more regularly, and performing acts of charity, helping homeless ministries in Nashville. He started to read the Scriptures and the catechism.

He says his goal was to deepen whatever began that day, and the Lord gave him the grace of seeing more clearly his relationship with him, “which is what humility is really all about,” said Massaro.

For too long, Massaro said, he focused on earthly things of his own will, not God’s will. “I just didn’t realize that my entire life was spent not actually believing that he existed and that he was present to me and that he loved me and was calling me to something in my life,” he said. “But in that moment, he gave me this faith to actually know that was true, and it absolutely changed me.” 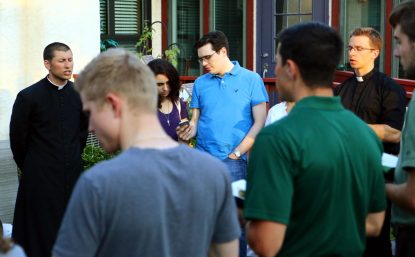 He believes the Lord answered his prayers in ways he hadn’t realized he needed, and at that point, Massaro began to consider the priesthood.

St. Agnes parishioner Michael Martin attended the Mass with his three young sons, Michael (9), Finnian (6) and Jackson (4). For him, the visit by the seminarians was wonderful and, smiling at his sons, he said, “We’ll start saying a novena for one of them.”

Jane Pinto found the seminarians’ visit to be refreshing, saying it was “inspiring that these young men are so open to accept this invitation from the Lord.”

Pat Strogis and Kathy Mancaruso, who attended both the Saturday evening Holy Hour and Sunday Mass with the seminarians, described the seminarians’ vocation stories as remarkable.

“They heard their calling, and they followed it,” said Strogis. “I can’t imagine they rode all over the area! But they’re young, and it seems like they enjoyed the camaraderie.”

Only minutes after Mass ended, the priest and seminarians changed from their vestments into yellow and black biking attire and were back on their bikes in comfortable nearly 80-degree weather, unusual for an August day.

The bikes sailed past parishioners lining the St. Agnes driveway, cheering and ringing cow bells to show support, as the riders embarked on their next 16-mile journey to Our Lady of Guadalupe Parish in Doylestown for lunch and conversation with parishioners, and then onto St. Andrew Parish in Newtown.

The bike tour ends on Monday, Aug. 12 with a midday visit to St. Catherine of Siena Parish in Horsham and a return to St. Charles Seminary in Wynnewood later in the evening. 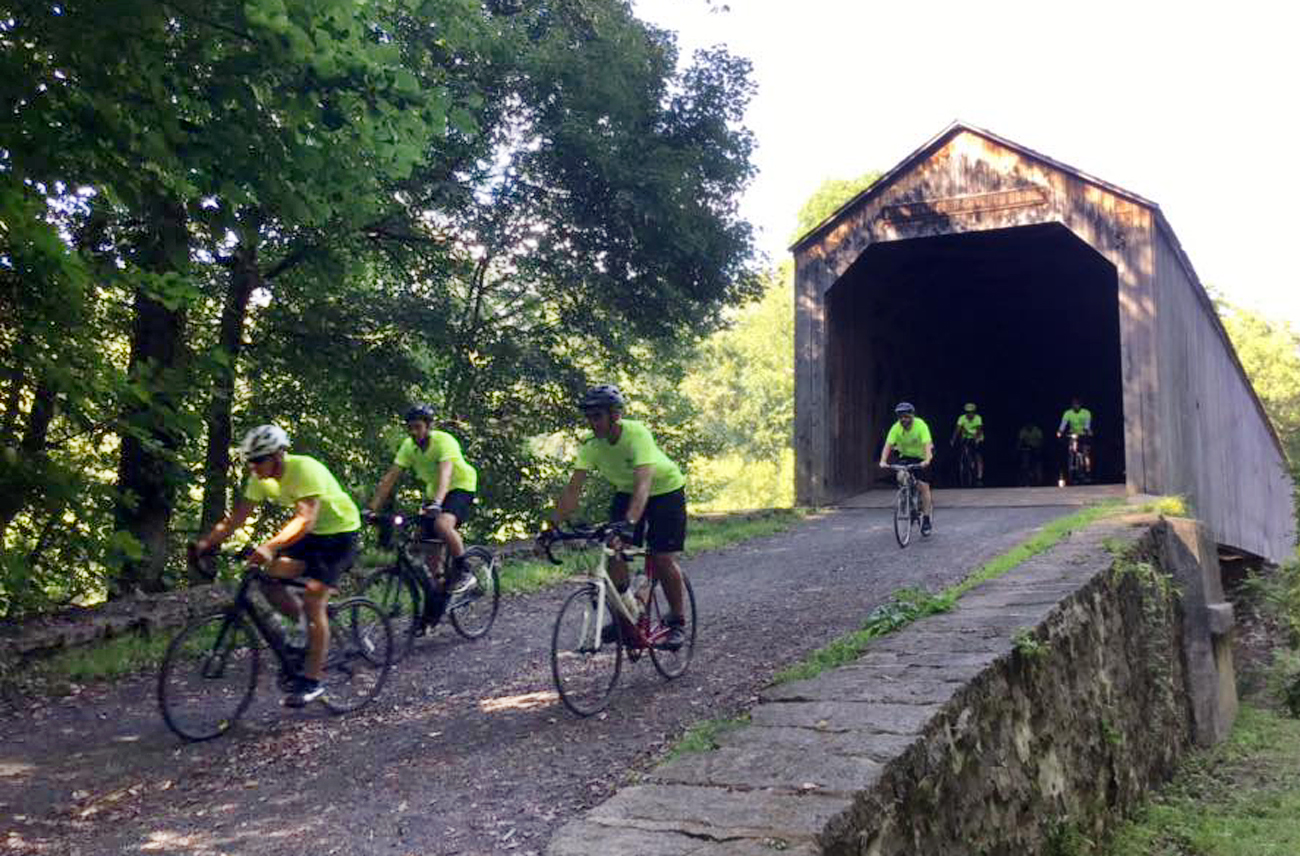 The Biking for Vocations tour by seminarians across 150 miles and nine parishes in the Philadelphia Archdiocese cruises through the scenic Bucks County landscape last weekend en route to visits at St. Agnes Parish, Sellersville and St. Andrew Parish, Newtown. (Photo by Eric Tamney)

PREVIOUS: Thanks to free tools, blind faithful lead others to Word of God