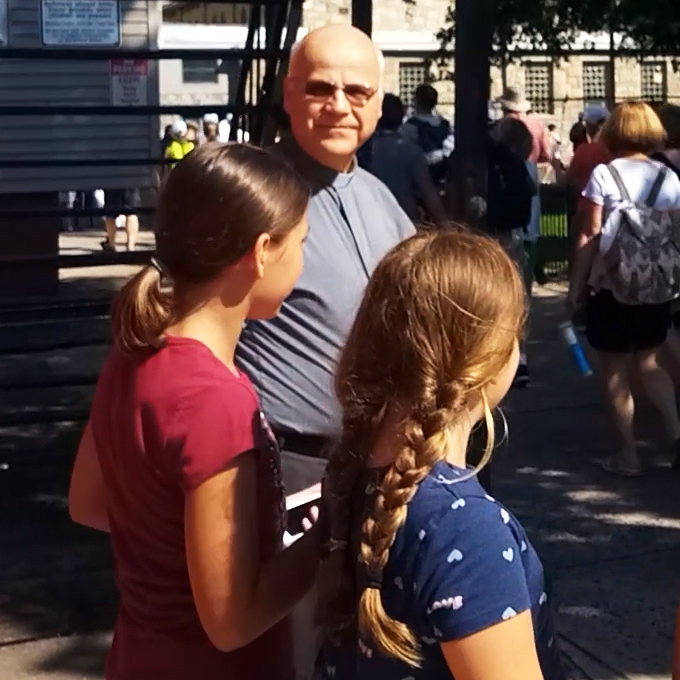 Father Marek Chmielewski, a Marian scholar from the John PauI II Catholic University of Lublin in Poland, greets pilgrims during an Aug. 9-11 journey from Philadelphia to the National Shrine of Our Lady of Czestochowa in Doylestown. (Gina Christian)

During an Aug. 9-11 walking pilgrimage from Philadelphia to the National Shrine of Our Lady of Czestochowa in Doylestown, CatholicPhilly.com spoke with Father Marek Chmielewski, a Marian scholar based at the John Paul II Catholic University of Lublin.

Father Chmielewski, a priest of the Diocese of Radom in Poland, celebrated Mass at various points during the 35-mile pilgrimage route. A prolific author and speaker, Father Chmielewski is a member of the Vatican’s international Mariology body, the Pontificia Academia Mariana Internationalis (PAMI). He shared his thoughts on why such journeys, and devotion to Mary, are vital to the spiritual life.

Q. When did the practice of making pilgrimages begin?

Pilgrimages are a very ancient practice, and they are actually undertaken in all religions, not just Christianity and Catholicism. In every religion, we find pilgrims who journey to another place — a shrine, a holy site, the location of some holy object. You find pilgrimages throughout the Bible, starting with the Old Testament. In essence, the pilgrimage is a symbol of our life.

Q. How are pilgrimages viewed in your native Poland?

For us, the pilgrimage is a very deep, very rich spiritual experience. We have a long tradition of pilgrimages, and the oldest one in Poland is from Kalisz – one of the most ancient cities in our nation – to Czestochowa. It is a distance of about 500 km.

The shrine of Czestochowa (located at the Monastery of Jasna Góra, some 150 km north of Krakow) is for us a very important place, and not only for pilgrimages in groups, but for individual pilgrimages as well. Every Pole who can tries to make it to Czestochowa at least once in their life. It is something of a duty for us.

During the liturgical year, many people go to different shrines in Poland by bus and car, not only by walking. Sometimes it’s said that Poland is a “pilgrimage nation,” a walking nation. The Pole is, as you’d say in Latin, homo viator — a “walking human,” making his way along the road of life.

And the participants in these pilgrimages are mostly young people, but all ages – childhood, adulthood, senior citizens – are represented. Normally, pilgrims organize themselves in groups ranging from 100 to 500 people, and then an overall pilgrimage consists of anywhere from two to 10 groups. So, for example, in my own diocese (Radom, some 100 km south of Warsaw), our August pilgrimage counts about 5,000 persons.

Our whole nation lives with a sense of pilgrimage. We even have smart phone applications so that you can check in with those who are on pilgrimage. Many young people will send short messages to pilgrims, asking for prayers for special intentions, and sharing photos of pilgrims in transit. So it is a real pilgrimage by legs, so to speak, and a spiritual pilgrimage by spiritual connection, through this contact by phone and by internet, which allows the app users to trace this road of pilgrimage for themselves.

And nowadays, many people from other countries — especially from Italy, Slovakia, the Czech Republic, Russia, Ukraine, Belarus, Lithuania, as well as the United States — come to participate in our pilgrimages to Czestochowa. Again, it’s a very strong and very deep spiritual experience.

Q. Many of the Polish pilgrimages focus on Mary. How is she viewed by Catholics in Poland?

In Poland, Marian piety is very important. I am the president of the Polish Mariological Assotiation (founded 20 years ago) that closely cooperates with the Pontificia Academia Mariana Internationalis (PAMI, an international body of Marian scholars) in Rome. Our goal is to promote the cult of Mary, and for us, devotion to Mary is a very important aspect of spiritual life, especially in imitating the whole comportment of Mary — her humble manner, her faith.

The cult of Mary in Poland is based on not only looking at and honoring or admiring her qualities, but on actively following her example, her attitude of faith, hope and charity.

Q. How can pilgrimages help participants to do just that?

During the walk, people pray and hear sermons, conferences and lectures. Organizers bring mobile amplifiers and sound systems, so everyone can hear the priests, monks and even seminarians lead prayer, offer talks and engage in conversation. Sometimes people ask questions about religion, about faith, and priests have the chance to answer them. Pilgrims joke and sing. It’s normal life, except that you’re not sitting down, but walking along.

It is an experience of closeness and togetherness, and because you have people of all ages, you become sisters and brothers. After a while, there’s no “Mr.” and “Mrs.,” but “you are my brother, you are my sister.” This bond, this closeness, remains after a pilgrimage. Groups hold meetings through the whole year to prepare for the next pilgrimage.

The Marian pilgrimage is a process of spiritual formation, and a very important one as well. It is part of our faith to be pilgrims throughout our lives. And we have a destination: the central goal of our life is heaven. When we live spiritually, we are preparing for that life eternal, a life that doesn’t end, because our soul is immortal.