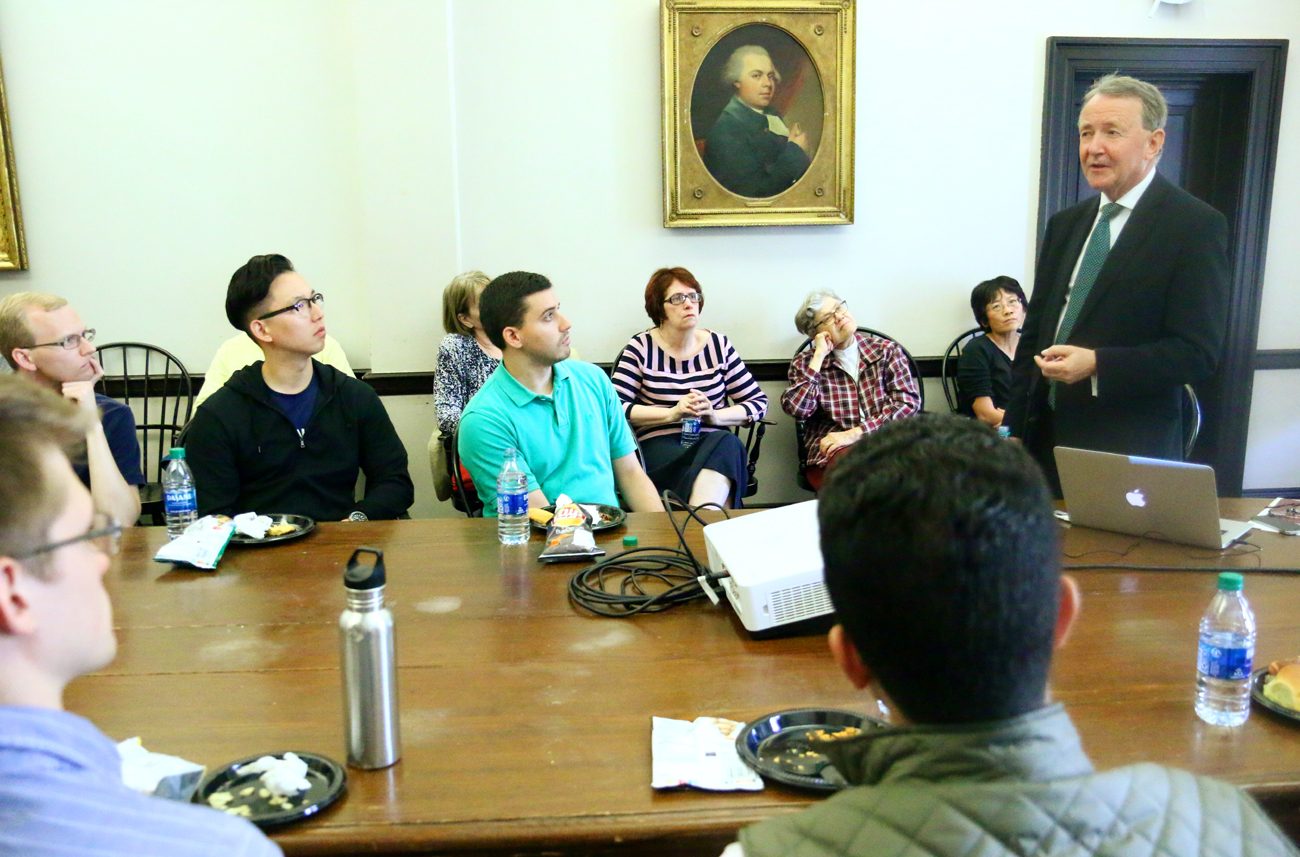 Lord David Alton (right), a member of the House of Lords of the British Parliament, speaks to guests Sept. 19 at the Collegium Institute in Philadelphia on topics including Catholic heritage and identity, human trafficking and Christian persecution around the world. (Photo by Sarah Webb)

It’s not often that Philadelphia Catholics get to host British aristocracy. But the region did just that for Lord David Alton of Liverpool, a member of the United Kingdom’s House of Lords and a life peer.

A devout Catholic, Lord Alton gave a series of talks in the Philadelphia region this past week centered on “Being Catholic in Today’s World.” He discussed Catholic identity and heritage, religious freedom and worldwide Christian persecution with a variety of audiences especially Sept. 19 at Malvern Retreat House, an event sponsored by Ascension Press.

He also took time to meet with students at Martin Saints Classical High School in Oreland, the Catholic business leaders of the Philadelphia chapter of Legatus at Overbrook Country Club and the Collegium Institute on the University of Pennsylvania campus.

Lord Alton began his service in Parliament as a member of the House of Commons in 1979. A renowned expert on the English Catholic martyrs, he is an advocate for people persecuted for their faith in a time of fundamentalist religious ideology and aggressive secularism.

CatholicPhilly.com caught up with him for a discussion just before his main presentation at Malvern Retreat House.

A. Well, we learn from one another, of course, but there really is so much to do together in that regard. A few years ago (2016) the Christian Heritage Centre at Stonyhurst and I brought the crucifix of St. Thomas More to the John Paul II Center in Washington, D.C., for an exhibit that opened just after Justice Antonin Scalia’s death. There you have two men that demonstrated what it means to be Catholic in service. More, of course, with his great example of conscience and courage, but Scalia, too, with his demonstration of how a Catholic behaves in the public sphere.

But I think also that it’s more than just present day. We in the UK have a responsibility to look to figures like John and Charles Carroll — Charles, as you know, signed the Declaration of Independence. His cousin, John Carroll, founded Georgetown and was a bishop. Embattled as English Catholics are, we’ve a lot to learn from our American Catholic cousins who ended up founding Maryland — and who often get overlooked in the founding story as a driving force in the story of the United States.

Q. What represents the greatest challenge, then, for Catholic politicians today? 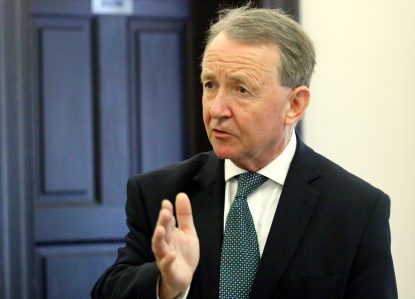 Lord David Alton makes a point during his talk Sept. 19 at the Collegium Institute in Philadelphia. (Sarah Webb)

A. Catholics in today’s society need to be in the business of winning arguments and using their beliefs to bolster their arguments. It’s absurd beyond belief to bow to the atheist-antitheist premise that religious people are somehow inherently more violent or skew people toward evil. Over 84 percent of people hold some kind of religious belief, and while religious impulses can be used to justify all kinds of perfidy, it’s ridiculous to say that religion causes these things.

If we look back on the 20th century — a century filled with men like Stalin and Hitler — some of the most appalling atrocities were committed by men without belief in the pursuit of absolute power and totalitarian domination.

Q. You’re arguing then, that Catholics and religious people need to use their identities out in the public square, rather than confine them at home?

A. Yes, and more. Our great former chief rabbi of the UK is fond of saying “Don’t ask where God was at Auschwitz; ask ‘Where was Man?’” It’s simpleminded to assume that removing or invalidating our religious impulses in politics will solve these things; in reality we’re replacing our hope in false gods: materialism and totalitarianism.

Q. Can you tell us more about your work with Arise?

A. In brief, Arise was founded by Luke de Pulford and works to free the staggering 40.3 million people who live in slavery today; its networks target the most vulnerable populations in developing countries, many of whom end up trafficked and exploited as a result of their poverty. And the majority of these people in the U.S. — people from Mexico, the Philippines, Thailand, Haiti, and India — are women, something like 8 million. Many of them are also children, about 4 million.

It is an outrage in the 21st century that slavery is still an ongoing issue, and Arise works with networks around the world to bring it to an end and help the most at-risk populations. It’s not a Catholic organization, but it works with many different faiths and communities to end modern-day slavery. And it just so happens that many of those populations are Christian.

Q. You’ve been an extraordinary vocal advocate for religious liberty and the defense of persecuted Christians throughout the world. Can you comment further on those issues?

A. Well, I think that in “the West” we are guilty of caring about every group except our own. Around the world there are 250 million Christians who suffer some form of persecution; every day, 11 Christians lose their lives. The challenge for us here is, how do we use our station, our privilege, to help those who don’t even have the liberty to freely worship or practice their faith in places like Nigeria, where Boko Haram tortures and kills Catholics and Anglicans; or Iraq, where the population of native Christians has dwindled to almost nothing. Our indifference to these peoples is a great shame for those of us who take our freedom for granted.

Q. With all this going on, what can an ordinary Philadelphia “pew Catholic” do to combat these things?

A. I’d be amiss as someone half-Irish if I didn’t quote that other Irish thinker, Edmund Burke, who said that “All that it takes for the triumph of evil is for good men to do nothing.” It’s easy to feel intimidated by it all. But as J. R. R. Tolkien says through Frodo, who mentions “I wish that these things had never happened in my time,” we have a responsibility to respond, with Gandalf, that “So do all people who live to see such times.” We must do what we can with the time we are given.

Write to your Congressman. Write to your representative. Make the issues visible. In the UK over the last few years Catholic communities have organized Red Wednesdays to increase the visibility of issues like religious liberty and populations at risk of persecution for their beliefs: people wear red and public buildings and churches are lit up red to show support for those communities and raise awareness of those issues. 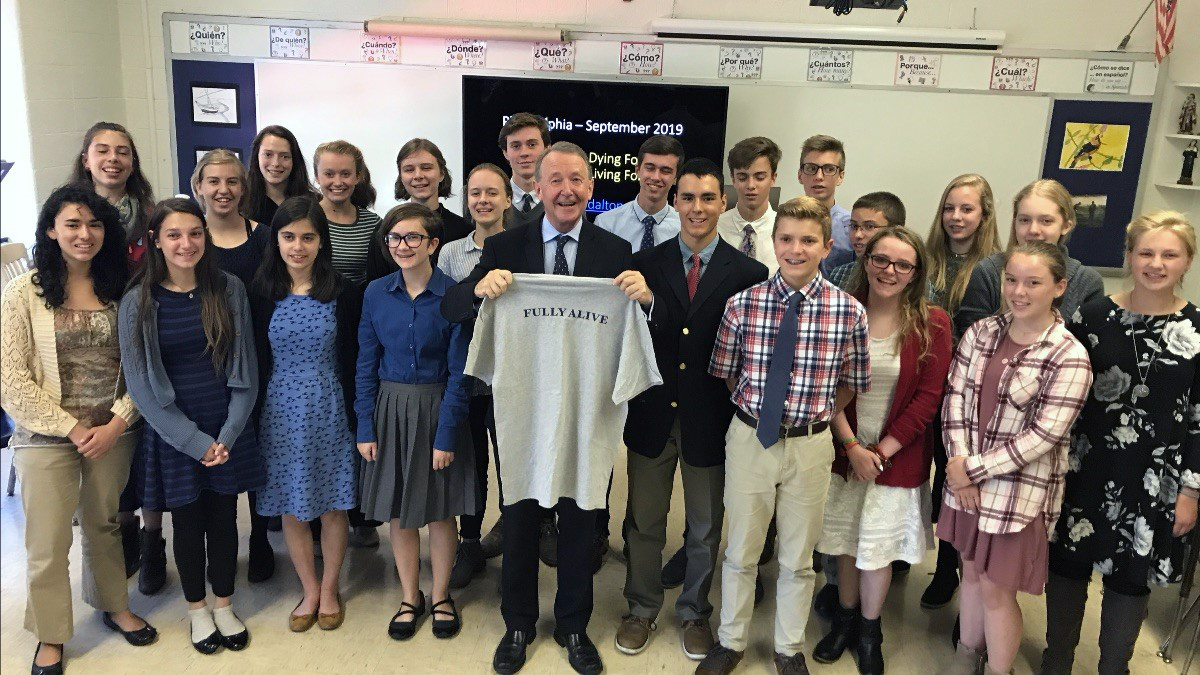 The students of Martin Saints Classical High School in Oreland give a warm welcome to Lord David Alton to their school Sept. 18.