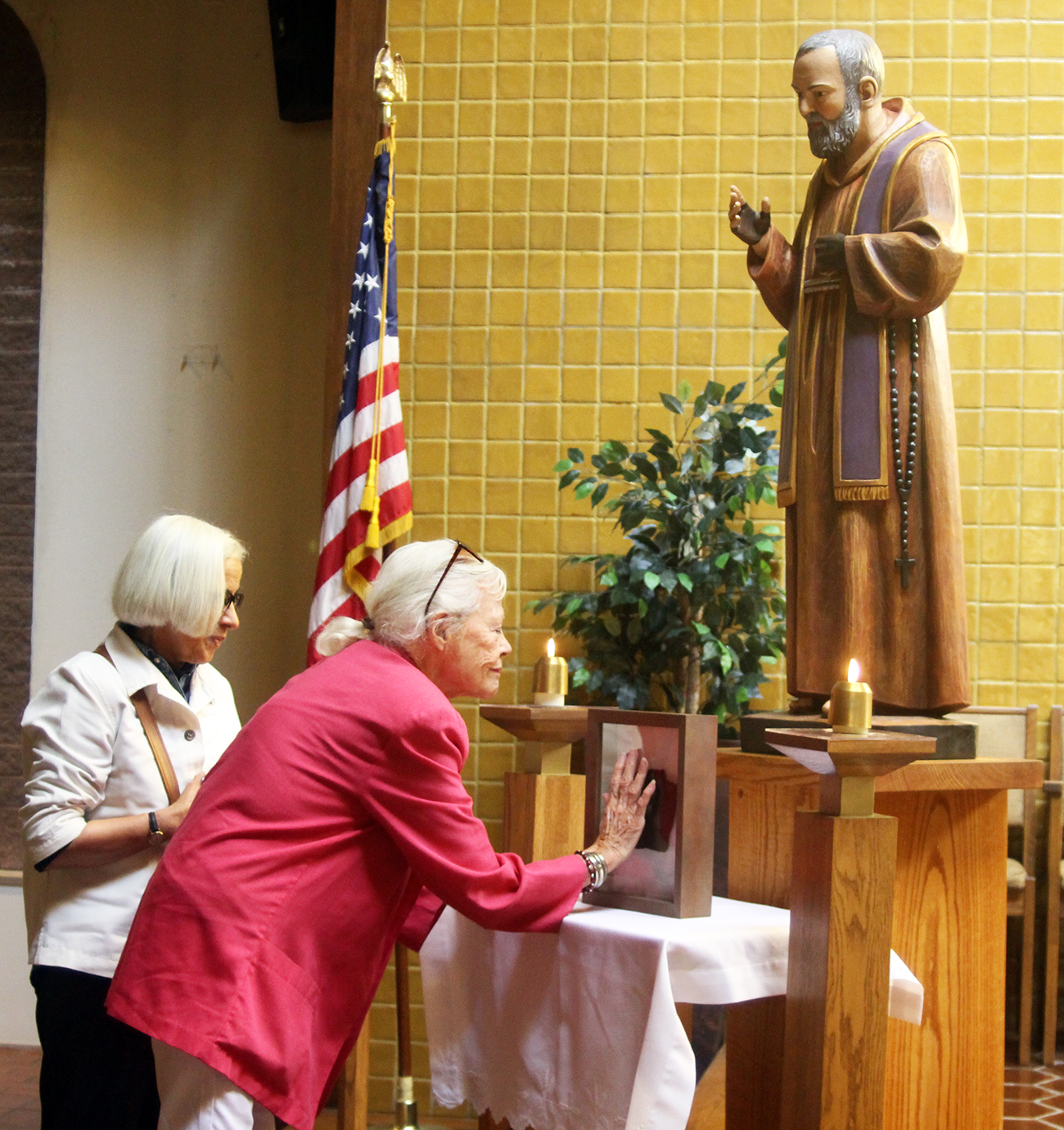 Attendees at a Sept. 21 celebration hosted by the Padre Pio Prayer Center in Philadelphia venerate a set of gloves worn by the saint, who received the stigmata (the wounds of the crucified Christ) following a mystical experience in 1918. (Photo by Gina Christian)

Over the past few weeks, Catholics throughout the area have been celebrating a modern saint known for his advice to “pray, hope and don’t worry.”

Prayer, processions and parties have surrounded the Sept. 23 feast day of St. Pio of Pietrelcina, popularly known as Padre Pio, who was canonized in 2002 by St. John Paul II.

Born Francesco Forgione in 1887, the native of southern Italy became a Capuchin friar in 1903 and was ordained in 1910. Despite a lifetime of ill health, he became internationally renowned for his spiritual direction and pastoral ministry, devoting his days to celebrating Mass and hearing confessions for hours at a time. He also founded a hospital, the House for the Alleviation of Suffering (Casa Sollievo della Sofferenza), that is now also a renowned institute for scientific and health research.

Following a mystical experience in 1918, Padre Pio received the marks of the stigmata, or the five wounds of the crucified Christ. The marks, which frequently bled, proved to be “a source of much suffering and marginalization” for him, said Capuchin Brother Andrew McCarty of the Padre Pio Prayer Center in the city’s Frankford section.

For that reason, Padre Pio usually covered his wounds with gloves, several of which are now relics. One such pair is located at the center, where it was venerated during a Sept. 21 gathering in honor of the saint.

The event drew some 60 attendees from several parishes for a talk, liturgy and outdoor luncheon at the center, housed in the former buildings of St. Joachim Parish.

During his presentation, offered in both English and Spanish, Capuchin Father Matthew Palkowski described Padre Pio as an “interesting character,” one who could be “gruff, even grumpy at times.”

“I don’t know that I’d want to go to confession to him, especially as a Capuchin myself,” Father Palkowski admitted, adding that Padre Pio often dismissed penitents insufficiently prepared for the sacrament, or demanded if they had any additional sins to name.

Yet such apparent harshness reflected the paternal anger of a God who “hates the sin that threatens to destroy the children made in his image and likeness,” said Father Palkowski. 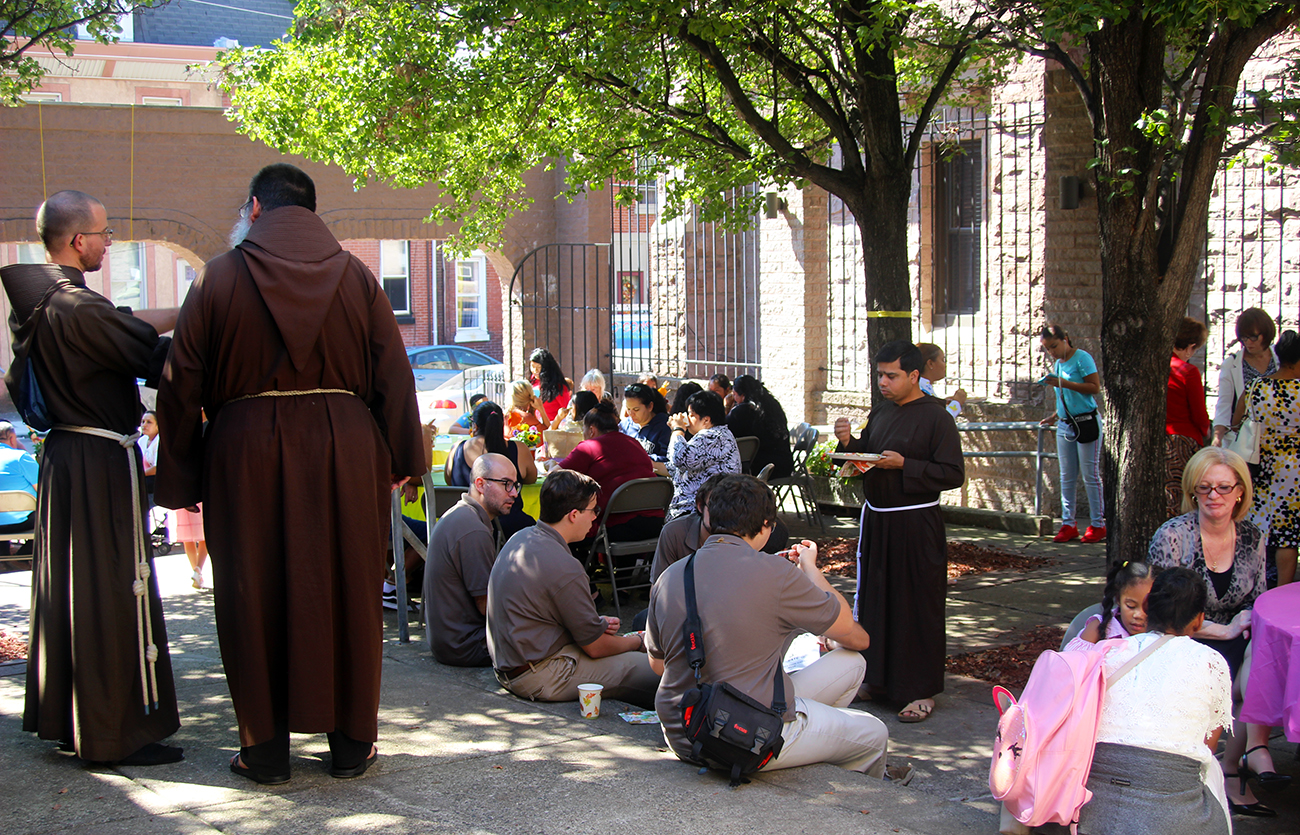 “Confession is love,” he said, noting that such spiritual cleansing leads to true healing of the soul, and enables the faithful to “bring the love of Christ to the world.”

Fellow Capuchin Father Pio Mandato celebrated special Masses during a two-day festival that drew some 2,500 from the tri-state area to St. Bede the Venerable Parish in Holland. A relation of the beloved saint, Father Mandato received his first Holy Communion from Padre Pio prior to migrating to America with his family in 1964.

Now a missionary hermit in the Diocese of Scranton, Father Mandato was the principal celebrant at the parish’s first Padre Pio festival in 2016, and returned for its fourth year.

A number of the saint’s relics were on display at festival, including a glove, pieces of his religious habit, and blood from his side wound. The collection was loaned by the Monastery of the Carmelite Sisters of Philadelphia as part of an effort to increase devotion to Padre Pio.

“Padre Pio is a saint for our time,” said Monsignor John Marine, pastor of St. Bede. “From heaven, he keeps building bridges through his miraculous intervention in the lives of countless people.” 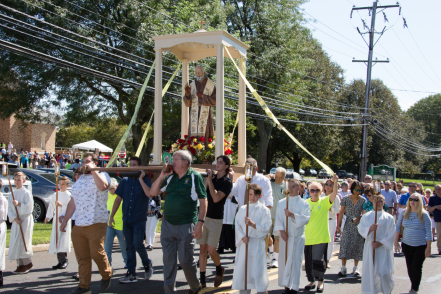 Parishioners of St. Bede the Venerable in Holland carry a statue of St. Pio of Pietrelcina, popularly known as Padre Pio, during a Sept. 14-15 festival in the saint’s honor. (Photo by Gary Gehringer)

Although many modern Catholics are often skeptical of relics, Brother McCarty notes that being able to touch the remains of the saints and their possessions “is a gift that increases our relationship with the holy ones.”

“We’re called to be buddies with the saints,” he said.

Both Brother McCarty and Father Palkowski said that such friendship, developed through prayer, enables the faithful to recognize Christ in the saints, and to make his presence known today by following their example.

In his talk, Father Palkowski asked attendees to reflect on how Padre Pio could help them in “making Frankford look more like the kingdom of God.”

According to Brother McCarty, Padre Pio got a head start on that very project. After the Capuchin order had purchased the former St. Joachim convent, he learned that several parishioners had prayed to the saint, asking that the St. Joachim worship site remain active and vibrant following a 2013 merger with Holy Innocents Parish. Eight friars and eight postulants are now in residence, with daily Masses and a number of active ministries taking place.

Father Thomas Higgins, pastor of Holy Innocents, said the arrangement was “a win-win for both parishes and the neighborhood,” and thanked Padre Pio “for allowing God’s love to thrive in Frankford.”

“I’ve always had an interest in Padre Pio, and have found his life story inspirational,” she said. “And I do believe that through his intercession we can bring the kingdom of God right here into our neighborhood.”

NEXT: Decline in baptisms, marriages seen as harbinger, call to community