Do most Catholics ‘get’ social justice? Not really, say experts 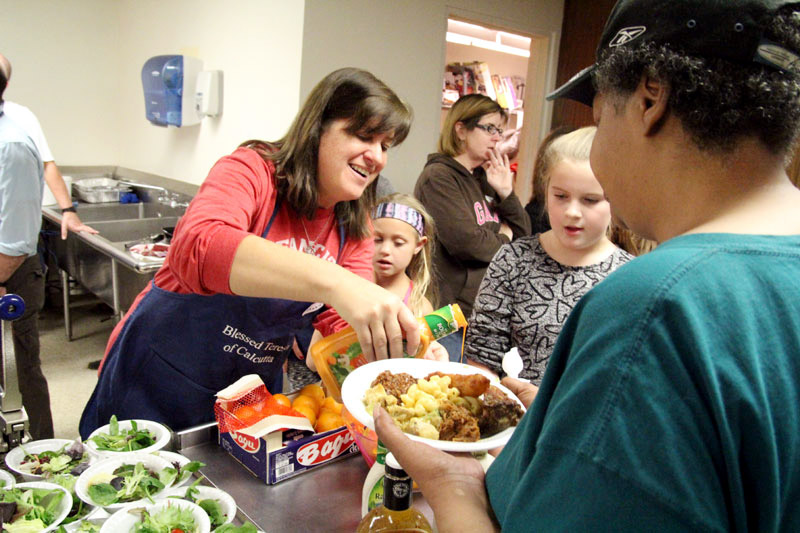 Marie Beehler, a member of St. Teresa of Calcutta Parish in Limerick, helps a woman put dressing on her salad as part of a volunteer outreach in Pottstown. Experts say many Catholics are often unaware of the church’s rich teachings on “social justice,” a concept that becomes more meaningful through active ministry focusing on specific areas of need. (Photo by Sarah Webb)

Amid what Santa Fe Archbishop John C. Wester recently called a “crisis of compassion,” the term “social justice” is on the lips of many pastoral leaders these days.

Dioceses, parishes and religious congregations usually have some sort of social justice coordinator, who advocates for faith-based responses to issues such as immigration, racism, poverty or climate change.

But for all the discussion and outreach, do Catholics in the pews actually understand what “social justice” means?

Not really, according to Craig Giandomenico, an adjunct professor of religion and theology at La Salle University in Philadelphia.

A term ‘loaded to the breaking point’

“It’s a term that history has loaded to the breaking point,” said Giandomenico, noting that “it’s important to unpack ‘social justice,’ especially given our heightened political climate.”

He said that “such a crucial time in the church calls for clearing up confusion over the terms we all tend to believe we are using in the same ways.”

Giandomenico observed that U.S. Catholics often find it harder to understand what social justice entails, given the nation’s “complicated history of struggling with the role of religion in the public sphere.”

As a result, he added, many “rank and file parishioners” tend to have “a privatized conception of the church’s ministry” that assumes the church only speaks to individuals, rather than communities, cultures and societies as a whole.

“Most (Catholics) are not aware of the long and rich tradition of Catholic social justice,” said Father Freund, whose congregation focuses on serving society’s poorest and most marginalized members.

Yet Sister of Mercy Suzanne Gallagher, who serves as her order’s justice coordinator, said that most Catholics may simply be “calling social justice by another name, such as the corporal and spiritual works of mercy.”

Scholars themselves debate the actual origin and scope of the concept, which is a specific form of the broader idea of justice. Several researchers claim that an understanding of social justice developed in the late 18th century, following the Industrial and the French Revolutions, as political and economic thought became more complex and modernized.

Others credit Italian Jesuit Luigi Taparelli D’Azeglio with coining the term in his “Theoretical Treatise on Natural Right Based on Fact, 1840-1843,” in which he urged a contemporary recovery of what Aristotle and Aquinas called “general justice.”

More recent commentators have continued to wrangle over what exactly “social justice” means. Some, including the late theologian and author Michael Novak, have claimed that the concept has been used by political progressives to attempt to curtail or even abolish free market capitalism.

“The more specific we are in our language, the less confusion,” he said. “’Catholic social teaching’ helps to remind the hearer that the issues at hand are directly related to their personal faith, which is perhaps too often mistakenly perceived as private.”

Pope Pius XI was the first to use the term “social justice” in Catholic teaching, according to Barbara Wall, associate professor of philosophy at Villanova University and editor of the Journal of Catholic Social Thought.

Over the following century, a wealth of reflection on social justice was produced, and under Pope (now St.) John Paul II, a Compendium of the Social Doctrine of the Church was issued in 2004.

Citing both the Hebrew prophets and the Gospels, the Compendium defines social justice as a “requirement” that “concerns the social, political and economic aspects,” and most especially the “structural dimension of problems and their respective solutions” (Compendium, 201).

Summarizing the Compendium, the U.S. Conference of Catholic Bishops (USCCB) lists on its website seven prominent themes in this instruction: life and dignity of the human person; call to family, community, and participation; rights and responsibilities; option for the poor and vulnerable; the dignity of work and the rights of workers; solidarity; and care for God’s creation.

A lived reality, not just an idea

But even with such guidelines, “most U.S. Catholics” know little about the church’s social teaching, although it’s “part and parcel” of the faith, said Wall.

That may not be too surprising, given an August 2019 Pew Research survey revealing that only about one third of self-identified Catholics in the U.S. believe in the Real Presence of the Eucharist – a statistic that could also indicate deeper issues regarding the effectiveness of catechetical programs.

“Catholic social justice is not a theory or an intellectual exercise, but rather how people of faith are called to live the Gospel in a broken and suffering world,” he said. “As Pope Francis reminds us in Evangelii Gaudium, ‘realities are more important than ideas.’”

Father Freund suggested eight ways to meaningfully support social justice movements: educating yourself on a particular movement, working to properly form your habits and beliefs, researching local efforts to assist relevant causes, taking action within your own community, attending a protest or a demonstration, using social media and volunteering your time for initiatives and organizations.

Sister Suzanne agreed that “the term ‘social justice’ can become relevant when we discuss specific situations,” and said that her order concentrates on “five critical concerns: peace and nonviolence, racism, care for the earth, immigration and women.”

Grounding social justice in practical examples — and in the framework of Catholic social teaching – keeps the concept from becoming too abstract, said Giandomenico.

“Catholic social teaching should remind us of those situations where the heart of the Christian mystery is laid bare,” he said. “These are situations so systemic in nature as to remind us of our common bond as humans, made in the image of God, and deserving of a shared, inviolable dignity.”