Half of Catholics attending Mass 28 years ago no longer do, figures show 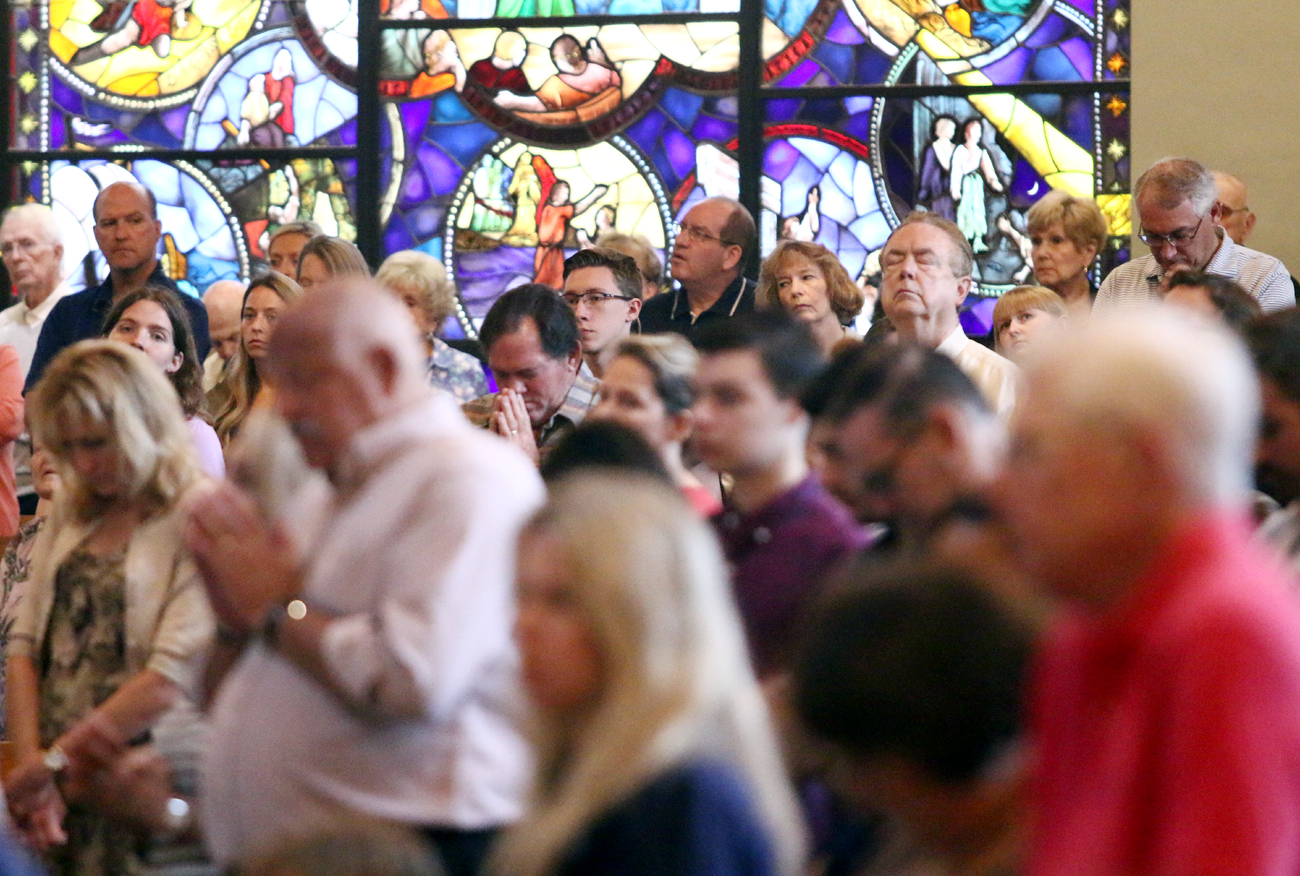 The faithful pray during a Sunday Mass at St. Andrew Church, Newtown, in July 2018. (Photo by Sarah Webb)

You may have noticed the space in church pews widening between you and your fellow Catholics attending Sunday Mass in recent years. It is not your imagination.

Mass attendance in parishes of the Archdiocese of Philadelphia has been dropping for years, and several factors have steepened the long-term pattern of decline to the point where today, half as many Catholics in the archdiocese attend Mass regularly as did a generation ago.

The findings of the latest October Count, an annual head count of people at all Masses in every parish for four consecutive weeks in October, show just under 200,000 people, precisely 199,101, attended Mass in the 214 parishes in October 2018.

The Mass census was begun in the archdiocese in 1990 and the first showed 416,137 attendees. That is a 52% decline in typical church attendance in 28 years.

Many factors help to explain the long pattern. They include cultural secularization in which people choose to walk away from their Catholic faith, and apathy in which they attend Mass less regularly, then not at all.

But the data suggest two significant factors: the clergy sexual abuse crisis and the closure of Catholic churches through parish mergers.

Reasons for the decline

Regarding the former, even though the decline in attendance was well underway for years, the largest percentage declines from year to year occurred during significant episodes in the abuse crisis.

The scandal broke nationally in the spring of 2002 in Boston, and by October in Philadelphia parishes, there was a 6% decline in attendance, followed by a 3.8% decline in 2003. 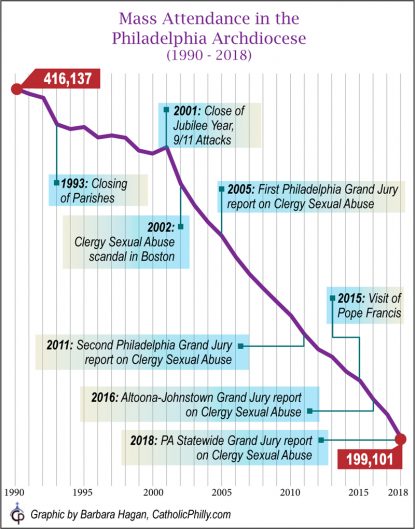 In September 2005 the first Philadelphia grand jury report on clergy sexual abuse in Philadelphia was released, and the October Count for that year reported a 2.7% decrease from the previous year. While that one year’s decline is not dramatic, it was followed by similar drops on average of 3.8% for six straight years, through 2010.

In the winter of 2011 the second Philadelphia grand jury report was released and three archdiocesan priests arrested. That October saw a 4.3% drop in Mass attendance despite the installation of Archbishop Charles Chaput in September.

In 2012 the Philadelphia Archdiocese’s dire financial condition came to light with massive underfunded debt obligations, a severe operating deficit, high-profile embezzlement, 25% staff reduction, closure or consolidation of scores of Catholic schools, the criminal trial and conviction of Msgr. William Lynn for endangering minors and even the folding of the archdiocesan newspaper, The Catholic Standard and Times.

By October of that year Mass attendance again slid another 3.6%.

A grand jury report on abuse in the Altoona-Johnstown Diocese was released in 2016 and across the state in Philadelphia, the October Count registered a dramatic 5.2% drop in Mass attendance, and 4.2% the next year.

The largest single drop in attendance, down 6.5%, came in 2018 when the scandal of the former Cardinal Theodore McCarrick came to light and a Pennsylvania grand jury released its findings, later contested, of clergy sexual abuse statewide.

Along the way in those years, numerous Catholic dioceses across the United States and the world would grapple with revelations of clergy sexual abuse and ineffective responses to it, and all of them coming to light drip by drip in the news media.

With each revelation of clergy sexual abuse, either locally, in Pennsylvania, nationally or globally, the trauma among the body of Christ manifested in a drop in parish Mass attendance in the Philadelphia Archdiocese. 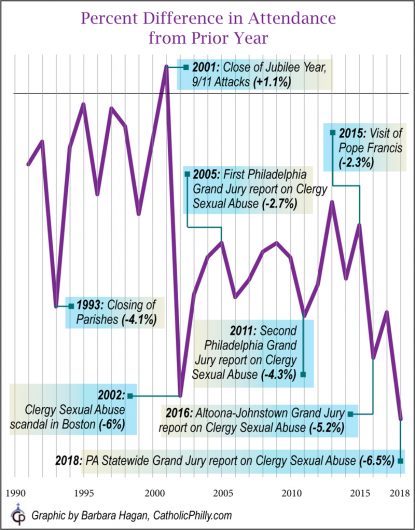 Besides the dropping numbers of Catholics in church on Sundays, there are 35% fewer Masses celebrated in the archdiocese since 1990 — currently 932, compared to 1,436 a generation ago.

The trend no doubt has been in the works for a long time, but at least one steep drop in attendance occurred in 1993 and not because of sexual abuse. A painful and contentious wave of 18 parish closures or mergers that year may well have contributed to the October Count’s 4.1% drop in attendance.

The closure of Catholic schools may have contributed to the 4% decline in 2011. But the mergers of 24 parishes into 10 in 2013 most likely contributed to the drop of nearly 2% that year. When 29 parishes merged into 13 in 2014, the October Count saw a 3.5% decline from the previous year.

The mergers of 2014, as archdiocesan spokesman Ken Gavin said at the time, were “due to a number of factors including a shift in Catholic population, a high density of parishes in a small area, as well as declines in Mass attendance, sacramental activity, the availability of priests to staff parishes and a review of facilities.”

At a recent panel discussion at St. Charles Borromeo Seminary, Archbishop Chaput noted that since his 2011 installation as archbishop of Philadelphia, 70 parishes had closed or merged.

Many of the churches that functioned as worship sites of the parishes into which they merged have by this time been closed entirely, if not sold.

Since 1990 the October Count data show one spike upward, in 2001 (along with modest rises in attendance in 1995 and 1997). The prior year was celebrated in the Universal Church as the great jubilee of 2000, and in the archdiocese significant public efforts at evangelization may have represented a boost in Catholics’ confidence and pride.

And since the October Count was performed only one month after the Sept. 11, 2001 terrorist attacks, many people’s renewed expression of faith during that time, if short-lived, most likely saw a carryover in attendance at Mass that autumn.

One other significant finding in the 2018 October Count is the positive effect of Catholic immigrants to the region as indicated in the number of Masses celebrated in other languages.

While English is still celebrated in English among 90% of Massgoers, Spanish is the language of 12,243 Catholics attending 45 Masses on any given Sunday in the archdiocese. Another 6,073 faithful participate in Mass in 41 other languages, mostly Vietnamese, Korean and Portuguese.

PREVIOUS: Where does major push to evangelize the young begin? With a party

NEXT: At the mountaintop: Half-century of change in Phila. Archdiocese