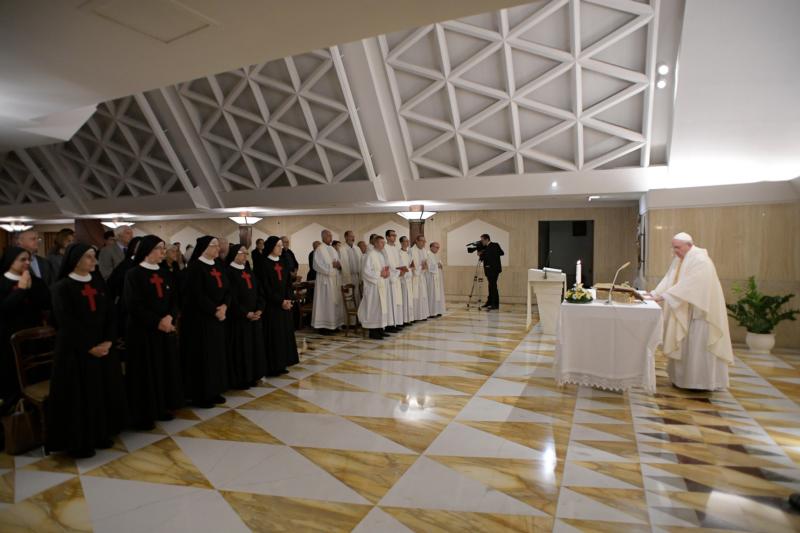 Pope Francis celebrates Mass in the chapel of his residence, the Domus Sanctae Marthae, at the Vatican Oct. 15, 2019. The pope, in his homily, said Christians must avoid hypocrisy by scrutinizing and acknowledging their own faults and sins. (CNS photo/Vatican Media)

Christians, in fact, must learn to avoid hypocrisy by scrutinizing and acknowledging their own personal faults, failings and sins, he said Oct. 15 during morning Mass at the Domus Sanctae Marthae.

“A Christian who does not know how to accuse himself is not a good Christian,” he said.

The pope focused his homily on the day’s Gospel reading (Lk 11:37-41) in which Jesus criticizes his host for being concerned only with outward appearances and superficial rituals, saying, “although you cleanse the outside of the cup and the dish, inside you are filled with plunder and evil.”

Pope Francis said the reading shows how much Jesus does not tolerate hypocrisy, which, the pope said, “is appearing one way but being something else” or hiding what one really thinks.

When Jesus calls the Pharisees “whitewashed tombs” and hypocrites, these words are not insults but the truth, the pope said.

“On the outside you are perfect, strait-laced actually, with decorum, but inside you are something else,” he said.

“Hypocritical behavior comes from the great liar, the devil,” who is a huge hypocrite himself, the pope said, and he makes those like him on earth his “heirs.”

“Jesus likes to unmask hypocrisy,” he said. “He knows it will be precisely this behavior that leads to his death because the hypocrite does not think about using legitimate means or not, he plows ahead: slander? ‘Let’s use slander.’ False witness? ‘Let’s look for an untruthful witness.'”

Hypocrisy, the pope said, is common “in the battle for power, for example, (with) envy, jealousies that make you appear to be one way and inside there is poison for killing because hypocrisy always kills, sooner or later, it kills.”

The only “medicine” to cure hypocritical behavior is to tell the truth before God and take responsibility for oneself, the pope said.

“We have to learn to accuse ourselves, ‘I did this, I think this way, badly. I am envious. I want to destroy that one,'” he said.

People need to reflect on “what is inside of us” to see the sin, hypocrisy and “the wickedness that is in our heart” and “to say it before God” with humility, he said.

Pope Francis asked people to learn from St. Peter, who implored, “Depart from me, Lord, for I am a sinful man.”

“May we learn to accuse ourselves, us, our own self,” he said.

PREVIOUS: In a mixed marriage, must children be baptized as Catholic?

NEXT: Gratitude keeps us free from the leprosy of envy