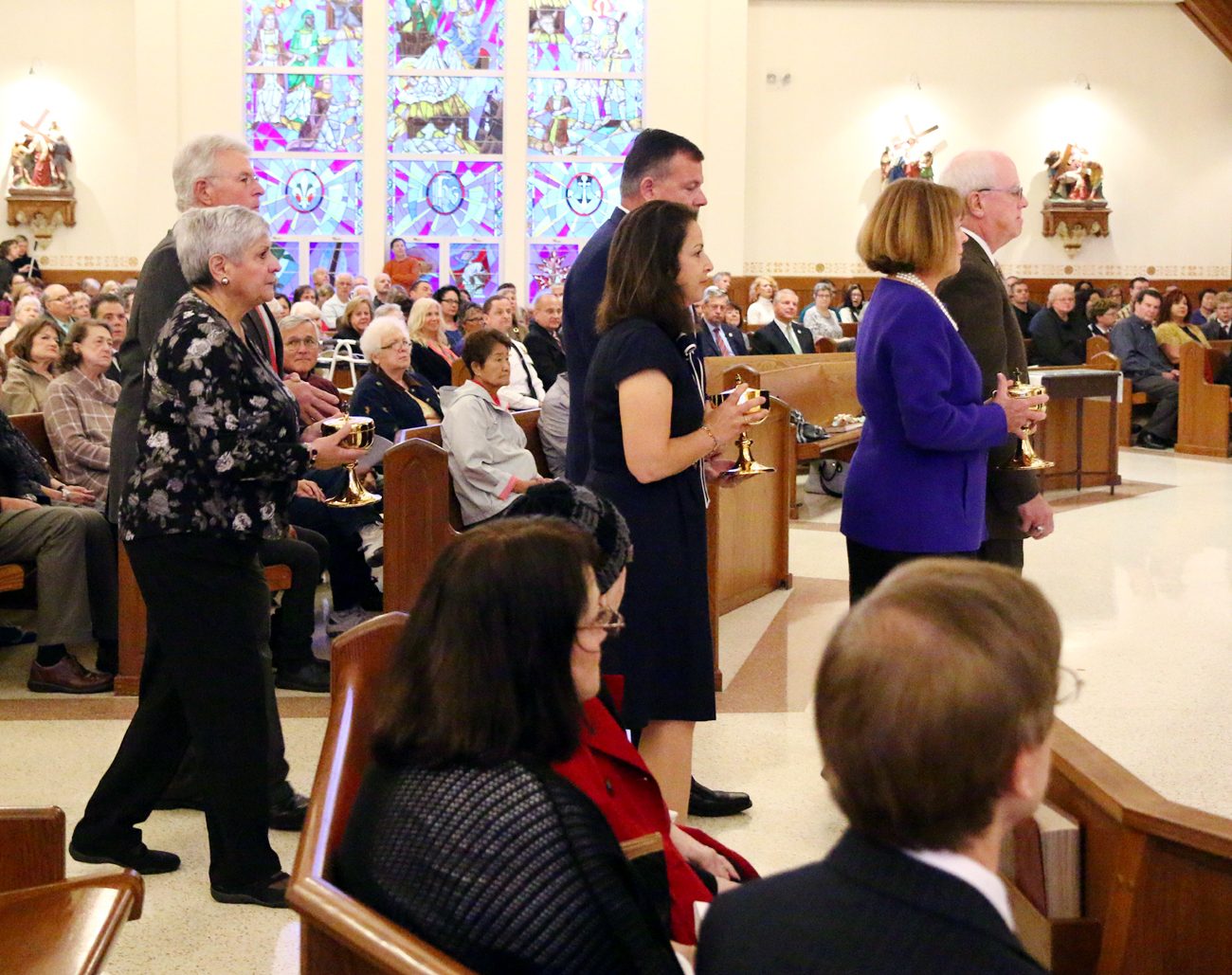 Couples bring up the offertory gifts during the 100th anniversary Mass Oct. 27 at St. Helena Parish, Blue Bell, for which Archbishop Charles Chaput was the main celebrant. (Photo by Sarah Webb)

The level of anti-Catholicism that existed in some parts of the Philadelphia Archdiocese just 100 years ago can still amaze you.

When the parish was founded in 1919, according to a parish history, the founding pastor Father Francis Higgins had to wear layman’s clothes when he was looking for a place to stay, because of local hostility to Catholics.

Luckily, he found an angel in local farmer Ellen Duddy, who donated two acres of her land for a church site. Father Higgins soon built a small church quite sufficient for the needs of the then 25 to 30 Catholic families in the area. When Duddy died a few years later she left the rest of her farm, about 90 acres, to the parish as well as the livestock, which helped fund future growth.

While the parish histories do not say, it probably received its name St. Helena because she is considered the patron saint for women named Ellen.

St. Helena Parish quickly prospered thanks to the eloquence of Father Higgins and, according to parish histories, the popularity of the Shrine to St. Therese of Lisieux that he established there.

The first little church erected in 1922 was quickly outgrown and replaced by a larger church in 1952, and in 2004 under Msgr. Joseph Nicolo, the current pastor, the impressive church in use today was dedicated. (See a 2011 CatholicPhilly.com story on the creation of artwork in the church, here.) 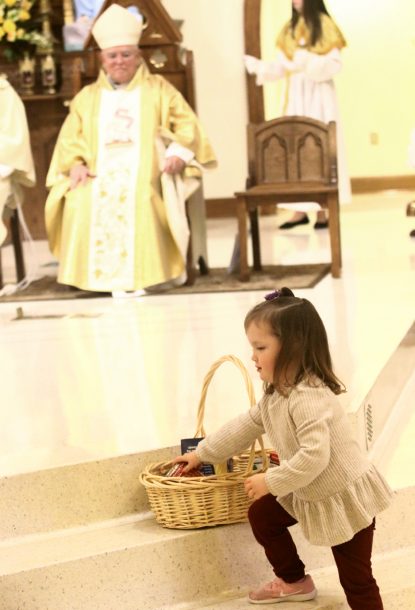 Young people of the congregation bring forward non-perishable food items for those in need, as Archbishop Chaput looks on. (Sarah Webb)

Meanwhile a school under the direction of the Religious Sisters of Mercy opened in 1949. It continues to prosper to this day but is operated by a lay faculty.

That tiny parish of 1919 has grown a hundredfold to about 2,600 families today.

Msgr. Nicolo points to recent developments including the opening of a chapel dedicated to St. Therese and a preschool with pre-K 3 and 4, and the Empress Room featuring catering facilities.

There are faith formation programs and study programs for all ages, an active Knights of Columbus council, a Senior Citizens Group and a Garden Club, just to name a few.

“When people come up with an idea, I say, ‘I’m willing to work with you to make it happen,’” Msgr. Nicolo said.

With all that has been going on in the parish, St. Helena’s has not forgotten the needs of others. One rather nice touch for the centennial celebration was recognition of a partnership with a parish in the South.

A representative who was on hand for Sunday’s anniversary mass was from St. Helena Parish in Clayton, Georgia. Their very first chapel, dedicated in 1961, was financed almost entirely by a monthly second collection from St. Helena’s in Blue Bell, according to that parish’s history, and the Georgia parishioners chose the name St. Helena for their church in gratitude.

“I’ve been in the parish since 1971,” said Helen Smith, “and we’ve come a long way since then. Msgr. Nicolo has done great things for the faith and he has built a beautiful church. It’s a very friendly parish with all kinds of activities. There is always something going on for young and old.”

“The Holy Spirit resides in our parish,” he said. “The activities and the school are phenomenal and with all of the activities, we serve God first.”

PREVIOUS: Parish life differs from decades past, but mission endures

NEXT: Conference reminds women they are ‘unique and unrepeatable’