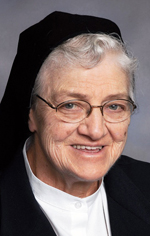 She entered the congregation of the Sisters, Servants of the Immaculate Heart of Mary on Sept. 8, 1955 and received her habit and religious name, Sister Mary Philomena, on March 8, 1956.

Sister Patricia’s last assignment was to serve in the Apostolate of Prayer at Camilla Hall in August 2015. She served most faithfully in all areas of her life until her death on Sept. 11.

Father Robert Berger was the celebrant and homilist of the funeral Mass Sept. 17 at Camilla Hall. The concelebrants were Msgrs. John J. Jagodzinski, Richard Malone and William Lynn, and Father Jonathan Sawicki.

NEXT: Sister of St. Joseph Helen Cantwell dies at age 87