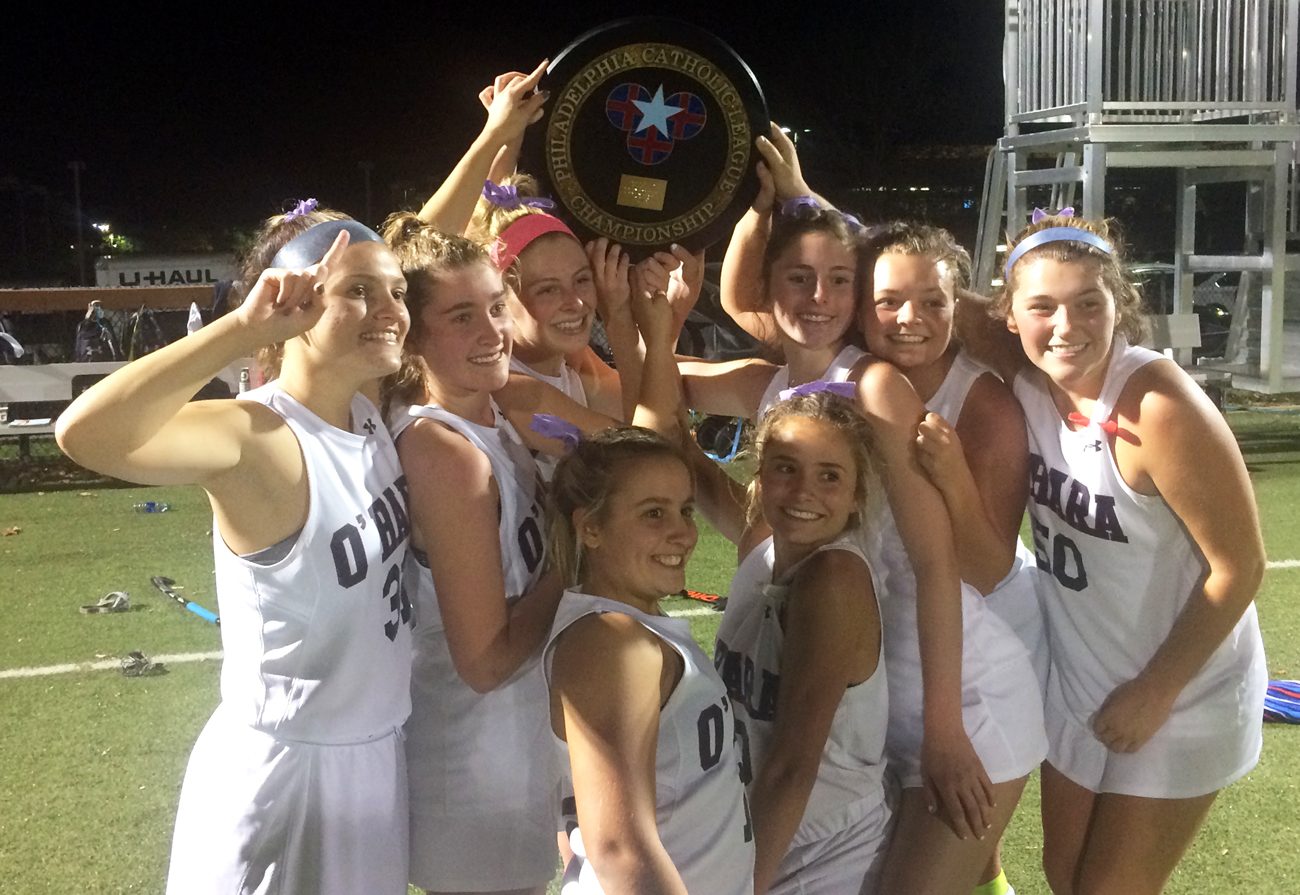 The scene of a familiar rivalry played out again Oct. 28 at Neumann University as Cardinal O’Hara squared off against cross-county foe Archbishop Carroll for the Catholic League field hockey championship.

For another season, the Cardinal O’Hara Lions took on the Archbishop Carroll Patriots to see who would take home the Philadelphia Catholic League (PCL) trophy.

Carroll entered the contest with a 9-1 league record of 9-1 while O’Hara was undefeated at 10-0. The two teams had a prior history of facing each other in the championship game so it promised to be taut throughout.

As the game turned out, regulation was not long enough for either squad to prevail so it went into overtime.

After 13 minutes of play in that extra frame, O’Hara’s Sara Grassi got the ball within scoring range and passed it to Mia Scarduzio, who then scored the winning goal that she had dreamed of her entire life as O’Hara edged Carroll, 3-2.

“It was unbelievable,” said Scarduzio with tears of joy in her eyes. “I just couldn’t believe it really happened to me.”

While Scarduzio’s goal at the right time ultimately sealed the victory, it would not have happened without trusting her teammates, all of whom believed in each other and never gave up.

Carroll’s Megan Curry secured the first goal of the game off a feed by Julia Kingsbury. O’Hara’s Scarduzio tied it up with a goal off a Katie Shallow assist. Carroll regained the lead with 7:51 to play in the opening stanza as Carleigh Connors scored assisted by Carly Bateman.

The period was not over yet as Grassi tallied a goal of her own and once again, Shallow provided an assist.

“I knew we had it in us to score and win,” said Shallow.

Neither team was able to score during the second stanza and the game went into overtime. The 2-2 score stayed tied for a while even though both teams threatened. With less than three minutes left, it appeared that there may be a second overtime.

But Scarduzio got to enjoy her moment in the spotlight, scoring the game-winner with 2:06 to go and O’Hara sealed the league championship for the first time in three years.

“Carroll is a really good team,” said Scarduzio. “We’re archrivals. They really tried their hardest. It was a hard game. We’ll get better going forward.”

Despite the loss, Carroll has plenty to be proud of since this marks its fourth straight year of playing in the Catholic League title game.

“It shows that we can really work together as a team,” said Curry. “We call ourselves a unit. We take pride in that. I’m really proud of the way we all performed tonight. While it didn’t turn out the way that we wanted, we definitely worked hard. I think everybody should be proud of the way they performed.”

“I think we have the best defense in the whole world,” said Travia. “Everybody trusts each other. We’re able to work everything out. There’s nothing our defense can’t do.”

The District 12 field hockey finals are set for Saturday, Nov. 2 at Germantown Supersite, and both Carroll and O’Hara have the opportunity to clinch a state playoff berth with a victory in the district round.

“We’re ready to move on to the next round,” said head coach Christina Elisio. “Hopefully, it takes us to the states.”