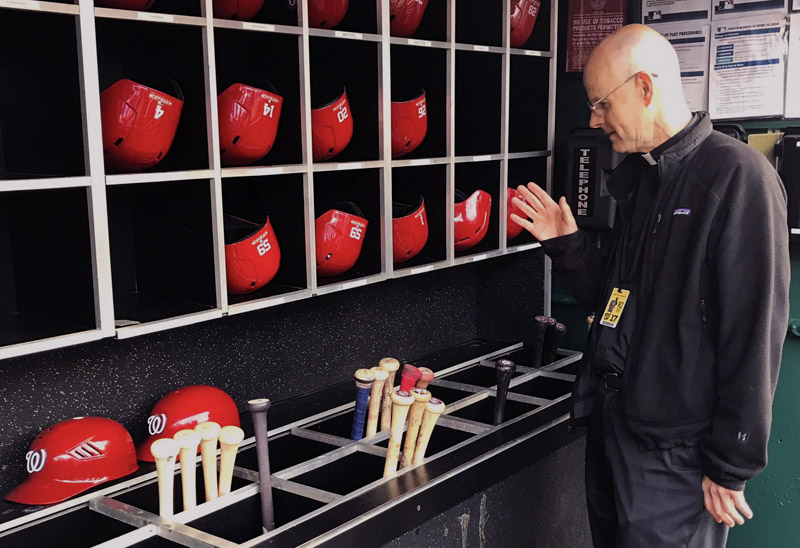 “Their witness is an inspiration not only to others in baseball but to all of us: ‘Stay in the fight,’ he said, referring to the team’s rallying cry.

Msgr. Stephen Rossetti, the team’s chaplain, said this baseball season in particular “carries a spiritual message and shows us how baseball, or any human endeavor, can truly be an inspired and grace-filled moment.”

The priest, a research associate professor at The Catholic University of America’s School of Theology and Religious Studies, told the university that the Nationals’ entire season was “plagued with heart breaks, injuries and challenges.”

“The outside world never considered the Nats as serious contenders for the World Series, but they believed they could do it and prayed to God for the strength to stay in the fight. They faced four elimination games and came from behind again and again to win these last-ditch efforts,” he added.

Msgr. Rossetti’s role with the team involves what most parish priests do. He celebrates Mass, baptizes babies, gives marriage preparation talks and provides pastoral care that often involves listening to people or praying with them.

The priest spoke to Catholic News Service on campus Oct. 21, the day before the opening game of the Fall Classic — in between meeting with someone who wanted prayers and teaching a class on pastoral counseling to seminarians — which is his day job

He attended World Series games in Washington, and before the home game Oct. 27, the priest celebrated Sunday Mass for the team and staff members in a conference room at Nationals Park.

He spoke to Catholic News Service on campus Oct. 21, the day before the opening game of the Fall Classic — in between meeting with someone who wanted prayers and teaching a class on pastoral counseling to seminarians — which is his day job.

Msgr. Rossetti, from the Diocese of Syracuse, New York, spent more than 12 years at the helm of the St. Luke Institute, a treatment center in Maryland for priests and religious with addictions or psychological problems. He also has written several books about the priesthood.

But for the past 10 years, he also has been part of the Nats’ family, ever since the previous chaplain told him he needed a replacement. Msgr. Rossetti had been riding his bike to catch games of the newly named Nationals (previously the Montreal Expos) when they came to the city in 2005 and played at RFK Stadium, three years before Nationals Park opened, so he jumped at the chance to be part of this ministry.

He relates to the players “as people not as stars or public figures” and sees his role as “ministering to people with their hopes and dreams, sorrow and difficulties. It’s why you become a priest.”

So, when team members are up at the plate, he knows where they are coming from and about their families. He roots for them, of course, thumbing his rosary beads while others wave aloft red foam fingers.

It turns out, Msgr. Rossetti also is “a big rosary fan.”

“I say the rosary all the time anyway, but somehow when the game gets tight, I’m always thumbing my beads. I realize that God loves both sides and I pray for both sides, but I think that he knows that I’m rooting for the Nats,” he confessed.

The spiritual analogies for this season alone aren’t lost on him either.

The team’s essential motto of “stay in the fight” — describing how they were 12 games under .500 early in the season all the way up to their win in the National League Championship Series — is all about not giving up and having hope, which Msgr. Rossetti says the players held onto when others may have given up on them.

“I gave a homily to the guys at Sunday Mass a few weeks ago and I said that the virtue of hope is so important to all of us because all of us have times in our lives when times get tough and we need to realize that God is still with us and loves us — so don’t give up hope and stay in the fight,” he encouraged them.

The priest said his role with the team isn’t just for the Catholics. “Many of the guys who are not Catholic very much appreciate the presence of a priest and ask you to pray for them so I’m always blessing them and blessing their bats and praying for them when they’re ill. It’s a nice ministry to be able to walk with them, whether they win or lose,” he said.

CNS attempted to reach Msgr. Rossetti’s counterpart with the Astros, but Ray McKenna, president of Catholic Athletes for Christ, said the Astros and Colorado Rockies are two U.S. baseball teams without a Catholic chaplain.

This is not Msgr. Rossetti’s first rodeo as a chaplain. In 2011, he spent the month of December in Antarctica as the Catholic chaplain to the American and New Zealand communities working for the National Science Foundation.

He said today’s church has changed and he is fine with bringing a church presence to where people are.

“In the old days, we would kind of wait for people to come into the church, but today a lot of people don’t come to church, and part of the new evangelization is meeting people where they’re at.”

During baseball season, there are roughly 40,000 people in the stadium, so the priest walks around and talks with ushers, staff, reporters and fans, some ask for prayers or blessings, he added, so he sees it as a way of “bringing church to people and bringing blessing to people.”

“It’s a great ministry,” he said, and not just during winning seasons.

A few years back, he said, things weren’t going well for the team after they lost their 10th game in a row, so he thought he should go down to the locker room.

“I went down there and there was this gloom,” he said, adding that one of the players who had been looking down, looked up at him and said: “Boy, do we need you.”

“So, I especially try to be there when things aren’t going well,” he added.

But he’s certainly there in good times too. He was there in the locker room Oct. 15 after the team swept the St. Louis Cardinals in four games to win the National League pennant and there was “champagne everywhere,” which he tried not to be covered with.

He can’t help but take in the feeling this season with the Nationals’ first World Series.

“There seems to be a special spirit around the team; you feel it. It’s kind of like it’s their year.” He said he’s never seen such a “positive joyful spirit” with the players as he has this year, demonstrated by dancing in the dugout even by more reserved players.

“There is a sense of mutual respect, camaraderie and love and they just seem to be happy,” he added.

NEXT: Win or lose, baseball is better with faith, former Astros batboy says