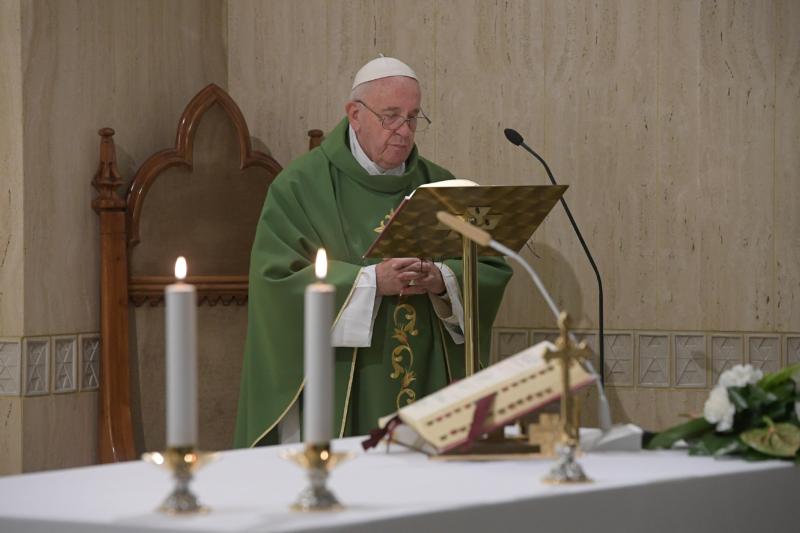 Pope Francis celebrates morning Mass in the chapel of his residence, the Domus Sanctae Marthae, at the Vatican Nov. 5, 2019. (CNS photo/Vatican Media)

VATICAN CITY (CNS) — In life, Christians face the choice of either being open to encountering God’s generosity or closed in on their own interests, Pope Francis said.

The banquet that Jesus often refers to in his parables “is an image of heaven, of eternity with the Lord,” the pope said Nov. 5 in his homily during morning Mass at Domus Sanctae Marthae.

However, he added, “in front of that gratuitousness, the universality of the feast, there is that attitude that closes the heart: ‘I am not going. I prefer to be alone (or) with people that I like. Closed.'”

“This is sin, the sin of the people of Israel, our sin. Being closed,” the pope said.

The day’s Gospel reading from St. Luke recounted Jesus telling the parable of a rich man whose invitation to a great banquet was refused by those he invited.

Angered by their refusal, the man instead commands his servants to invite “the poor, the crippled, the blind and the lame” while assuring that “not one of those who were invited shall have a taste of my banquet.”

Those guests who “tell the Lord, ‘Don’t disturb me with your feast,'” Pope Francis explained, close themselves “to what the Lord offers us: the joy of the encounter with him.”

For this reason, he said, Jesus says that “it is very difficult for a rich man to enter the kingdom of heaven.”

“There are good rich people, saints, who are not attached to wealth,” the pope said. “But the majority are attached to wealth, closed. And that is why they cannot understand what the feast is. They have the security of the things they can touch.”

While others may refuse to encounter God because they do not feel worthy, Pope Francis said at the Lord’s table, “all are invited,” especially those who think they are “bad.”

“The Lord waits for you in a special way because you are bad,” the pope said.

“Let us reflect on the parable the Lord gives us today. How is our life going? What do I prefer? Do I always accept the Lord’s invitation, or do I close myself in things, in my little things?” he asked. “And let us ask the Lord for the grace of always accepting to go to his feast, which is free.”

NEXT: Wordlessness of ‘a thin place’ draws us to deepest things