One of the interdisciplinary student teams at Villanova University's Nov. 15-17 "hackathon" to develop blockchain solutions for combat poverty was the above group that developed "Do4Nation," a web-based application that donates leftover dining-hall meal swipes to nonprofits through tokenization. From left are sophomore Steven Guachichullca of the School of Business, junior Rahul Thapa of the College of Liberal Arts and Sciences, freshman Stephanie Frank of the School of Business and, serving as the group's professional mentor, Peter Okello, a software engineer at Dell Computer Co.

An “idea hackathon” on the weekend of Nov. 15 at Villanova University had an ambitious goal: develop ways to use blockchain technology to address the causes and symptoms of poverty.

Blockchain, the technology behind such digital currencies as bitcoin, is a means of performing digital transactions securely and without intermediaries such as banks or other financial service providers.

The mission of the weekend event was partly the brainchild of Pritpal Singh, professor of electrical and computer engineering, to bring together students from different academic areas and backgrounds to look at how this emerging technology might be applied to help the immediate needs of people living nearby.

“We decided we wanted to do something locally, looking at poverty in the Philadelphia area,” said Singh. “We wanted multi-disciplinary teams, so through contacts in the business school, nursing school, college of liberal arts and sciences, the law school and the engineering school, we recruited students through different advisers in the different colleges.”

Barbara Wall, vice president of mission and ministry as well as University President Father Peter Donahue and professor Mike Pagano of the business school threw their support behind the project and helped procure participation from local organizations like R3, Risk Stream and Spiritus.

Representatives from those companies joined the hackathon on Friday, Nov. 15 to talk to the participants about both blockchain technology and the issues facing impoverished people in Philadelphia and the surrounding area.

After these sessions, the 50 students broke into 10 groups and began discussing their ideas while mentors from the school and local business organizations offered their help.

William Collins of Berwyn was one of the participants. A graduate student in the university’s cybersecurity program, Collins was excited to get involved.

“The whole idea that you can use blockchain to address poverty issues is very appealing to me to understand,” he said. “Philadelphia is one of the most poverty-stricken of the top cities in the country, so it’s a good time to try to brainstorm ideas.”

Collins’ group wanted to help people seeking employment who may have had trouble doing so in the past by using blockchain technology to maintain better and more accessible records on education and work history.

“Our thesis is that we can make it easier for both employers and employees, particularly for people who may be coming out of situations that may make them seem less credible to employers.”

Hasshi Sudler, a Villanova alumnus and adjunct professor in the university’s College of Engineering who teaches cyber security and blockchain technology, explained why using it could greatly benefit underserved communities.

“There is a large population of people who cannot get bank loans or even bank accounts,” said Sudler, who is also CEO of the cyber security firm Internet Think Tank. “Using blockchain technology could be a game-changer for regions across the country and around the world where people are unable to engage in financial markets. For example, it is possible to apply the unique features of blockchain to create a community currency that a region could use to uplift its local economy.”

Participants in the hackathon were expected to have their presentations ready for judging by early Sunday morning, Nov. 17.

The eight projects that emerged from the weekend included using blockchain to track and evaluate government aid programs, incentivize healthy eating, increase education and skills by funding programs for the working poor and much more.

See all of the presentations here.

The winning team, which received a cash prize, developed a project that used blockchain to address the credit struggles of impoverished people. Their system, dubbed Trustcoin, would help clarify the credit system, teach people to more effectively manage their credit and include a system that actually improves a person’s credit and helps to pay debts on time using Trustcoin.

Now that the top presentations have been chosen, Villanova faculty members will review them and consider turning them into formal projects. 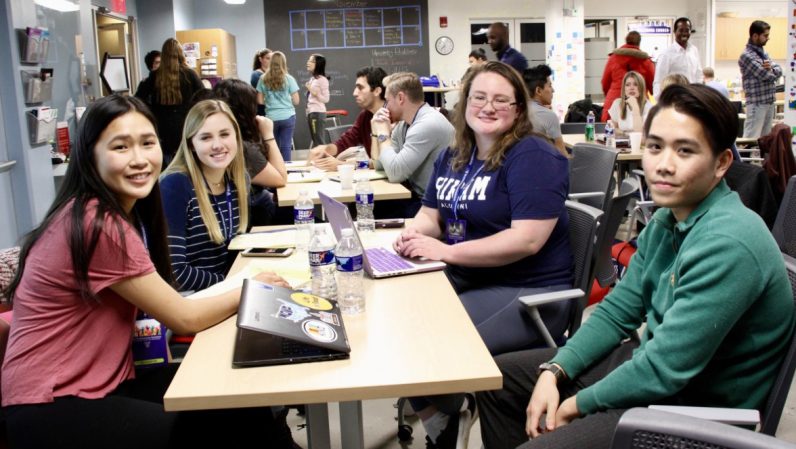 Villanova University students participating in the blockchain development event Nov. 15-17 include, from left, Kristen Chou, Maranda Peak and Ann Riddle, along with a company representative of R3, a blockchain software firm based in New York, which cosponsored the event.