From birth, Christ reveals the Father and his love for the poor 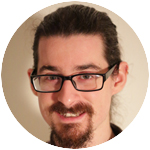 God is telling us about himself through the birth of his Son. The Gospel of Luke presents a beautiful birth story for Jesus, rich in divine revelation, that’s also poignantly narrated by Linus in the movie “A Charlie Brown Christmas.” The last line of the prologue to John’s Gospel (Jn 1:1-18) presents an interesting backdrop for the Luke birth narrative: “No one has ever seen God. The only Son, God, who is at the Father’s side, has revealed him” (Jn 1:18). Not only has the Word become flesh to live with us, Jesus is revealing his Father’s heart from the moment of his birth.

Between our various moves and kids, we lost all our cheap ceramic Nativity figures. When we pulled out our Nativity set this year, all I found was Balthazar, one sheep and the barn itself.  So we made clay figures and baked them solid. It was a “to do,” but it was fun.

I thought I’d stick with a really abstract shape that didn’t require features I didn’t have the skill to pull off. My six-year-old daughter was much more daring. I was stunned to see that her shepherds had pupils and irises. A mixture of pride in my daughter, shock at her superior sculpting skills and the reality of the shepherds hit me all at once.

My daughter’s full-eyed shepherds reminded me that real people were startled by angels that night when the Word became flesh. And the sign promised to them, “you will find an infant wrapped in swaddling clothes, and lying in a manger” (Lk 2:12), was not just some cute trope, but the first act of physical revelation of God the Father.

The shepherds then sought out the baby Messiah “in haste”– perhaps even at the risk of their jobs, unless the sheep were quite agile. Once the herdsmen showed up at the manger, they shared with Mary and Joseph the encounter they’d had with the angels: “All who heard it were amazed by what had been told them by the shepherds” (Lk 2:18).

In this Advent season, I reflect on how Luke, writing his Gospel, may have heard the whole story of Christ’s birth directly from Mary. I think often on what that conversation was like; its depth, its tangents, and its tone. My awareness of Mary deepened when a young lady from Egypt showed up at our food pantry the other day with her mom, wanting to volunteer as a translator. I was happy, because we really need translators. I had been praying for Arabic translators, but I was still taken aback at seeing, on the day I’d decided to write this article, a person whose appearance reminded me of the Blessed Mother on Christmas night.

The Savior of the universe was born to a girl, protected by a man faced with a very confusing situation, who nonetheless trusted in God all through the process of delivering the divine child in some sort of barn. After the birth, they recovered in the presence of the lowly, who came to sit by God sleeping in an animal trough, an infant king announced in the fields by angels to people of no consequence.

Salvation’s story begins with a clear line to the poor. God doesn’t just point a finger to them, as if to simply say: “Do right by these folks.” Rather, sends a host of angels to announce and sing praise for the Incarnation. He sends them to shepherds at work, and makes his announcement to them first, which will be “for all people” (Lk 2:10). The glory of the Lord “shone around them” (Lk 2:9); God embraced them. He called them to come to him, to the labor recovery portion of the birth of his Son. In the midst of the blood and water of birth into life, God’s Son comes to dwell with a young couple surrounded by random poor shepherds, some of them likely children.  These were the first invited to the table of salvation.

Not just symbolic or artistic, it is an invitation to relationship, a gratuitous gift, a celebration. Jesus is revealing the Father, and in the process, setting priorities, welcoming the poor and teaching his mother and the world who he is.

Patrick Walsh manages Martha’s Choice Marketplace, a choice model food pantry at Catholic Social Services’ Montgomery County Family Service Center. He can be reached at pwalsh@chs-adphila.org. More information about Martha’s Choice, a beneficiary of the Catholic Charities Appeal, can be found at www.marthaschoicemarketplace.com.

PREVIOUS: God’s love and mercy, in person of Jesus, pierces through darkness

NEXT: Can a gay person distribute holy Communion?