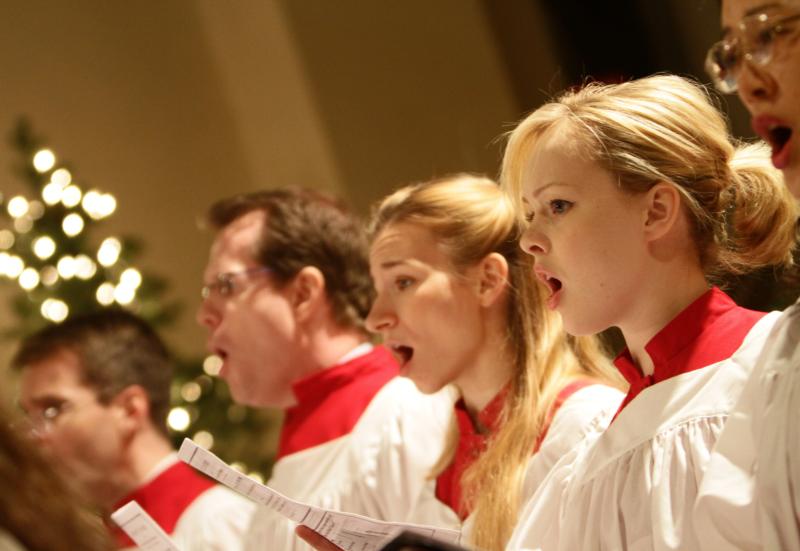 Members of the choir sing during the annual Christmas concert at St. Malachy’s Church — The Actors’ Chapel in New York. Handel’s “Messiah” is more of a meditation than a story, in which the solo singers do not play a particular character but rather sing verses selected from throughout the Bible to tell what, for Christians, is the overarching story of the whole Bible: the foretelling, the coming, and the life, death and resurrection of the Savior. (CNS photo/Gregory A. Shemitz)

The “Hallelujah” chorus from George Frideric Handel’s “Messiah” is probably the most well-known classical piece of music written for choir. People love to hear it, and they love to sing it.

If you have sung in a high school, college or church choir, chances are that you have sung it at some point in your life, either around Christmas or Easter or both.

And so the question arises: Is there more to Handel’s “Messiah” than the Hallelujah chorus?

To understand Handel’s “Messiah,” it is helpful to go back to the year 1600. Within a decade on either side of that year, two very important musical forms came into being: the opera and the oratorio.

Opera is essentially a play using only music, with no speaking. The individual characters sing in two different ways.

Most of the action takes place through what is called recitative, a sung recitation in which the singer can sing quite a lot of text in a short amount of time. Most of the singing time is taken up by the arias, the beautiful songs, often with just a phrase or two of text and several minutes of music.

Operas usually have choruses, where all the singers collectively comment on or take part in the action. And at times just the instruments play.

Handel’s “Messiah” is an oratorio, which is like an opera but without the movement and staging. Unlike operas, oratorios are typically about sacred subjects. Like operas, however, they typically tell a story, often from the Old Testament.

But Handel’s “Messiah” is not your typical oratorio.

It is more of a meditation than a story, in which the solo singers do not play a particular character but rather sing verses selected from throughout the Bible to tell what, for Christians, is the overarching story of the whole Bible: the foretelling, the coming, and the life, death and resurrection of the Savior, the Messiah.

“Messiah” tells that story in three parts. The first part, the part about Christ’s coming and earthly ministry, the most commonly performed part around Christmas, has five different scenes.

The text for the first scene is entirely from the prophet Isaiah, who foretells the coming of the Messiah. Handel fittingly begins with the first verse of Chapter 40: “Comfort ye, my people, saith your God.”

At its heart, the coming of the Messiah, the anointed one who will save his people, is a message of comfort, of strengthening for those who are weak because of their sins.

Even though this movement is a recitative, the first part of it is an accompanied recitative, which tends to be more song-like. For the phrase, “Comfort ye,” the tenor soloist descends gently by a step for each note and ends on the third note of the major scale, often known for its sweetness.

The very first musical and textual message of Messiah is the rest and peace that the Savior’s coming will bring.

While the first scene speaks generally of the revelation of the glory of the Lord, the second scene tells us that the Lord’s coming will be sudden and will purify his people.

The third scene then focuses on prophecies of Christ’s birth, beginning with a beautiful recitative by the alto soloist, “Behold, a virgin shall conceive,” from the prophet Isaiah, quoted also in Matthew’s Gospel. Christ is foretold as the light that is coming to save those who walk in darkness.

The scene ends with one of the most energetic choruses from the whole Messiah, “For unto us a child is born.” Handel has each of the four parts of the choir express Isaiah’s prophecy joyfully by singing many quick and bouncy notes all on the word “born.”

The fourth scene is the fulfillment of that prophecy: the story of the birth of Christ in the Gospel of Luke, with the soprano soloist singing four short recitatives telling the story of the angel’s announcement of Christ’s birth to the shepherds. The whole choir then sings the part of the angel chorus: “Glory to God in the highest!”

The fifth and final scene of the first part focuses on the peace and healing and rest that Christ will bring, ending with perhaps the most beautiful chorus of the whole Messiah, “His yoke is easy, and his burden is light.”

But we must not forget about the chorus that concludes the second part of Messiah, which tells the story of Christ’s passion, death, resurrection and ascension: the famous “Hallelujah” chorus. Whether it is added on to the first part around Christmas or sung most fittingly at Easter, it expresses the joy of the everlasting salvation brought by the Messiah, who shall reign for ever and ever.

As we approach the celebration of our Savior’s birth at Christmas, consider attending a performance of Handel’s “Messiah” if there is one in your area, or check out the King’s College performance on YouTube. You will have not only the pleasure of listening to beautiful music but the joy of healing your soul with the story of our salvation.

Father Vincent Ferrer Bagan is a Dominican friar of the Province of St. Joseph. He has worked as a school music teacher and church music director and presently teaches music and theology at Providence College in Rhode Island.

PREVIOUS: How parishes can engage those Christmastime visitors

NEXT: Italy’s Christmas specialty bread made at home — Panettone