No room at the border: A timely new Christmas tradition 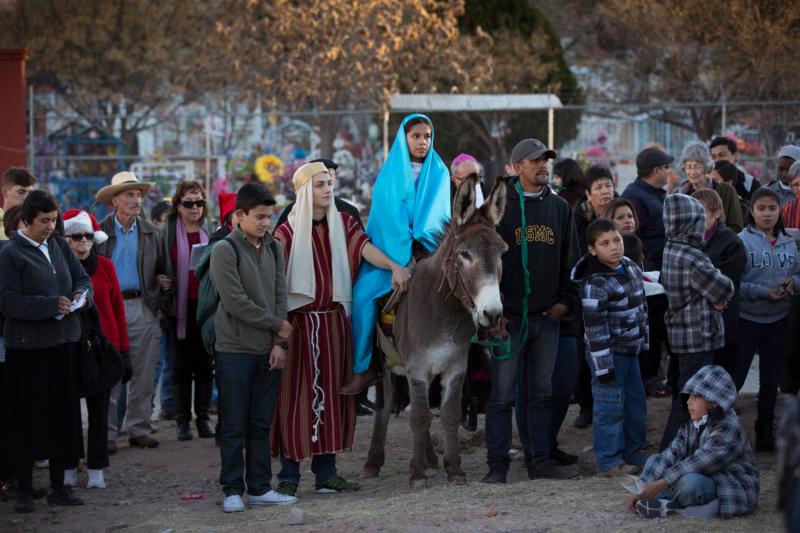 People from the U.S. and Mexico take part in a “posada,” the commemoration of Mary and Joseph’s search for shelter in Nogales, Mexico. The annual Nogales event held by the Kino Border Initiative and Dioceses Without Borders reflected on the struggles of migrants and migrant families. (CNS photo/Nancy Wiechec)

As the Advent season unfolds, Sister Engracia Robles and her team of religious and volunteers prepare for the traditional celebration known as “Las Posadas,” at the Comedor (soup kitchen) of the Kino Border Initiative in Nogales, Sonora, located a couple hundred yards from the border between Mexico and the United States.

They are hungry, cold, tired, broke and disheartened, hoping to get a warm meal and a place to stay for a few hours before continuing their journey to the U.S. Many of those knocking at Sister Robles’ door are also Mexicans who have been deported and find themselves alone and in desperate situations.

“I have seen fathers and mothers crying, seeing all they have built in the U.S. destroyed. They see themselves here without their families, without their homes, and they’re here alone with nothing,” Sister Robles, a Missionary Sister of the Eucharist, said.

The binational Posadas, celebrated this year on Dec. 14, starts with a procession along the border wall with about 150 people following on both sides as a way of bringing people from the two countries together. Local high school volunteers play the Holy Family; expectant Mary rides a donkey, while Joseph leads the way.

The first stop takes place along the border, the Holy Family on the Mexican side asks for “posada” or shelter to those on the U.S. side, and as the tradition goes, they are rejected. The walk of the Holy Family asking for shelter from one country to another has a lot of symbolism for Sister Robles and others, who often see thousands of hopeful migrants facing hardships to reach the U.S.

“Mexico asks the United States for posada and then the U.S. side responds. It is as if Latin America asks the U.S. for shelter,” commented Sister Robles.

The Posadas prayers and reflections drafted by Sister Robles focus on the most pressing issues that immigrants face. This year it will focus on asylum. Other years they have focused on family separations.

“What inspires me is the desire for justice. I know it’s a utopia, but I want to make visible the realities of those who seek asylum, of migrants who walk through the desert and are rejected. They experience many situations of injustice,” Sister Robles said.

The procession continues on the Mexican side, and besides migrants, locals and volunteers, Catholics from the Dioceses of Tucson and Phoenix in Arizona participate in the one-mile procession that involves prayers and singing traditional Christmas carols along six stops. The ambiance is reflective, celebratory and hopeful, particularly from those who shortly will continue their journey to an uncertain future.

The Posadas end back at the Comedor, where the Christmas celebration begins and the migrants enjoy traditional meals prepared by dozens of volunteers, like turkey and tamales, while children hope to grab candy and favors as they take turns to break a piñata.

During the celebration, participants also listen to a reflection and story of a migrant like them. The testimony is aimed at giving them strength and hope, and to know that they are not alone.

Sister Robles, who has worked at the Comedor since its beginnings, says she is always surprised at the emotional resilience and the strong faith that most migrants show.

“The faith of the deportees and migrants is admirable. They’re able to laugh, enjoy and have a good time. It’s as if they forget or don’t see the gravity of their situations,” Sister Robles added. “They always say, ‘we trust in God’ or ‘God has a plan.’ I see them living life with joy, I admire them.”

PREVIOUS: Readings of the Holy Mass: Fourth Sunday of Advent

NEXT: How parishes can engage those Christmastime visitors