On sacred art: ‘Adoration of the Child’ 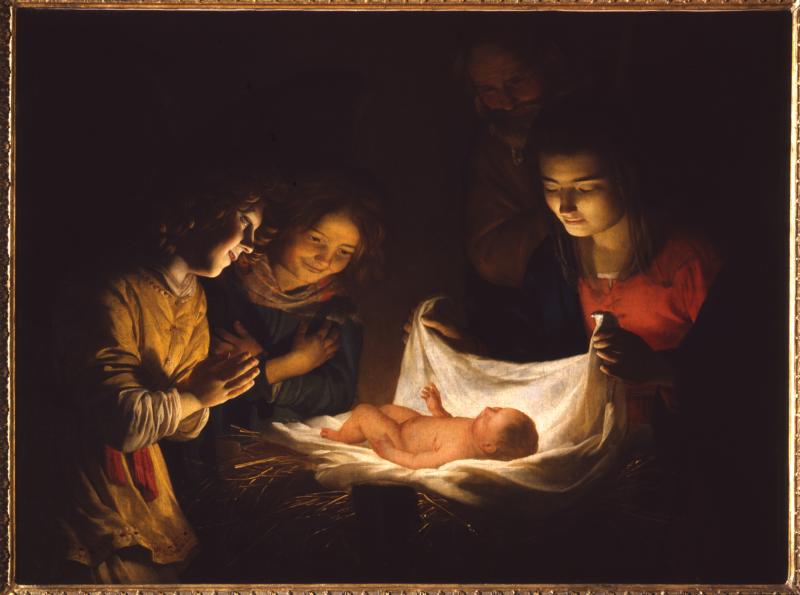 The scene is one you might share from your own memory. It is the image of a mother, father and two children delighting in the sweet innocence of an infant. You too may have stood before a child, inhaling the scent that only newborns hold or marveling at the tiny fingers that grasp onto yours.

In this scene, a closer look reveals an incredibly young mother, not much older than the children standing with her and yet, in her face, she holds calm confidence and wonder. The father appears at least twice as old as the mother, his eyes brimming with happy tears.

And the two children hold their hands in prayer or blessing as they look in awe upon the child. Our eye, like theirs, is drawn to the infant, radiant, as if he himself is the source of light … and of course, he is.

Dutch artist Gerrit Van Honthorst depicts this intimate scene in his painting, “Adoration of the Child.” Van Honthorst came to Italy in the beginning of the 17th century, to copy Caravaggio’s chiaroscuro technique, the effect of contrasting light and shadow in painting.

Van Honthorst took chiaroscuro to a more dramatic illumination called tenebrism, where some areas of the paintings are left in darkness, as opposed to shadow. This work would influence another Dutch painter, Rembrandt. Van Honthorst became so skilled at the technique, the Italians gave him a new name, “Gherardo delle Notti” or Gerard of the Night Scene.

In “Adoration of the Child,” light is reflected off the faces of those gazing at the Christ Child. The child is in fact, the source of light in the painting. The edges of the scene are nearly in darkness reminiscent of the Scripture in John’s Gospel: “The light shines in the darkness, and the darkness has not overcome it” (Jn 1:5).

In the edges, in those shadows, we see the outlines of wings behind the children and realize that they are angels. These same angels will share the good news with shepherds tending to their flocks nearby, singing “Glory to God in the highest and on earth peace to those on whom his favor rests” (Lk 2:14).

Even though Mary is young, she shows none of the anxiety common to new mothers. This is the same young woman who told the angel Gabriel nine months earlier, “I am the handmaid of the Lord. May it be done to me according to your word” (Lk 1:38).

The red of Mary’s clothing reminds us of her royalty as the mother of Christ. She will watch her son, treasuring every moment in her heart.

In Joseph’s face, there is a tenderness; this child is who he’d been waiting for. Joseph had been told in a dream of the child’s impending birth. Joseph will devote the next years of his life protecting his son as they escape Herod and hide in Egypt. But in this moment, his heart glows in love and he understands all the prophets spoke of for centuries.

Behind the joyful sweetness of this scene lay foreshadowing of the future to come. The white linen the Christ Child is swaddled in, foretells the cloth in which his body will be wrapped, when he is taken down from the cross. He is a child born to die.

And what if you place yourself in this scene, as you have stood before children before, but this time, the infant is Christ. Can you smell the hay? The donkey dung? Or does the rest of the room fade to the edges? Do you fall to your knees? Do you glimpse glory?

NEXT: A Christmas faith reflection of compassion and beauty