Marian feast not a holy day this year, but go to Mass anyway 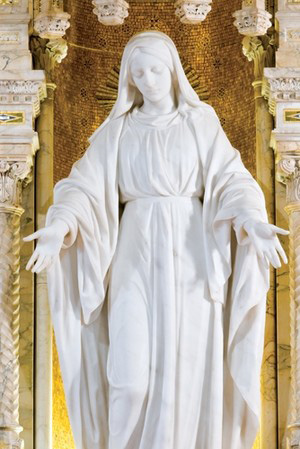 A major Marian feast is not a holy day of obligation this year, but the faithful are still invited to honor Mary by attending Mass.

The Solemnity of the Immaculate Conception, celebrated Dec. 8, falls this year on the Second Sunday of Advent. As a result, “the Advent observance takes precedence,” said Father Dennis Gill, director of the archdiocesan Office for Divine Worship and rector of the Cathedral Basilica of SS. Peter and Paul.

While the feast will be observed on Monday, Dec. 9, said Father Gill, “the holy day of obligation associated with (the feast) is not transferred.”

But just because you don’t have to go to Mass that day doesn’t mean you shouldn’t.

“I encourage you to participate in Mass on Dec. 9 and ask the heavenly aid of Mary, our mother, for our country,” said Father Gill.

The feast, which celebrates Mary’s conception without original sin, has a long and complex history, but remains more relevant than ever, said Pope Francis in his 2018 Angelus address on the solemnity.

Contrasting Adam’s rejection of God with Mary’s unconditional acceptance of the divine will, Pope Francis said that Mary models “the cure for selfishness” and “the antidote for a dissatisfied life” through an attitude that says, “Here I am.”

Such trust, said Pope Francis, “is the highest praise we can offer” God, and demonstrates a choice “to bet on the Lord” and remain “docile to his surprises.”

The grace by which Mary was preserved from sin and perfectly conformed to the divine will was drawn “in view of the merits of Jesus Christ,” wrote Pope Pius IX in his 1854 apostolic constitution Ineffabilis Deus, which formally declared the doctrine of the Immaculate Conception.

Throughout the centuries, theologians wrestled with the logic by which Mary could remain free of sin from her conception. Thirteenth century Franciscans William of Ware and Blessed John Duns Scotus were instrumental in resolving these difficulties, with Scotus affirming that “God could have conferred as much grace on (Mary) in the first moment of her soul’s existence as he does on another soul at … baptism.”

Almost a quarter century before Pope Pius IX’s declaration, St. Catherine Labouré, a French religious, witnessed several apparitions of Mary that affirmed the doctrine of the Immaculate Conception. These manifestations revealed the design of the Miraculous Medal, which includes the prayer, “O Mary, conceived without sin, pray for us who have recourse to thee.”