The Martyr of Denver?
Father speaks in Phila. of son who laid down his life for friends 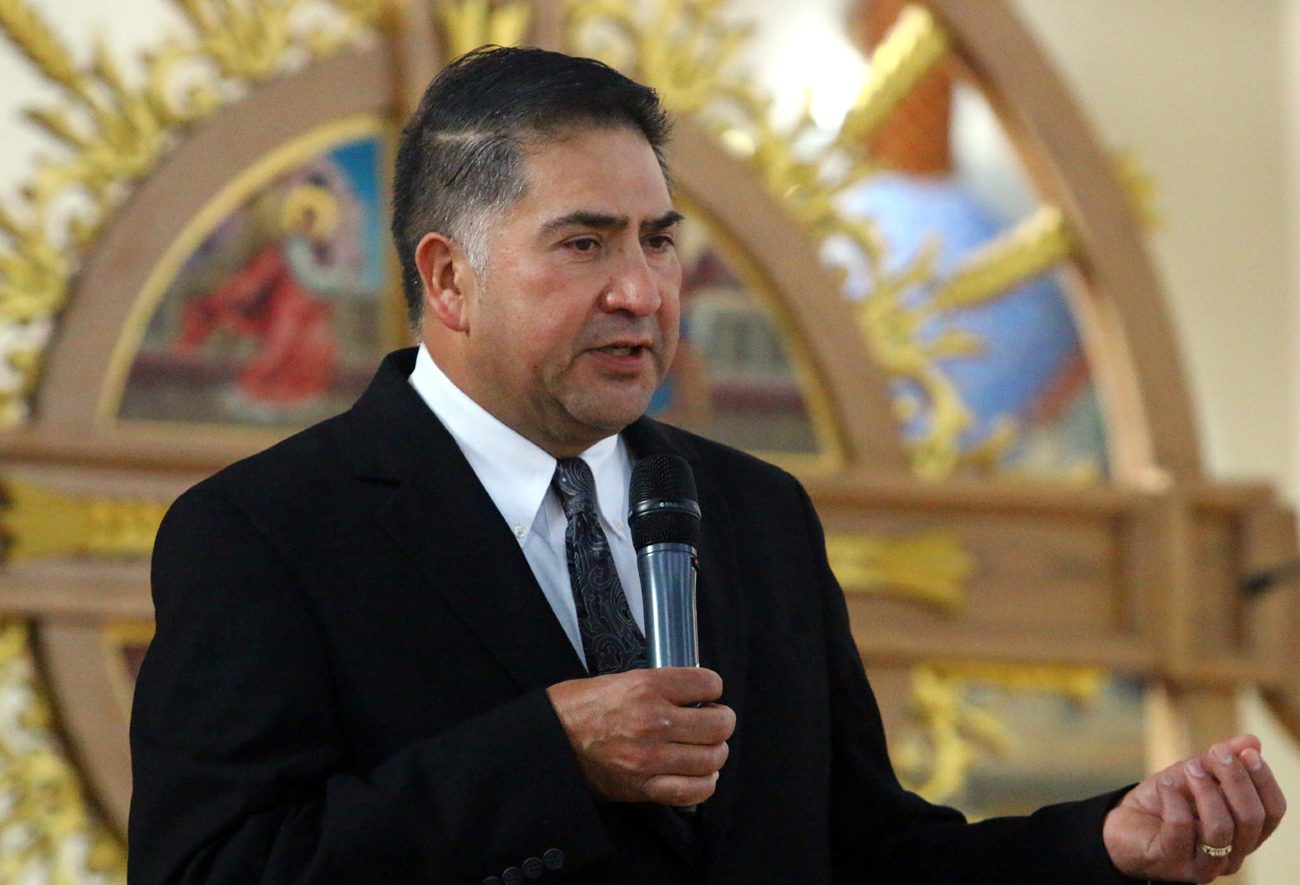 John Castillo shares the story of his son, Kendrick, Dec. 8 at the Ukrainian Catholic Cathedral of the Immaculate Conception in Philadelphia. The 18-year-old was killed last May while shielding his classmates from gunfire during a shooting rampage at their school in Denver. (Photo by Sarah Webb)

Does heroism equate with saintliness? Perhaps. “No one has greater love than this, to lay down one’s life for his friends,” Jesus tells us in John 15:13.

Last month at the fall meeting of the United States Conference of Bishops in Baltimore, Archbishop Borys Gudziak, the Metropolitan Archbishop of the Ukrainian Catholic Archeparchy of Philadelphia, suggested at this time of anti-immigrant sentiment there is a need to publicize saintly role models representing the varied ethnicities that make up these United States of America.

An immediate example he mentioned as a possible candidate for beatification was Kendrick Castillo.

Kendrick was an 18-year-old high school senior in Denver and just days away from graduation last May when he confronted an armed fellow student, also 18, who had stormed into his English classroom intent on massacre.

Although Kenrick was shot and died almost immediately, his quick intervention gave some of his classmates the opportunity to rush in and disarm the killer.

Actually there were two assailants acting together but in different classrooms that day, and while a number of students were injured, Kendrick was the only fatality. Both of the perpetrators are awaiting trial for murder. 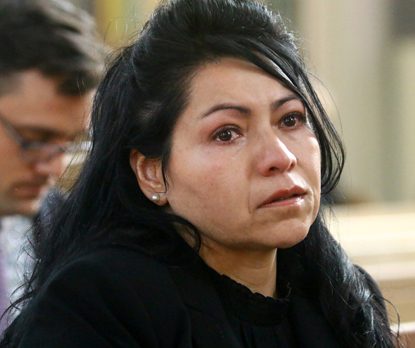 Maria Castillo is brought to tears as her husband, John shares the story of their son, Kendrick, at the Ukrainian Catholic Cathedral of the Immaculate Conception in Philadelphia. (Sarah Webb)

Archbishop Gudziak learned of his heroic act while attending the Knights of Columbus National Supreme Convention last August in Minneapolis. At this convention Kendrick’s parents, John and Maria Castillo, were present as their only child was posthumously enrolled by voice vote into membership of the Knights, an organization that he had expected to join shortly after his graduation.

John Castillo told the story of his son, how he was raised in the Catholic faith and attended Notre Dame Parish School, where he served on the altar and as a minister of hospitality. He went on to STEM School Highlands Ranch and was looking forward to college.

Kendrick was also planning to join his father’s K. of C. council, Southwest Denver Council 4844, where he often assisted at charitable events.

John and Maria Castillo were in Philadelphia Dec. 7-8 at the invitation of Archbishop Gudziak, as one of the events in the Ukrainian bishops’ sobor, or synod, last weekend. It precedes and prepares for the worldwide Byzantine Ukrainian Catholic sobor in August 2020 in Ukraine.

John gave a public testimony on his son at the Byzantine Ukrainian Catholic Cathedral of the Immaculate Conception. In an interview with CatholicPhilly.com, he said he was taken aback and pleased by the support given by Archbishop Gudziak. 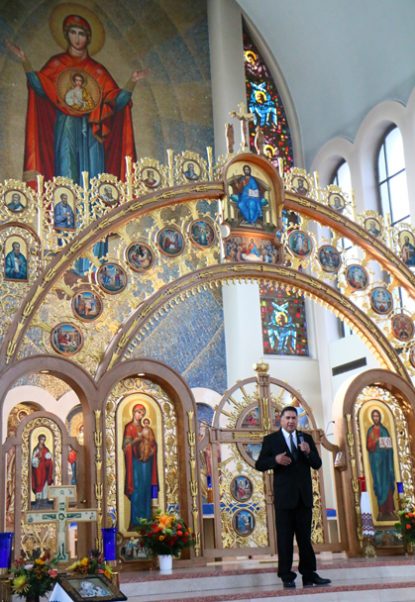 John Castillo, father of Kendrick Castillo who gave his life to save his classmates during a shooting at their school in May 2019 in Denver, addresses an audience Dec. 8 at the Byzantine Ukrainian Cathedral of the Immaculate Conception in Philadelphia. (Sarah Webb)

“Of course my wife and I brought him up in the Catholic faith, and our son attended Catholic school at our parish, Notre Dame, through eighth grade,” he said.

“Our community and the Knights and the fellow members of our church have been very strong. We have difficult days. I’m not telling you we don’t. We miss our son deeply and we still have a lot to deal with. There are the court cases for the two perpetrators that committed the murder. I pray a lot; I pray my rosary. When it comes to sacrifice, I believe in my heart he was the best tool to prevent further loss of life.”

As father and son, John and Kendrick were close. Just as Kendrick participated in his father’s Knight of Columbus events, John attended robotics programs with his son.

Once the topic of school shootings came up in conversation between them, and Kendrick declared if it happened in his school, he would try to stop it. His father advised him not to. Neither believed this remote possibility would really happen.

In his own sorrow, John Castillo has special sympathy for Maria, his wife.

“Our grief is very different,” he said. “In a mother’s role she put everything into her family. Her job was to make sure our needs were met, and she did it well. It was a different relationship and my heart breaks because I know her devastation is worse than my own. In our situation our faith helps us.

“We will be grieving in some way for the rest of our lives, but Kendrick’s sacrifice made it possible for other people to live, to survive that day. By the grace of God he was able to do what he did to save lives. Speaking for myself I cannot be mad at God for what happened.”

There are further ordeals ahead, including the trial of the two perpetrators who were dealing with problems of their own, including a father that left the family of elder of the two and gender identification issues for the younger.

But John Castillo points to more sinister issues – for example satanic symbols on the vehicle they used including the number 666 and a pentagram, plus social media postings with anti-Christian and anti-Semitic themes.

Considering that coming ordeal of a trial or trials, “I would want justice to be done,” Castillo said. “The punishment has to be serious because there has to be a way to make sure the perpetrators have time to reflect on their actions. There has to be justice and we must speak the truth in all matters.”

While he knows people talk about the matter of gun control, John Castillo doesn’t believe that solves the issue. It doesn’t have to be rifles or, as in this case, stolen handguns. People who wish to kill can use many different means including knives and arson among others, he noted.

“I think a strong moral compass is the number one thing,” he said. “When they raise children, even if people are divorced, they have to be there for them.

“In our community we need to raise our children as role models so that they don’t wander off into the dark. It is not enough to go to church, to receive communion and go to confession. We need to walk our faith. We can’t be followers in our society. We have to be strong enough for those who need help and that’s what Kendrick did.” 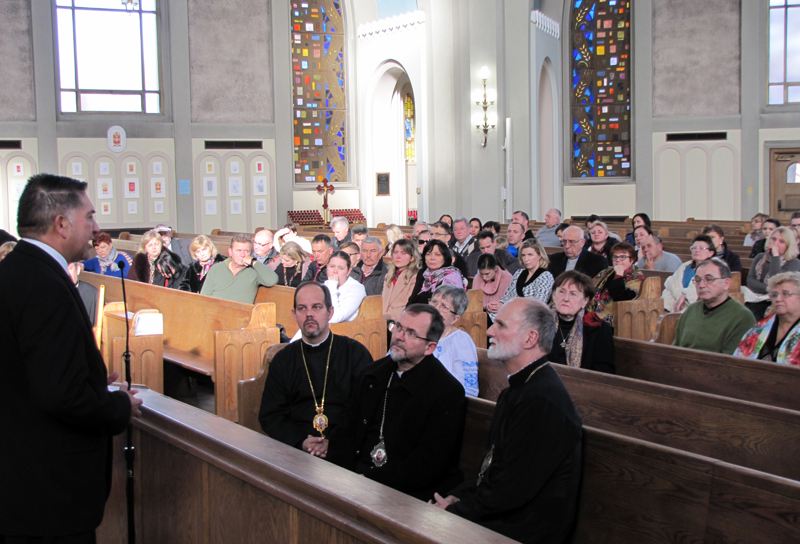 John Castillo speaks to a rapt audience Dec. 8 at the Ukrainian Catholic Cathedral of the Immaculate Conception in Philadelphia. Among those listening to his talk were prelates participating in the sobor, or diocesan synod, underway last weekend including (front row, from left) Bishop Bohdan Danylo, Eparch of St. Josaphat in Parma, Ohio; Bishop Bohdan Dzyurakh, secretary of the Ukrainian synod of bishops; and Metropolitan Archbishop Borys Gudziak, head of the Byzantine Ukrainian Archeparchy of Philadelphia. (Sarah Webb)