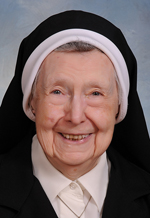 Sister Ann Joseph Hartman, O.S.F., 99 died Nov. 12 in Assisi House, Aston. She had been a professed member of the Sisters of St. Francis of Philadelphia for 78 years.

She was born Catherine Anna Hartman in Philadelphia, where she was a member of All Saints Parish and a graduate of West Catholic High School. She entered the congregation in 1939 and professed her first vows in 1941.

Sister Ann Joseph earned a B.S. in nursing from Villanova University and ministered primarily in health care and education.

In 1952, Sister Ann Joseph took on the position of nursing supervisor in the Archdiocese of Baltimore at St. Joseph Hospital in Baltimore where she continued to serve until 1977 and also served as a caregiver. She helped coordinate the move from the original hospital location to the new facility in Towson in 1965.

Sister Ann Joseph ministered for 43 years in the Diocese of Trenton and taught in the Archdiocese of Philadelphia at St. Alphonsus School, Philadelphia; St. Bernard School, Doylestown; and Resurrection School, Chester. She also taught at St. Francis Orphanage in Orwigsburg in the Diocese of Allentown.

In 2016 she moved to Assisi House, the congregation’s retirement residence in Aston where she served in prayer and hospitality ministry until her death.

The funeral Mass was celebrated Nov. 20 and burial followed in Our Lady of Angels Cemetery in Aston. Donations in Sister Ann Joseph’s name can be made to the Sisters of St. Francis Foundation, 609 S. Convent Road, Aston, PA 19014.