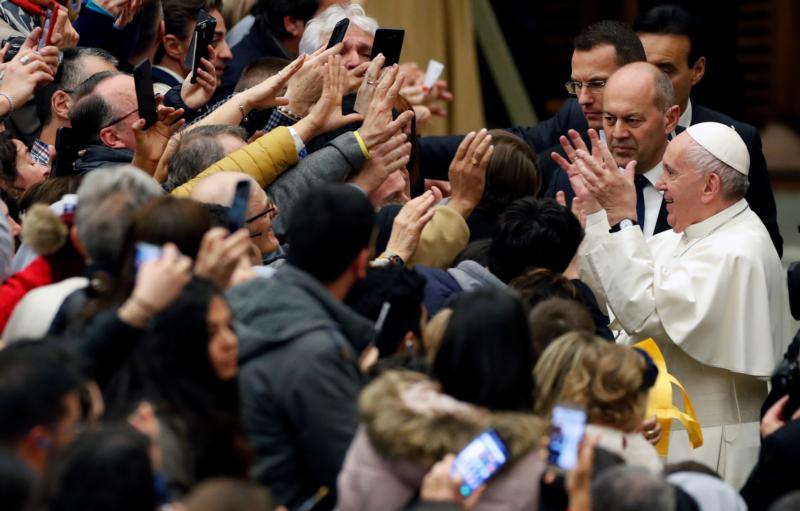 Pope Francis greets people as he arrives for his general audience in Paul VI hall at the Vatican Jan. 22, 2020. (CNS photo/Yara Nardi, Reuters)

VATICAN CITY (CNS) — Showing hospitality makes a person a better human being and a better Christian and is an important part of promoting Christian unity, Pope Francis said.

“Working together to live with ecumenical hospitality, particularly toward those whose lives are most vulnerable, will make us — all Christians, Protestants, Orthodox, Catholics, all Christians — better human beings, better disciples and a more united Christian people,” the pope said Jan. 22 during his weekly general audience.

Christians today, like the people of Malta who welcomed St. Paul and his companions who were shipwrecked on their island, must show hospitality to and care for those who flee violence and persecution, he said.

“Unfortunately, they sometimes encounter even the worst hostility,” he said. “They are exploited by criminal traffickers today; they are treated as numbers and as a threat by some leaders today; sometimes inhospitality rejects them as a wave carrying poverty or the very dangers from which they were fleeing.”

In his audience talk, the pope reflected on the Week of Prayer for Christian Unity, which takes place Jan. 18-25. The theme for the 2020 celebration, “They showed us unusual kindness,” is taken from St. Luke’s account in the Acts of the Apostles of the hospitality shown by the people of Malta to St. Paul and his companions.

St. Paul and the other passengers of the ship were welcomed by the Maltese people, who gave them food and shelter “even though they had not yet received the Good News of Christ,” the pope said.

The virtue of hospitality, he added, “means recognizing that other Christians are truly our brothers and sisters in Christ.”

The pope said ecumenical hospitality means showing God’s love to others and “a willingness to listen to other Christians, paying attention to their personal stories of faith and the history of their community.”

“I think about the past, in my land for example, when some Evangelical ministers came,” the pope said, “a small group of Catholics burned their tents. This isn’t Christian. We are brothers and sisters. We are all brothers and sisters and we must give hospitality to one another.”

With so many migrants and refugees facing “risky voyages to escape violence, war and poverty,” Pope Francis called on Christians to set aside their differences and work together to show them “the love of God revealed by Jesus Christ” and that “each person is precious to God.

“The divisions that still exist between us prevent us from being fully the sign of God’s love for the world, which is our vocation and mission,” he said.

PREVIOUS: Gift of understanding helps us to see as God does

NEXT: Were there ever women deacons in the church?