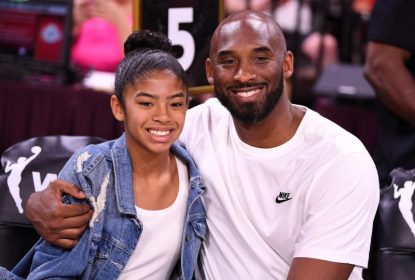 Retired NBA legend Kobe Bryant and his daughter Gianna, 13, were among nine people killed Jan. 26, 2020, in a helicopter crash in Calabasas, Calif. The two Catholics are pictured during a game in Las Vegas July 27, 2020. (CNS photo/Stephen R. Sylvanie-USA TODAY Sports via Reuters)

He knew from a young age he was destined to compete. His professional basketball player father gave him a love of the game. His determined mother gave him an iron will. His Catholic parents also gave him a faith he would never abandon, especially in his darkest hour, a faith he was intent to pass on to his four daughters.

The standard American media story on the death of Kobe Bryant has focused on his basketball glory, his incredible scoring prowess, his two-decade career with the storied Los Angeles Lakers. His five NBA championships and 81-point game are often cited. The charge against him of sexual assault is also constantly revived. All fair game on the life of a famous but very real man.

While hundreds of stories on his tragic death mention the fact that he was taking his beloved daughter Gigi to basketball practice in the doomed helicopter, these same stories often fail to mention that at 7 a.m. that fateful morning of Jan. 26 he wasn’t focused on basketball but was taking his daughter to early Catholic Mass, which he did on a very regular basis.

Regular parishioners, priests and bishops in Orange County Catholic circles and his home base of Newport Beach have all come forward to testify to the fact that Kobe was a very dedicated Catholic. Many have also noted that Kobe’s preference was to come in quietly, sit in the back, leave discreetly and all the while keep the focus on the sacred mystery of the Catholic Eucharist and never on himself. How many media outlets covered that when Kobe was alive let alone when he passed?

The American media loves to tear down not only religious institutions but strong men. They particularly love the demise of proud black men. The story of the black male athlete with many illegitimate children is told all the time. Far fewer are the stories about the many proud black men like Kobe and LeBron James who dedicate everything they have to raising right their sons and daughters.

The great outpouring of grief from so many basketball players and other athletes over Kobe’s death comes largely from a deep well of fellow fathers who know the tremendous struggle to raise and keep a family together and strong in a culture that often encourages family breakups and a historical context that often attacked and beat down strong black fathers.

Kobe did not let whatever personal sin he may have stop him from his most important role of fatherhood. When Kobe struggled most he never forgot the help from a Father greater than any on Earth.

The tear-down media always seems to trump the build-up media. In the #MeToo era this is particularly true. Sexual sins and abuse dominate the headlines whereas the faithful actions of good husbands and priests are rarely mentioned.

I do not play down the real sins of sexual assault and harassment. Yet I come from a religion that believes in forgiveness and redemption. Kobe embraced a Catholic Church that knows far too well that sexual sin is real yet so too is the grace of God to repent and build a new life and priesthood.

I am not famous or a good athlete. I am not a modern Lakers fan although I come from their original hometown of Minneapolis and wish their winning legacy would return to my woeful Minnesota Timberwolves. I am not a father to any children. I am not a black man or a celebrity.

I am, however, a Catholic who started last Sunday at morning Mass worshiping a greater power than my very sinful self. I do not often understand God’s mysterious ways but believe they ultimately work for good.

Before Kobe Bryant boarded that fateful helicopter he did not take his daughter to a fancy spa or expensive brunch. He took her to Mass with Jesus. I am proud to say that Kobe Bryant was my brother on the day he died.

Cain Pence is a Minneapolis-based writer and graduate of Georgetown University who has been published in numerous publications. He can be reached at caino@cainpence.com.

PREVIOUS: Life is priceless, but giving birth is pricey

NEXT: In a world going mad, Catholic schools are havens of sanity