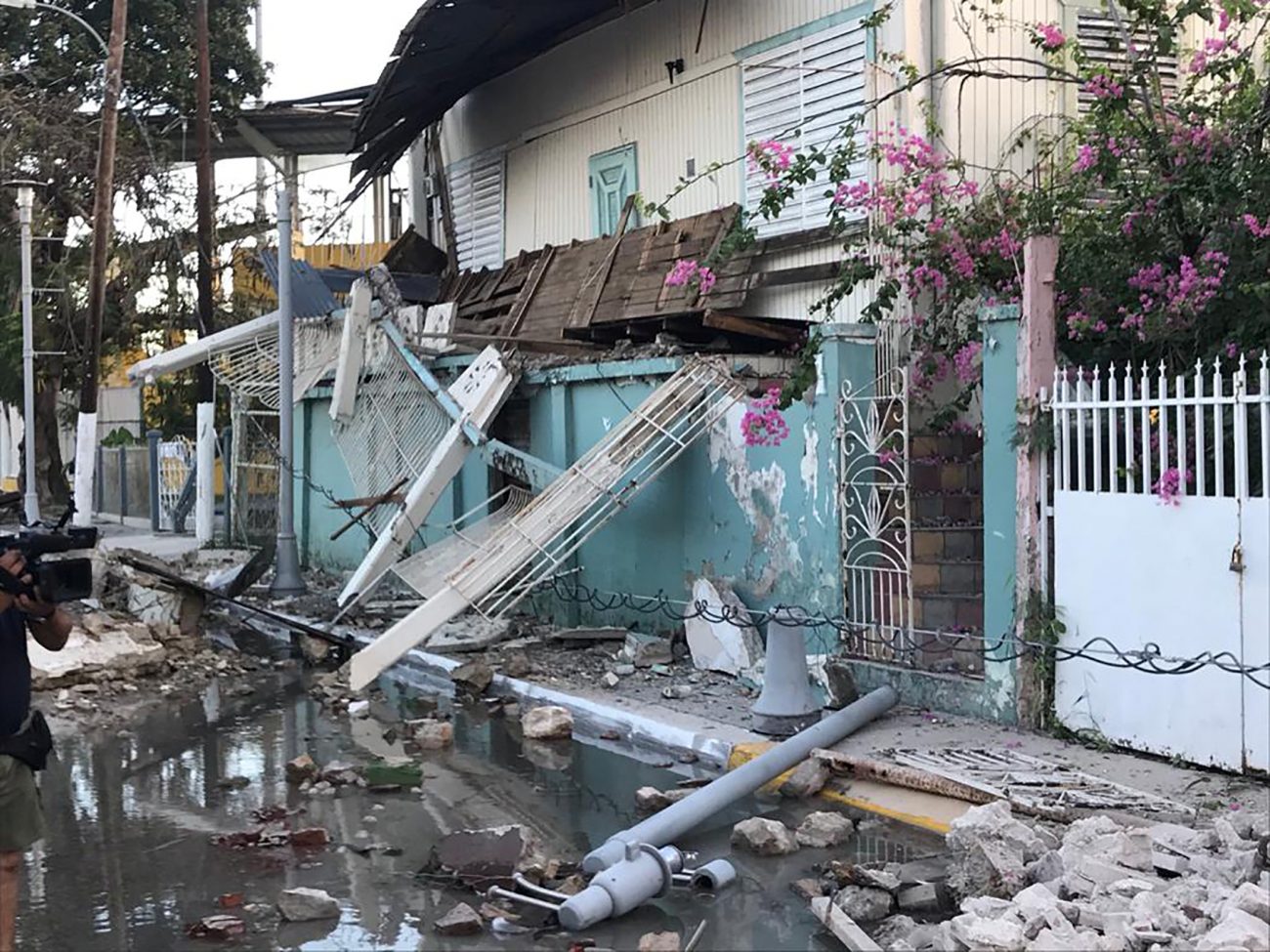 A destroyed home is seen after an earthquake in Guanica, Puerto Rico, Jan. 6, 2020. Archbishop Jose H. Gomez of Los Angeles, president of the U.S. Conference of Catholic Bishops, offered “my prayerful solidarity” to the people of Puerto Rico in a Jan. 7 statement, after a series of earthquakes killed at least one person and destroyed one Catholic church. (CNS photo/Ricardo Ortiz, Reuters)

Local faithful are calling for prayers as they receive updates from loved ones in Puerto Rico, which has been rocked by a series of more than 500 earthquakes that began on Dec. 28.

“Puerto Rico is suffering at this very moment,” said Julie Thillet, coordinator of religious education at St. William Parish in Philadelphia. “They are terrified, they are unsure of the future and they are desperate.” 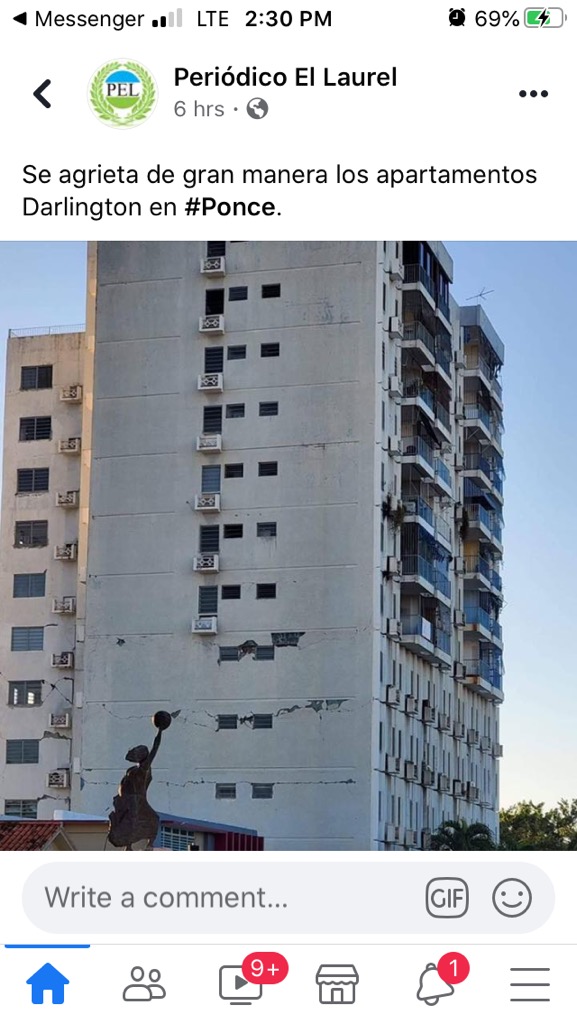 The Ponce Darlington apartment building in Ponce, Puerto Rico was severely damaged during a series of earthquakes that have shaken the island since Dec. 28. (Periódico El Laurel via Facebook / Courtesy of Julie Thillet)

The U.S Geological Survey (USGS) reported some 30 additional earthquakes occurring on the morning of Jan. 8, ranging in magnitude from 2.5 to 4.5.

According to Catholic News Service (CNS), at least one person has died. The Associated Press reported on Jan. 8 that nine persons have been injured, with more than 1,000 staying in government shelters, particularly in the island’s hard-hit southwest region. Some half a million are without power, and more than 250,000 are without water.

But for Puerto Ricans, such aid will only begin to address longstanding damage to the island, which is still recovering from the devastating effects of 2017’s Hurricane Maria.

“My niece told me, ‘This is worse than Hurricane Maria,’” said Thillet, whose family is from the southern cities of Ponce and Salinas, both particularly affected by the recent quakes and the deadly 2017 storm.

Thillet added that many in Guanica, near Ponce, “slept outdoors last night, [since they were] too scared to sleep in their own beds.” The town was near the epicenter of the 6.4 quake on Jan. 7, which has been followed by numerous smaller shocks.

Thillet’s sister-in-law, liturgical composer and recording artist Damaris Thillet, was in Puerto Rico during the past week and experienced the quakes firsthand. The musician, who directs the archdiocesan Coro Hispano, was not injured.

Another local liturgical music composer, Giovanni Morales, said that a close family friend and her fellow women religious were “having a difficult go at it in Guanica.” 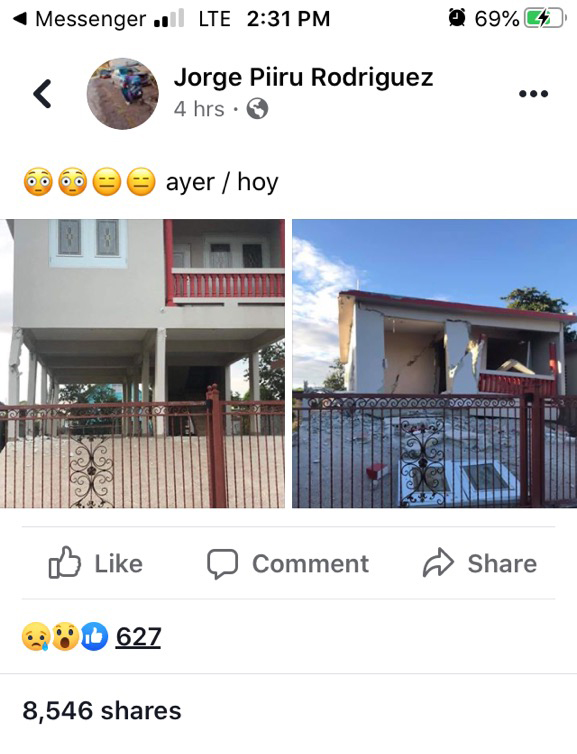 Side-by-side images show a home in Puerto Rico on Jan. 6 (left) and on Jan. 7, after the island was struck by a magnitude 6.4 earthquake, one of several temblors that have hit Puerto Rico since Dec. 28 (Jorge Piiru Rodriguez via Facebook / Courtesy of Julie Thillet).

Morales, who works with several choirs throughout the Archdiocese, said that Dominican Sister (“Sor”) Alba Bonilla and her fellow Hermanas de Fatima (Sisters of Fatima) “can’t even get into the motherhouse because of the earthquake.”

The women were unharmed, but Catholic Extension – a Chicago-based nonprofit that assists mission dioceses throughout the U.S. – reported on its website Jan. 7 that “the women are frightened” and “especially worried for the vulnerable elderly sisters,” for whom they are requesting prayers.

Vanessa Ortiz, a parent educator for archdiocesan Catholic Social Services (CSS), has been keeping in touch with family members in the southwestern town of Lajas, where she’s been told “tremors come and go.”

Ortiz, who is based at CSS’s Casa del Carmen family service center in Philadelphia, said she is “sad and anxious” while monitoring the situation from this area.

She said her family has advised that donating food, medicine and clothing will be the most effective ways to help earthquake victims, and that her relatives — who are sheltering in place — are “praying all the time.”

Faith is central to a coordinated response to the disasters, said Thillet and Morales.

“Now more than ever must we unite in prayer as one community in Christ,” said Morales. “We may not all be Puerto Rican but we are all brothers and sisters in Christ.”

“I have faith that we will make it through this latest challenge,” said Thillet. “Prayers move mountains.”