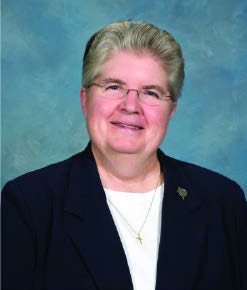 The Catholic Coalition for Immigrants and Refugees will present Sister of St. Joseph Carol Zinn as the featured speaker at its quarterly meeting on Jan. 11 at 10 a.m. in the Archdiocesan Pastoral Center, located at 222 North 17th Street in Philadelphia.

The topic will focus on “Promoting a Church and a World for All.”

Sister Carol currently serves as the Executive Director of the Leadership Conference of Women Religious (LCWR), a position she has held since July 2018. She was a member of the conference board from 2009 to 2015, and then served as senior vice president for mission integration at Plante Moran, working with religious congregations as they discerned and planned for their mission into the future.

Sister Carol has been involved with global justice and peace efforts for many years, having served as the representative of the Congregations of St. Joseph at the United Nations from  2001 to 2009, and education director for Global Education Associates from 1996-2001. Her focus has been on energizing local grassroots initiatives around issues of global concern, such as human rights, poverty, violence and the forced migration of peoples due to these social problems.

She has also served as a teacher on the elementary, secondary, college, and post-graduate levels, in educational leadership in elementary and secondary schools, and in religious education and music ministry in various parish and diocesan venues.

Sister Carol holds a Bachelor of Science degree in education from Chestnut Hill College, a Master of Arts degree in theology from Saint Bonaventure University, and a doctorate in education foundations and curriculum development from the University of North Carolina. In 1993, she was a research fellow in Leadership and Transformation at Harvard University.

The Jan. 11 meeting, which is open to all interested individuals, will begin with a “Welcoming Post Card Party” followed by an opening prayer. After Sister Carol’s talk, participants will have time to share with each other what has been happening in the parishes, congregations and organizations represented by those attending.