At Villanova U, Vatican expert on abuse crisis speaks of trauma, progress 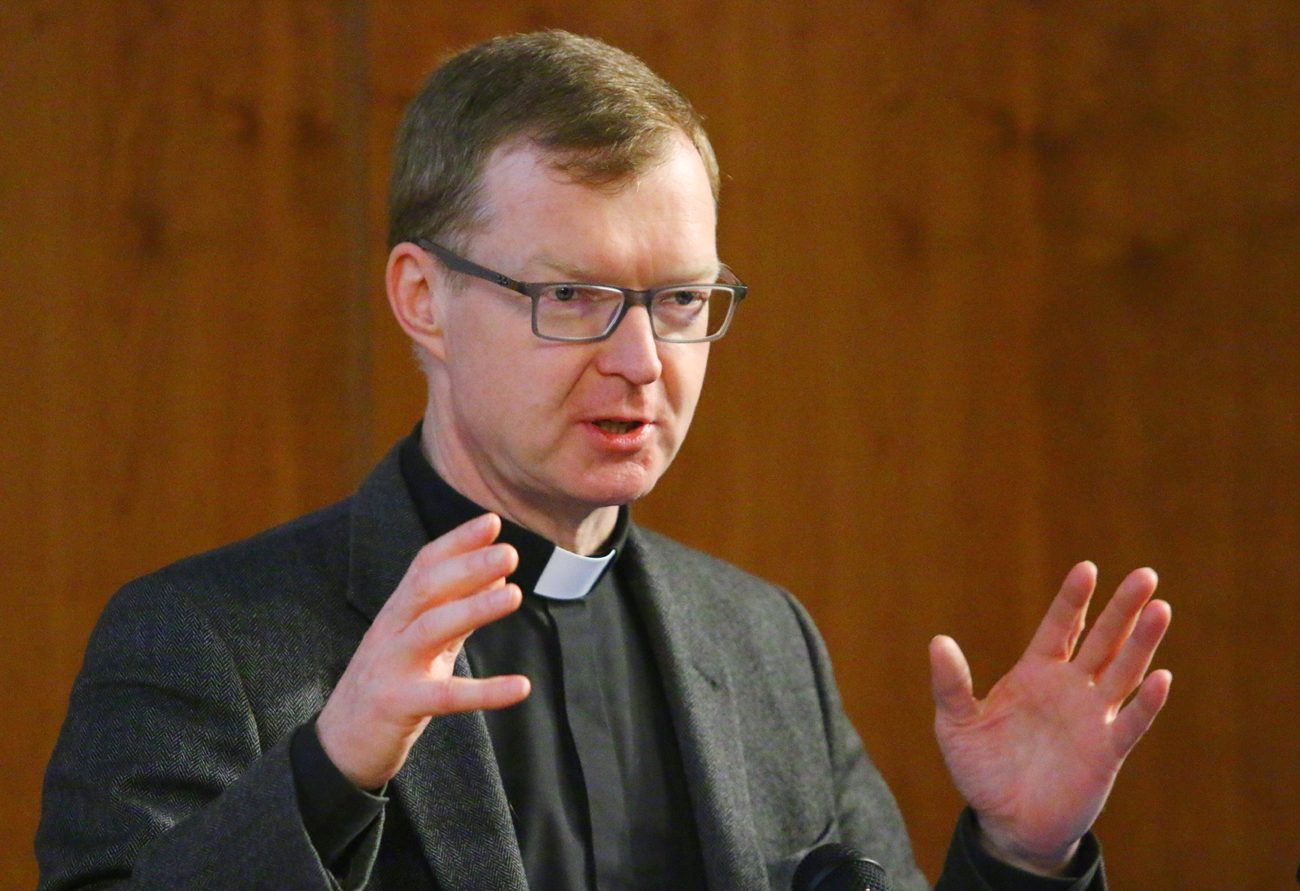 Almost 200 people filled the Driscoll Hall Auditorium on Villanova University’s campus on Thursday evening, Jan. 29 looking to deepen their understanding about global perspectives on the sexual abuse crisis in the Catholic Church.

It was the third conference in the four-part series of discussions with Catholic theologians hosted by Villanova to examine the abuse crisis. It featured Father Hans Zollner, S.J., a licensed German psychologist and psychotherapist with a doctorate in theology and one of the church’s leading experts in the area of safeguarding minors.

“Father Zollner is committed to providing a safe environment for children,” said Kerry Robinson in her introduction. Robinson is the global ambassador for Leadership Roundtable, an organization of laity, religious, and clergy working together to promote best practices and management accountability in the U.S. Catholic Church. 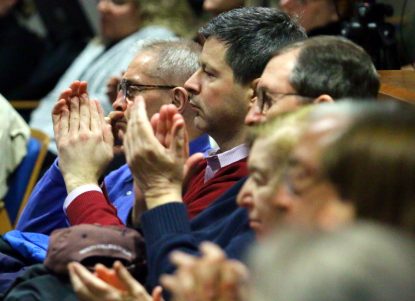 Participants at the Jan. 29 global perspective on the clergy sexual abuse crisis by Father Hans Zollner, S.J., applaud what they heard at the Villanova University conference. (Sarah Webb)

The crisis is one of “institutional traumatization” in which wrongdoings have been perpetrated by an institution upon individuals dependent on that institution, according to Father Zollner, who said “steps forward” to address it globally are being made in Rome.

It’s been about 35 years since awareness of the sexual abuse crisis in North America has arisen, and he noted other events around the world such as in Germany where “the Jesuit director of a school in Berlin broke ranks and spoke about abuse at his school,” a reference to Canisius-Kolleg Berlin, a Catholic university-preparatory school in Berlin, Germany.

Pope Francis “created huge uproar and criticism” in 2018 regarding Father Fernando Karadima, Chile’s most notorious clerical abuser, when the pontiff said he “needed proof” of the allegations against the priest. The pope later read the report on the priest and apologized for his statement. As a result of the crisis there, 34 Chilean bishops offered their resignations to the pope.

The situation in Chile was a “turning point on how we look at the abuse crisis at this point in history,” Father Zollner said, adding this “underlined the systematic failure in dealing with the abuse. The church system is put on the spot.” 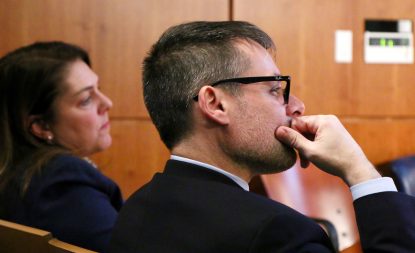 Kerry Alys Robinson (left), global ambassador of the Leadership Roundtable in the United States, and Massimo Faggioli, professor of theology and religious studies at Villanova University, listen intently to the talk by Jesuit Father Hans Zollner Jan. 29 at the university. (Sarah Webb)

There’s also been “increasing focus on the abuse of adults due to (former Cardinal Theodore) McCarrick,” said Father Zollner, who cited the abuse of religious women in the church.

“Twenty years ago, nobody cared,” he said. “The untouchables” – senior leadership in the church around the world – “have become the target of criticism. The level of trust is below zero, and this is devastating for an institution based on trust and faith.”

He described the crisis as marked by similarities regardless of country or continent, including the presence of clericalism, in which clergy are shown excessive deference and a presumption of moral superiority. It as an attitude of being “above the law” and “no one can tell me what to do; I can take whatever I want,” Father Zollner said.

Another global similarity is the “neglect, denial and rejection of survivors” who feel great discomfort and fear. All of the church must remember that the majority of victims “are still members of the church whether they go to church or not,” he said. “There are members of this church who hurt.”

Although the Vatican has universal oversight of the Catholic Church it is woefully understaffed to respond to cases of clergy sexual abuse, with only a staff of about 18 people who “don’t have the infrastructure or the training to deal with the reported incidents that have come in,” Father Zollner said.

Still, he pointed to great progress being made at the Vatican, with a meeting for the protection of minors held in February 2019, which stressed a systematic approach of responsibility, accountability and transparency, both internal and external.

The meeting, according to Father Zollner, has brought about changes of attitude regarding canon law, accountability among bishops and everyone’s duty to report sexual and other types of abuse in the church. “Many more changes have been made than I had anticipated,” he said. “The top has understood the message, and there is movement forward.”

Catholic theology can also provide a way forward through the abuse crisis, according to Father Zollner. “What does God, the Lord of the church and of history, call us to through the scandals and crises of this time?” the priest asked, adding there is an opportunity now to ask who we want to be as a church.

“We believe in Jesus who made himself vulnerable,” said Father Zollner, “exposing himself to death. He shows the wounds of crucifixion even after rising. We forget where we come from — we come from the cross. Original sin makes us forget about our roots.”

Reflecting on the talk, attendee Heidi Scheer of Villanova said “some of the things are very shocking. Why did it take so long to respond? But it’s good Pope Francis responded. It’s not an easy task he has.”

Jennifer Gallagher of Media said she attended the conference because “I’m in my 30s and recently married. I want to make sure the church is safe and has its checks and balances to keep the church safe. It’s really important to me and my faith.”

The fourth and last conference in the Villanova series will be Saturday, March 21 from 9 a.m. to 5 p.m. at Villanova’s Charles Widger School of Law. The day-long, multi-session seminar will conclude with a 5 p.m. Mass dedicated to the victims of sexual abuse in the church. 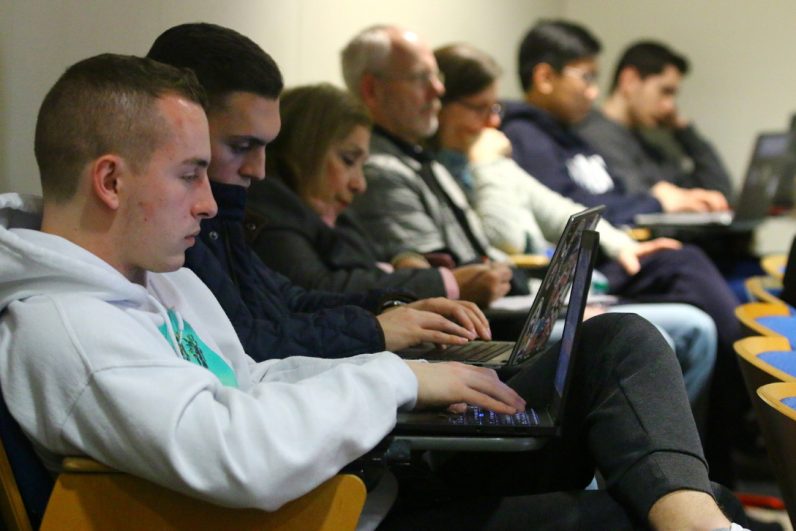 Joseph Buckshaw, a senior at Villanova University, was among the many students, lay persons and religious who attended the “Global Perspectives on Sex Abuse Crisis” presented Jan. 29 at the university by Father Hans Zollner, S.J. (Sarah Webb)

PREVIOUS: A tale of decline? Not so at St. Charles Seminary