Maryland seminarians talk up faith at West Chester U. 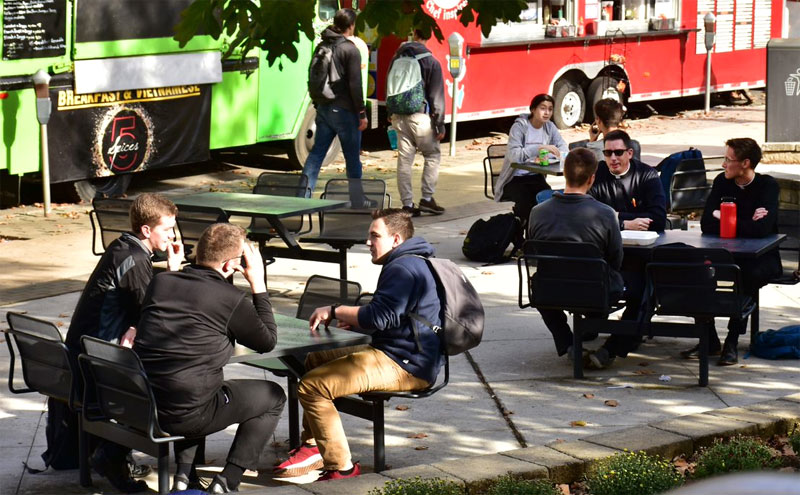 Seminarians from Mount St. Mary's Seminary in Maryland visit the campus of West Chester university to speak with any students who want to chat about faith, during an evangelization project last October.

West Chester University had an interesting visitation this past October extending from a Sunday afternoon through Tuesday evening. Pairs of polite young men were approaching students in the quad to discuss, of all things, religion.

Were they Mormons or Evangelicals or perhaps Jehovah’s Witnesses? None of the above.

They were part of a volunteer visitation program conducted by a large group of seminarians from Mount St. Mary’s Seminary in Emmitsburg, Maryland, the nation’s oldest Catholic seminary. It has been doing this for years, not just in Maryland but many surrounding states, all with permission from the local college and Catholic campus ministry.

College years can be a critical period of spiritual formation for young people, but all too often the opposite is true. For many young men and women the last time they attend church services is the week before they leave for college, while still under parental oversight.

This is true no matter what denomination, and it doesn’t matter of it’s a public, private or most church-related colleges. Finding new friends or the closest party is much more a priority.

The challenge is re-evangelizing them or introducing them to God if he was not previously in their life. There many ways to do this, and one size does not fit all.

This venture in West Chester was to be peer, or near-peer, dialogue.

“Their visit was a shot in the arm for our ministry,” said Father Thomas Gardner, an archdiocesan priest and the Catholic Newman Center’s director at the 17,000-student West Chester University. “It definitely helped with opening a conversation with the students, getting them to think about their faith.

“It gave the students who are active in the faith a boost in confidence to speak to their fellow students about it. The main purpose was to talk about the faith to students, to bring the church to the secular world.”

As part of the visit, a large pavilion was erected on the quad where the Blessed Sacrament was reserved and benediction was celebrated. This too was an opening for conversation as students born into the faith explained the significance of the Eucharist to fellow students.

“We brought 26 seminarians,” said Michel Amman, the student coordinator for the visiting seminarians, who is himself from Fort Wayne, Indiana in his third year of theology, studying for the Diocese of South Bend.

“It started in 2011 and we do this to spread the Gospel,” he explained. “College and be a rocky road and many people do lose their faith. We found this not just with Catholics but with Protestants and other faiths.

“It’s an easy format,” he said of the visit. “Many people are just sitting around the quad. If they don’t want to talk to you, you just move away. But most are willing to talk.”

Generating religious vocations is not the purpose of the campus evangelization visits but there have been a couple of men who decided for the priesthood through the experience, Amman said.

Although the visiting seminarians were a key ingredient the effort also involved many others, including students from the Newman Center and other Catholic young adult groups including FOCUS (Fellowship of Catholic University Students).

While the seminarians are visiting, the various groups pitch in through hospitality, perhaps finding places for the visitors to sleep or donating extra meals from their college meal plan. It’s really a time for the entire Catholic community to come together to make it a successful visit.

One of the groups that answered the call from Father Gardner for help with the St. Mary Seminary visit to West Chester University was the members of Msgr. Henry Schuyler Council Knights of Columbus, centered at nearby St. Agnes Parish, West Chester.

The K. of C. Council has worked with the Newman Club in the past, not so much as to attract new young members but to provide service to the church, according to Past Grand Knight Gary Novinskie. “We are there to help,” he said.

In this case, Father Gardner asked if the knights could provide breakfast for the two mornings the seminarians were present, which they gladly did, complete with cooking and cleaning up.

In the past, Schuyler Council has done power washing and painting for the Newman Club, among other projects.

“We say, ‘You have a need, we will try to fulfill it,” Novinskie said.

Other outreach projects of the council include working ecumenically with the local Quaker community on charitable works and especially working with the Immaculate Heart Sisters at Camilla Hall on a range-painting project.

“They could not afford to have it done otherwise,” Novinskie said.

He admits he was skeptical as to what difference this large group of seminarians coming to the campus could make.

“By the time the initial shock wore off, you could see the results,” he said. “For the students, it was not just sitting in a church listening to a pastor who may be 70 years old.

“I think the students got to see what seminarians are really like, they are human beings too. I saw in the quad six or seven seminarians surrounded by kids who had a lot of questions, and they answered them. The outreach was beneficial to them.”

The visit of the Maryland seminarians was a three-day event. But just as important is the continued presence of Msgr. Henry Schuyler Council in their area, just continuing to what they have been doing for a century or so — answering the needs of their Catholic community.

The seminarians from Mount St. Mary’s Seminary in Emmitsburg, Maryland pose for a photo during their three-day visit to West Chester University.

NEXT: Composer, pianist gives ‘100% credit to God’ for her gifts