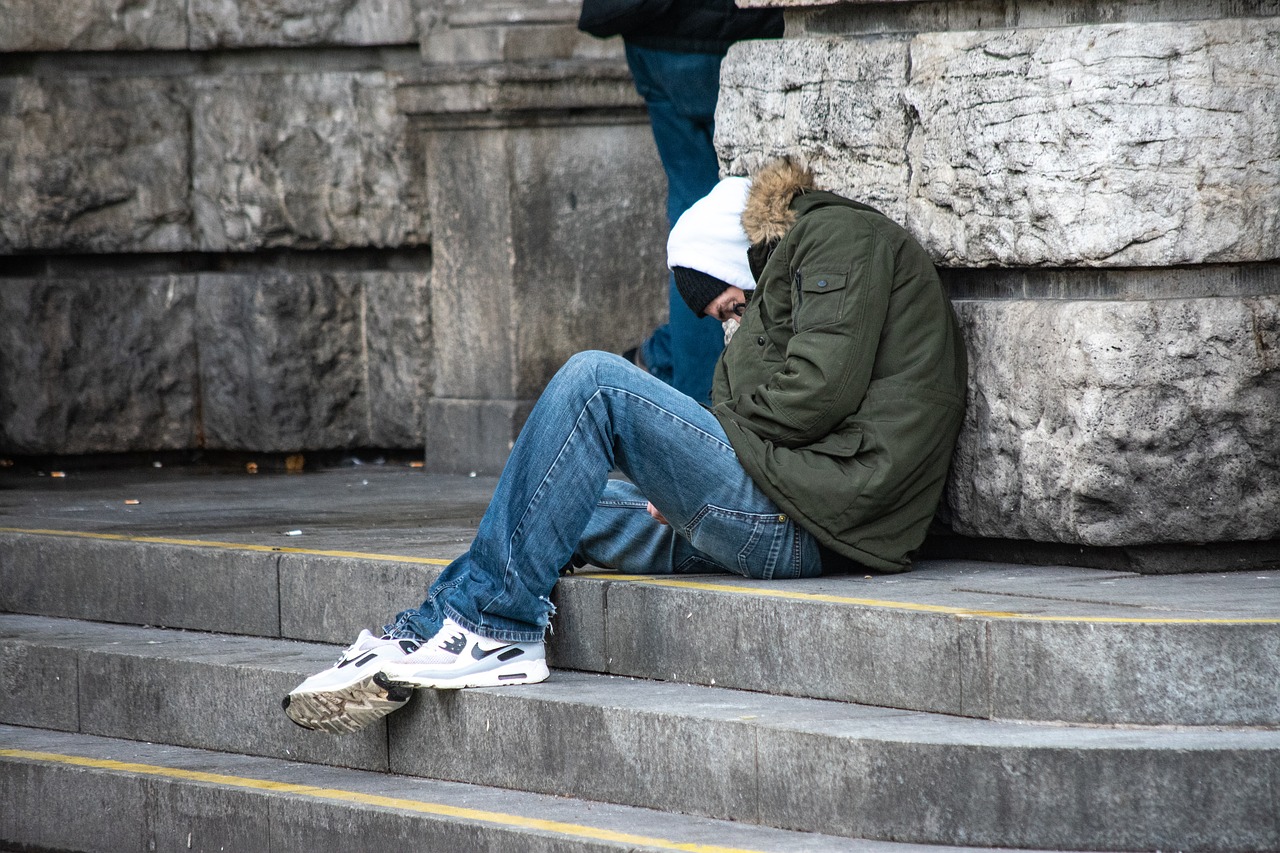 As the city cleared a tent encampment at 18th and Vine Streets earlier this week, several archdiocesan outreach workers reflected that there are no easy answers to addressing homelessness.

“It is a very complex and complicated issue,” said Amy Stoner, who directs community-based and housing and homeless services for archdiocesan Catholic Social Services (CSS).

On Jan. 6, staff from Philadelphia’s Department of Parks and Recreation removed 18 tents from a strip of park land along Vine between 17th and 18th Streets, within sight of the Cathedral Basilica of SS. Peter and Paul. The enclave had formed approximately two years ago, populated by a wide range of residents who stayed for varying lengths of time.

Many had already left ahead of the scheduled clearance; a remaining eight individuals were asked to vacate the site on Monday, which also saw two additional camps (one near Fifth and Wood Streets, another at 16th and Wood) closed by the city.

Over the previous months, CSS staff had engaged several of the Vine Street encampment residents, keeping in mind that “there is no one-size-fits-all solution,” said Renee Hudson-Small, assistant director of CSS’s housing and homeless services.

“Every person arrived at this point through a different avenue,” said Hudson-Small.

At the same time, “certain general themes” emerge in the backstories of those who end up homeless, said David Stier, director of St. John’s Hospice, a CSS emergency shelter and residence for men in Center City. The hospice provides close to 50,000 meals each year, along with case management, medical assistance, counseling, mailroom services, showers and a coffee house. 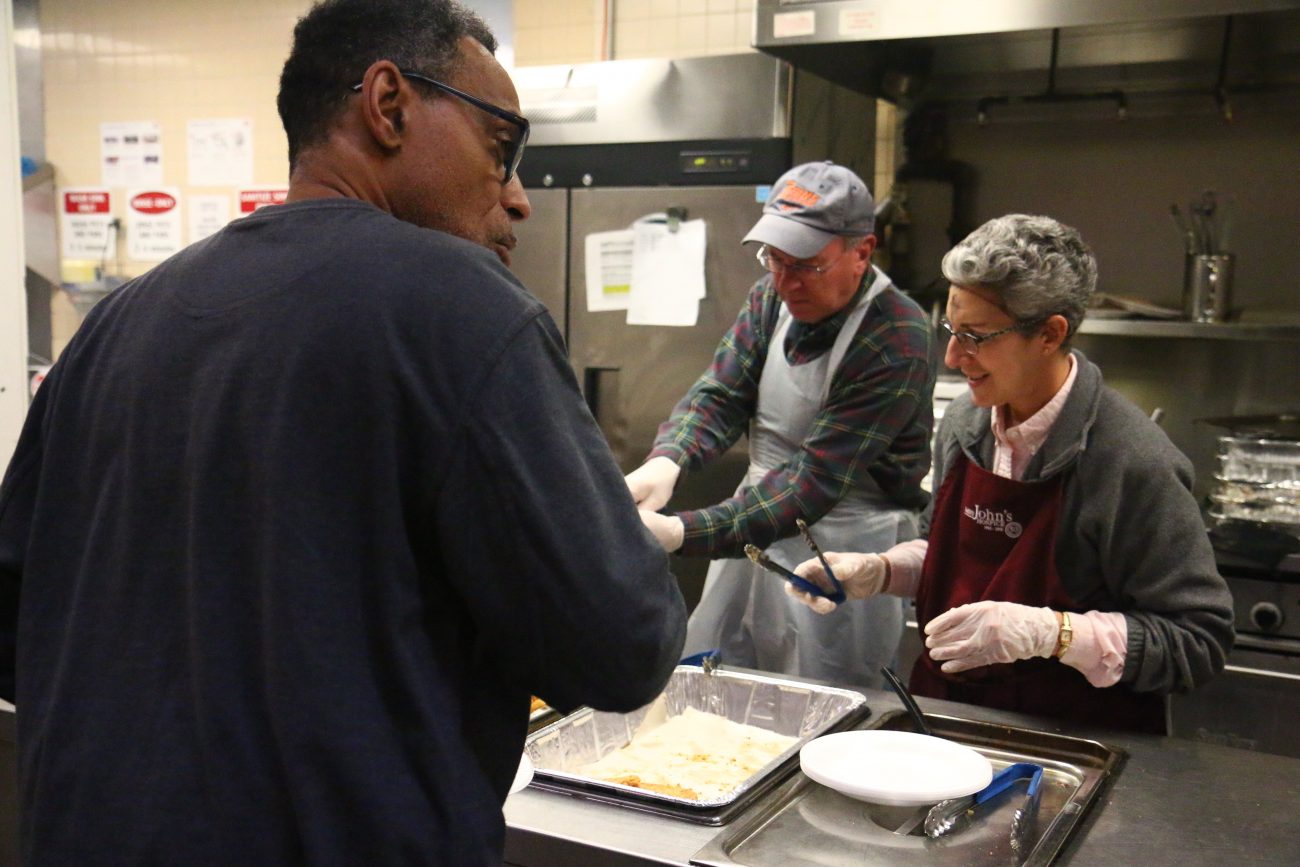 A client of St. John’s Hospice in Philadelphia receives lunch served by volunteers in this Feb. 14, 2018 file photo. The hospice is one of nine homeless outreaches operated by archdiocesan Catholic Social Services. (Sarah Webb)

CSS staff advised that to the best of their knowledge, none of those moved from the recently closed encampments have so far accessed the outreaches. However, as a 2018 federal study noted, many individuals experiencing homelessness “often strive to keep off the public radar,” making data collection and research on the issue difficult.

Many of CSS’s homeless outreach programs provide resources for mental health issues and addiction, both of which often lead to the loss of secure housing, said Stier.

In other cases, individuals “who don’t have healthy boundaries” can become homeless after being financially victimized by scammers or even by loved ones, he added.

Unemployment and shifts in the labor market are also factors, he said. Lack of affordable housing compounds the problem.

In addition, youth who age out of the foster care system are increasingly finding themselves on the streets.

“We’re seeing an uptick in people coming to us out of foster care,” said Steven Walenta, a social services supervisor at St. John’s Hospice. “Twenty years ago, the average age of our clients was about 35. Now we have a 19-year-old and at least five or six individuals under age 30.”

Social worker Rosemary Chetalo sees a similar pattern. As director of CSS’s Philadelphia-based Women of Hope program, which specifically provides a safe haven for young women, Chetalo is used to serving clients under age 30. Nowadays, though, most of them arrive after years in foster care, with no other options.

“They’ve burned their bridges with family and friends, and they can’t go back,” said Chetalo, adding that youth homelessness is often masked by “couch surfing,” or staying temporarily with various friends and family members.

Chetalo said that many of her clients suffer from the effects of sexual violence, which impairs their ability to live independently.

“A lot have been raped, and they’re dealing with that,” she said. “We’ve also had some who have been trafficked, even by family members.”

Trauma, depression and ADHD (attention deficit hyperactivity disorder) also inhibit clients’ ability to maintain a stable living situation, Chetalo said. Many of the women she encounters “don’t have basic life skills, and even personal hygiene can be an issue for them.”

Ultimately, an intricate mixture of social factors and individual choices lead to homelessness – and to its resolution, said Hudson-Small.

“Just as we all deal with life challenges in different ways, at different paces and for different reasons, so do those experiencing homelessness,” she said.

As a result, not every offer of help is accepted, since individuals “may not be ready to ask for assistance, or they may not trust,” said Hudson-Small.

Nevertheless, she and her colleagues continue “to offer services and respect (such) decisions,” she said, stressing that her team’s primary goal is “to be compassionate and provide dignity without judgment.”

PREVIOUS: Local faithful with loved ones in Puerto Rico call for prayers

NEXT: Immigrants to US face stiffer headwinds in 2020