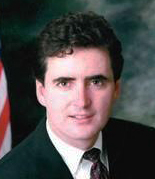 Although a committed Republican, he was noted for his ability to work across the aisle for the common good, something that is increasingly rare at this time.

A long-time resident of Levittown and Queen of the Universe Parish where he and his wife, Kathleen raised their six children, he was born into a family of eight children of James and Mary Margaret (Williams) Fitzpatrick.

Fitzpatrick was an Eagle Scout and a graduate of Bishop Egan High School. He received his undergraduate degree from St. Thomas University in Florida and his law degree from Dickinson School of Law at Penn State University. He also received an honorary degree from Holy Family University in 2018.

“A faithful practicing Catholic man, he was a tremendous crusader for life from conception to natural death,” said his pastor, Father John Wackerman. “A very humble man, hardworking, very giving; a great family man (and) a true home-town boy. He never forgot where he came from.”

He entered the political arena in 1995 first as a Bucks County commissioner, an office he held for a decade.

Joseph DiGirolamo, the mayor of Bensalem Township, well remembers Mike Fitzpatrick all the way back to those early days in his career.

“He served the commonwealth and county with great integrity, competence and dignity,” DiGirolamo said.

In 2004 Fitzpatrick was elected to the U.S. House of Representatives where he served one term before losing his seat to Patrick Murphy. Four years later he bounced back and defeated Murphy, and despite having cancer in remission, held the seat from 2011 to 2017.

An advocate of congressional term limits, Fitzpatrick chose not to run for office again and joined the law firm of Obermeyer, Rebman, Maxwell, Hippell in 2017. He was succeeded in his seat by his brother Brian, who is still in Congress.

“My heart is broken,” Brian Fitzpatrick said. “My big brother Mike was my hero and my best friend. Ever since I was little, I wanted to live up to him. His 12-year battle with cancer has taught our entire family the value of perseverance in the face of overwhelming odds. He has forever touched the lives of so many in our country.”

As a layman, Dominican Father Thomas More Garrett worked in the office of Congressman Mike Fitzpatrick. “I can think of no better example of public service,” the priest said of his former boss. “He wasn’t guided by ambition. It was all for the people he served. He influenced me in my decision to enter religious life.”

It has become almost a general rule in American politics that if you are running for office as a Democrat, you have to say you are pro-choice on the abortion issue; and if a Republican one must declare pro-life.

In Mike Fitzpatrick’s case, it wasn’t a matter of political expediency; he was pro-life, period. For him it was in his DNA.

“He was a fixture in the movement,” said Patrick Stanton, a long-time board member of the Pro-Life Union of Greater Philadelphia.

“He came to the March for Life and (to) our dinners,” he said. “He and his dad were pro-lifers and he never failed to support the movement. There is nothing negative that could be said about him.”

Pennsylvania Sen. Patrick Toomey seconded that. “I knew him from the time he was a county commissioner,” he said. “He served with great integrity, and proved time and again that it is possible to work across the aisle to make progress while remaining true to one’s principles.”

There will be viewing for Mike Fitzpatrick at Queen of the Universe Church, Levittown, on Thursday, Jan. 9 from 4 p.m. until 9 p.m.; also on Friday, Jan. 10 from 10 a.m. until noon, followed by his funeral Mass.

Father Thomas More Garrett, O.P., will be the principal celebrant and homilist; Father John Wackerman will be among the concelebrants.

In addition to his wife Kathleen, Mike Fitzpatrick is survived by his daughters Katie Chapman (John), Maggie Ayling (Jack) and Molly; sons Michael James and Thomas; grandson Jack Chapman and granddaughter Abby Chapman. Also his brothers and sisters and many nieces and nephews.

Interment will be private.