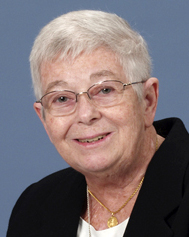 Sister Joan Christine Tobin, O.S.F. (formerly Sister Joseph Christi), 85, died Dec. 27 in Assisi House, Aston. She had been a professed member of the Sisters of St. Francis of Philadelphia for 52 years.

Sister Joan was born in Philadelphia. Prior to her entrance into the convent in 1964, she graduated from Villa Victoria Academy in Trenton and had earned a B.S. degree in nursing from Georgetown University.

She professed her first vows in 1967 and later earned an M.S. in family counseling from Loyola University in Baltimore. During her years in ministry, Sister Joan served in health care as a nurse, family counselor and chaplain.

Sister Joan ministered for 16 years in the Archdiocese of Philadelphia. Her ministry included working with the retired sisters at St. Mary Convent in Bryn Mawr, as an instructor at St. Agnes School of Nursing, and as a chaplain at both St. Mary Medical Center and Mercy Catholic Medical Center in Langhorne. She also served as a volunteer at Riddle Memorial Hospital.

During her 10 years in the Diocese of Allentown, Sister Joan ministered at St. Joseph Hospital in Reading. She also worked at both St. Joseph Medical Center in Towson, Maryland, and at St. Francis Hospital in Wilmington, Delaware.

In 2015 Sister Joan moved to Assisi House where she served in prayer and hospitality ministry until her death.
The funeral Mass was celebrated Jan. 3 in Assisi House and burial followed in Our Lady of Angels Cemetery in Aston.

Sister Joan is survived by nieces, nephews and by her Franciscan family. Donations in her name can be made to the Sisters of St. Francis Foundation, 609 S. Convent Road, Aston, PA 19014.