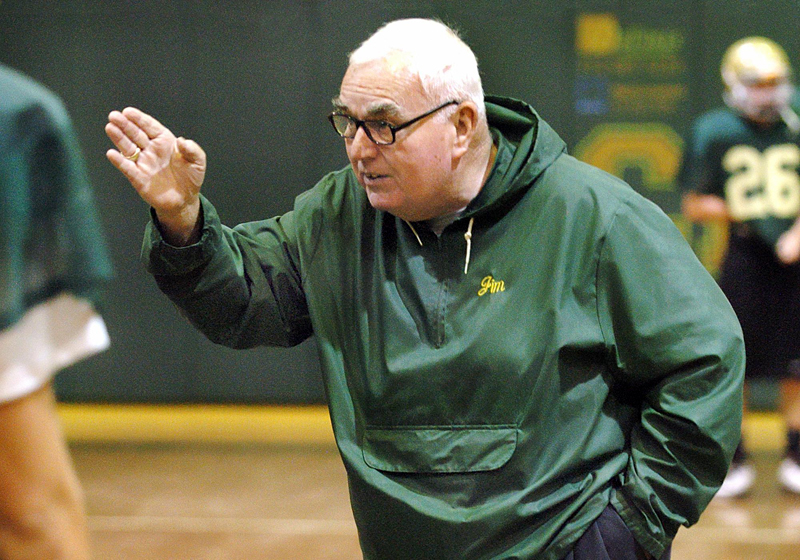 Jim Algeo was a busy guy, but he always had time to talk to the media about his football players.

You could call him at 9 o’clock in the morning. You could phone him at 10:30 at night. You could talk to him on the football field, at a party, or at a local supermarket. It didn’t matter the time, didn’t matter the place. Ask a question about one of his guys, and regardless if he was a standout senior or a deep reserve junior, Algeo would provide enough information and quotes to fill an entire notebook.

The former legendary coach at Lansdale Catholic died Jan. 20 at age 83. He won 294 games, 11 titles and a state championship during his magnificent career. During his final four seasons, Lansdale Catholic was a member of the Philadelphia Catholic League.

One of Algeo’s quarterbacks, Joe Judge, was recently named head coach of the New York Giants. A member of the class of 2000, Judge issued a statement concerning his former coach.

“Coach Algeo was a great coach and even better man,” said Judge. “He taught us the importance of working hard for the man next to you more than our own individual goals. His ‘Faith, Family and Football’ priority system made us keep what we did in perspective.”

Patrick O’Hara was a standout player under Algeo before graduating in 2010. He recalled how when former players would stop by at practice, Algeo would pause and introduce them to the current players.

Regardless of how long it had been, Algeo always remembered their name, year and number.

“It was one of many examples that showed how much he cared about you as a person,” said O’Hara. “He wasn’t just about coaching players. He genuinely cared about every single one of them. It showed.”

Toward the end of his life, Algeo was struggling at an assistant living facility. O’Hara’s father Pat, who played on Algeo’s first team at Lansdale Catholic as a junior before graduating in 1970, is a eucharistic minister at St. Maria Goretti Parish in Hatfield and on Mondays he brought Communion to Algeo.

Pat O’Hara said he was “in awe” of the special interaction between the two.

“Two tremendous gifts,” said O’Hara. “The Blessed Sacrament, and someone who had had such a tremendous influence in your life.”

O’Hara contacted Algeo’s daughter Bridget, who in 2019 authored a book titled “Football Family: The Story of Jim Algeo and the Rare Breed of Lansdale Catholic.” (Order it here on Amazon.) O’Hara relayed what an “amazing feeling” it was to be one of his former players able to share in something so beautiful and meaningful.

“She got back to me and told me how her dad had told her what a tremendous feeling it was for him to have one of his former players bring him Communion,” said O’Hara. “It was so special. I really was in awe.”

Patrick O’Hara was moved by his father’s interaction.

“When we were young players, we got shirts with the saying ‘Faith, Family, Football.’ At that time, it was more of a cool thing to get a new shirt,” said O’Hara. “Then as it comes full circle, and at the end of Coach’s life his faith was so obviously engrained in him as a person, the saying takes on an entirely different meaning.

“It’s faith that is being lived out. It was more than just words. When Coach Algeo said something, he meant it.”

NEXT: Catholic leaders put local food on the line for Super Bowl matchup