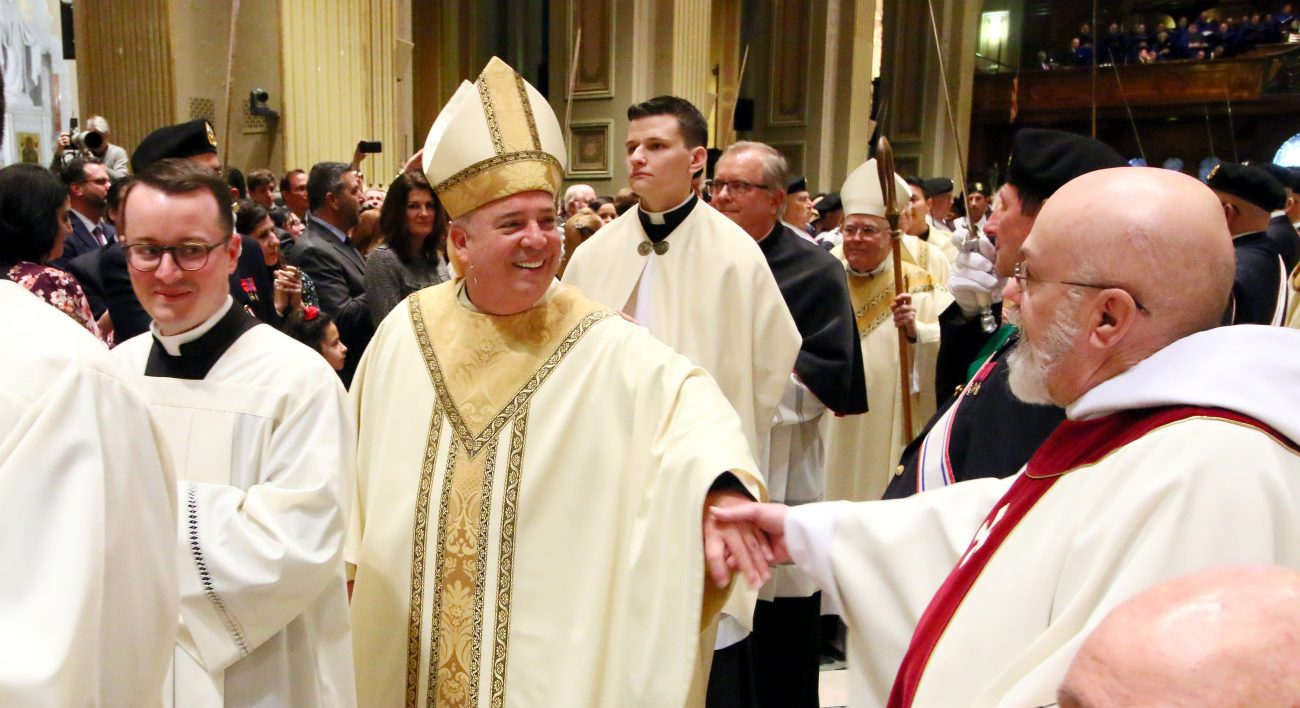 Archbishop Nelson J. Perez greets priests and others in the congregation as he enters the Cathedral Basilica of SS. Peter and Paul for his Mass of installation as Archbishop Philadelphia Feb. 18 in Philadelphia. (Photo by Sarah Webb)

Archbishop Nelson J. Perez placed a mark of familiarity on the formality of rites in the Mass that installed him as the new archbishop of Philadelphia Tuesday, Feb. 18 in the Cathedral Basilica of SS. Peter and Paul, Philadelphia.

Ascending to the basilica’s cathedra, the Greek word for the chair of authority as bishop of a diocese, Archbishop Perez, 58, became the youngest archbishop in the United States and its third archbishop of Hispanic heritage. His parents emigrated from Cuba.

A full-throated roar rising from the overflowing congregation in the basilica and its adjoining chapel of more than 2,000 people plus countless more viewing on television and the internet confirmed not a mere welcome for an archbishop, but a welcome home for a native son.

Archbishop Perez was ordained a priest for the Philadelphia Archdiocese in the same cathedral in 1989.

In a break with protocol in which the celebrant waits at the rear of a procession into church, prior to the Mass Archbishop Perez stood by the door into the cathedral greeting each of the hundreds of archdiocesan and religious priests with warm handshakes, hugs and smiles. He was among his own, and it was not the first such expression of the day.

In it, he thanked many planners for the liturgy and its participants in a relaxed style and physical warmth as he roamed the polished marble floor.

He noted the presence of Philadelphia’s now two retired archbishops of Philadelphia, Cardinal Justin Rigali and Archbishop Charles Chaput, whom he praised for his “great steadfastness” in making difficult decisions regarding parish life and archdiocesan finances during his eight-year administration, which “brought him great suffering and criticism,” Archbishop Perez said.

He praised his predecessor’s “faithfulness and courage,” and said the archdiocese “owes this man a debt of gratitude,” for which the congregation stood in applause.

Besides the more than 50 bishops from across the country, Archbishop Perez addressed the hundreds of priests and deacons in attendance directly, telling them “I need you” and referring to his brother priests as “us.”

He did not shy from the clergy sexual abuse crisis, which he called “a sad betrayal of some of our own who deeply hurt those they were supposed to be serving.”

“We are deeply sorry,” he said, pledging to “work with hope, that we will be the source of healing.”

Hope, in particular “Jesus, hope for the world,” was the theme of Archbishop Perez’s homily.

“The source of our hope is Christ,” who has “traversed 20 centuries of history” with his people, “sometimes rejoicing, sometimes saying, ‘these people are a piece of work,’” the archbishop said.

Throughout that history, Christ’s word and his body and blood in the eucharist “where he feeds us food for the journey” have remained, Archbishop Perez said. 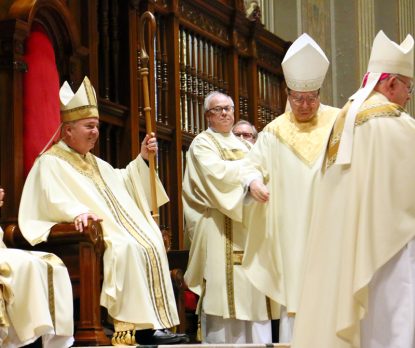 Archbishop Nelson J. Perez takes his seat in the cathedra for the first time as the 10th archbishop of Philadelphia. (Sarah Webb)

He built his theme to a crescendo with a challenge for the faithful in the archdiocese: “Wherever you find yourself on the journey, it is time — time to reach out and grab the Lord’s hand.”

Just as in the Gospel of Matthew (9:20) a woman with a hemorrhage touched the Lord’s garment and was healed, so now “it is time to reach out to him — he is there,” said the archbishop.

“It is time to reach out, to come back to church, to the Lord in his Word and to the altar.”

As to his plan for a pastoral vision as he begins to shepherd the Philadelphia Archdiocese, “I have no plan,” he said. “I want to visit, listen and learn. I do embrace the vision of Pope Francis in ‘The Joy of the Gospel.’”

The pope’s 2013 apostolic exhortation called for “a renewed personal encounter with Jesus Christ” and, as Archbishop Perez echoed, for a “church which goes forth as a community of missionary disciples.”

These are disciples “who know that the Lord has taken the initiative,” the archbishop said. “He has loved us first and therefore we can move forward boldly, making the initiative to go out to others, meet those who have fallen away, stand at the crossroads and welcome the outcast. That is the vision.”

He concluded by asking the people to remember a short sentence that he also asks the young people he sacramentally confirms, never to forget: “Never underestimate the power of the Spirit of God working in you, through you and despite you,” he said.

The Mass proceeded with music both festive and sublime, performed by the archdiocesan and cathedral choirs, Philadelphia Catholic Gospel Mass Choir and the Coral Hispana de Filadelfia, along with talented musicians.

Numerous groups representing the many facets of Catholic life in the Philadelphia Archdiocese lined up to greet the archbishop during the Mass, including families, ethnic groups, religious, students, educators, Catholic social workers, young adults, ecumenical and interfaith representatives, and clergy.

One of them reflected on the day’s moving experience in the spirit that might please the new archbishop.

“It was a very hope-filled and joyful day,” said Father Keith Chylinski, a Philadelphia priest on the faculty of St. Charles Borromeo Seminary. “There was a sense of coming home to the Lord’s church, where we are at home. In our relationship with the Lord, we are home. We come to a place of infinite hope, despite the challenges.” 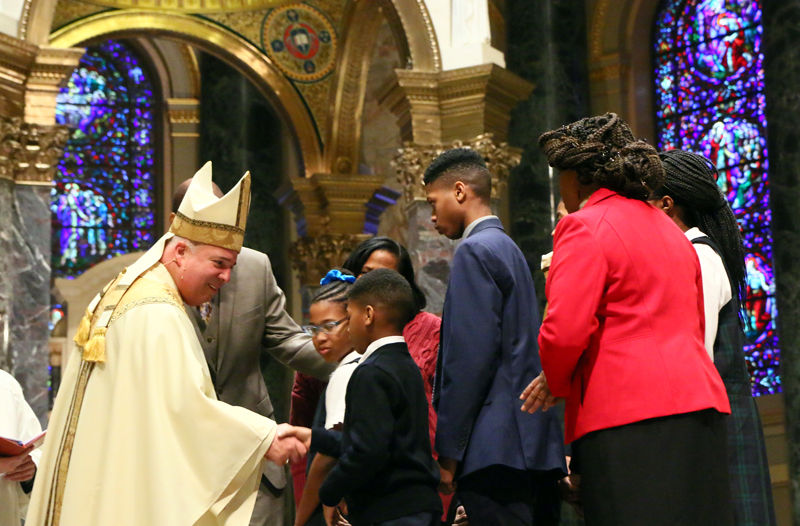 Archbishop Nelson J. Perez greets the Clark family, including husband and wife Philip and Shakirra Clark of Philadelphia, members of the Parish of the Cathedral Basilica of SS. Peter and Paul, during the Mass of installation Feb. 18. (Sarah Webb)