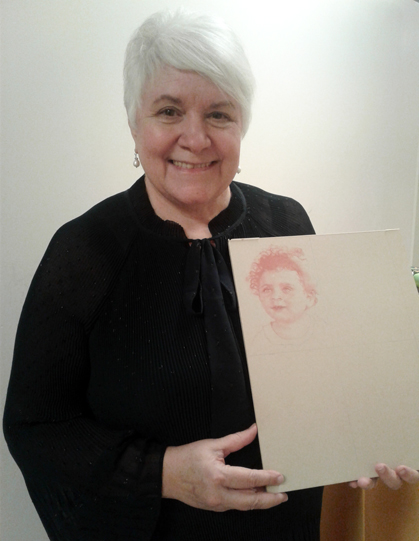 Mary Burkett shows her unfinished portrait of Faine, a little girl from Lithuania who was murdered in the Holocaust. The drawing will be part of a portrait series that will be framed as 21st century mothers do with photos of their children. (Photo by Maria Pisano)

“To view Mary Burkett’s art is to risk being transformed.”

Those words greeted the Philadelphia community as guests gathered at Roman Catholic High School in Center City on Feb. 19 for the opening reception of “Beloved: Children of the Holocaust,” an art exhibit that displays 27 portraits of innocent lives lost during the Holocaust.

Presented in partnership by Roman Catholic and Congregation Rodeph Shalom, the exhibit is free and open to the public at the Howard Center for the Arts from 4 to 8 p.m. on Feb. 25 and March 4.

When viewing each child’s captivating gaze, it may be hard to believe that Mary Burkett has no formal art training. In 2017 the retired pediatric nurse took up drawing as a new year’s resolution. While searching for subject material, an online photograph of Hersch Goldberg caught her attention.

“He just went straight from the screen into my heart and I knew that I was supposed to draw him,” said Burkett.

What Burkett didn’t know was that 5-year-old Hersch Goldberg died at the Auschwitz concentration camp in 1944. Upon learning this, she researched other children whose lives taken by the Nazis in the Shoah. In just one month, she completed 27 of their portraits.

As she researched photographs, she made sure only to draw pictures that were taken before the war. She wanted to draw the children when they were loved and able to be kids.

It was never Burkett’s intention to share their portraits with the world, but now it’s her mission to give the children a voice. The “beloved” now travel to schools, universities, synagogues, churches and other organizations to impact and inspire.

“I wanted to honor their lives and I wanted to give them a voice. As it turns out, they have a lot to say to the world,” said Burkett. 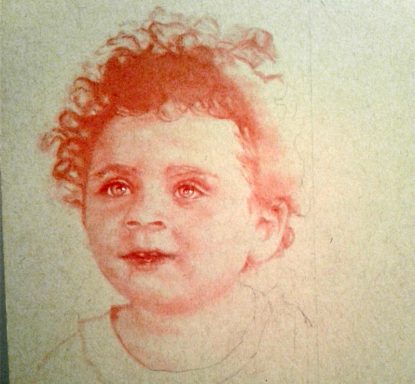 A image shows detail of Mary Burkett’s unfinished portrait of Faine, a little girl from Lithuania who was murdered in the Holocaust.

In the weeks before the exhibit’s debut, students visited the National Museum of American Jewish History, the National Liberty Museum and the Philadelphia Holocaust Plaza.

Senior Justin Medlock was impacted by the forbidden art created by Jewish and Polish prisoners at Auschwitz, which he viewed at the National Liberty Museum.

“It was heartbreaking to see the struggle they had to go through,” Medlock said. He noted the heroism of those who risked their lives to create art. “They are still the heroes that we can look up to today and try to be like.”

Charlie Hersh, education coordinator for the National Museum of American Jewish History, taught students about the experience of Jews in America and how it differs from Jewish experiences in other parts of the world.

He explained that there can be a tendency only to look at the Holocaust when studying Jewish history, but students should learn about the breadth and depth of Jewish history and tradition.

Along with Burkett’s art at Roman Catholic is a display of Jewish artifacts from the 17th to the 20th centuries on loan from Congregation Rodeph Shalom in Center City.

Hersh explained that Jewish tradition is a “lived and living tradition.” That tradition lives today in the home of Dorothy and Mel Egber, who attended the opening reception of “Beloved: Children of the Holocaust.”

Looking at the glass case, Dorothy pointed out artifacts that she also has at home, such as wine cups and a matzo cover. After admiring the menorahs from the 19th and 20th centuries on display, her husband showed a picture of their menorah, which his mother brought to the United States when she emigrated from Poland.

The portrait of 2-and-a-half-year-old Simone Frajermauer especially struck Dorothy. The little girl died at Auschwitz on Aug. 2, 1943, exactly one day after Dorothy’s birthday.

Burkett told the audience at the opening ceremony that a person in Brussels had contacted her and told her that his home once belonged to Simone Frajermauer and her parents.

The homeowner contacted Burkett in the hopes that a copy of Simone’s portrait could be hung in the family home. Burkett was happy to announce the portrait’s safe arrival.

The day after the opening ceremony, Burkett spoke to Roman Catholic’s students.

“I always say to (the students) that the future is in their hands,” she said. “It’s not in the hands of people my age, it’s in their hands. And I say to them, just remember these children and make good decisions when you’re leaders.” 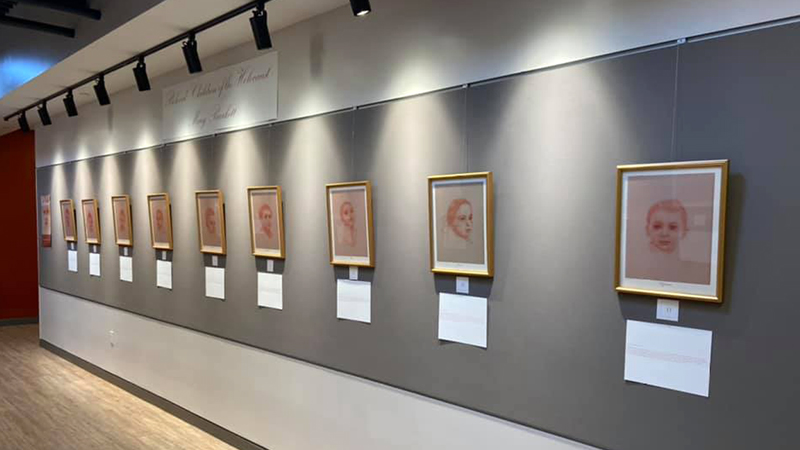 “Beloved: Children of the Holocaust” on display at the Howard Center for the Arts. As part of Roman Catholic High School, the center enhances fine and performing arts curriculum for students, and promotes the arts to the wider community. (Photo via Facebook)

NEXT: Rice Bowl program blends global, local to create enough for all