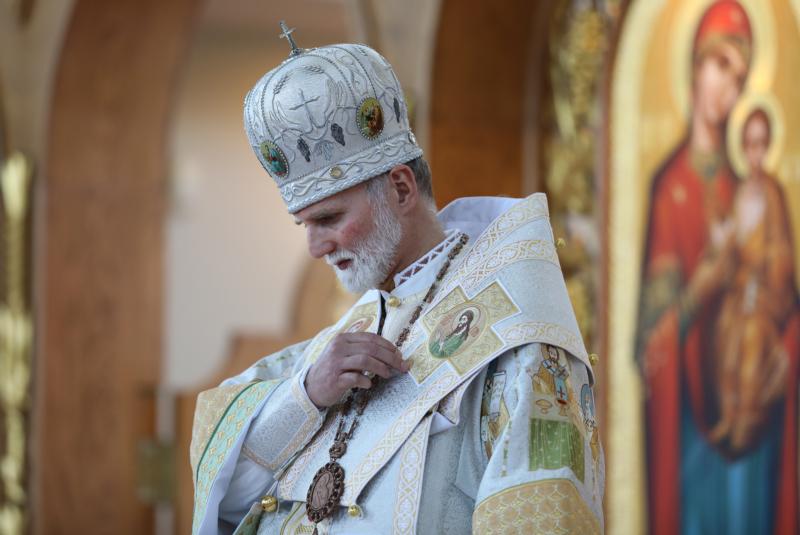 Metropolitan-Archbishop Borys Gudziak of Ukrainian Catholic Archeparchy of Philadelphia prays during his enthronement at the Ukrainian Catholic Cathedral of the Immaculate Conception June 4, 2019. A looming Russian attack on Ukraine poses a threat not only to that nation but to Europe and democracy itself, said the archbishop in a Jan. 17 interview with CatholicPhilly.com. (CNS photo/Bob Roller)

PHILADELPHIA (CNS) — Metropolitan-Archbishop Borys Gudziak of the Ukrainian Catholic Archeparchy of Philadelphia asked for forgiveness from the faithful under his leadership and urged church members to forgive each other at the start of the Great Fast observed by the Eastern Catholic churches.

“Forgive me for the offenses or disappointments, the unfulfilled expectations, for everything by which I have sinned against God and you in thought or word, commission or omission, undue pressure or lack of attention, criticism or silence,” Archbishop Gudziak said in a Feb. 24 letter to the Ukrainian Catholic community.

In urging people to forgive each other, the archbishop encouraged worshippers to empty and expunge “the cup of negative passions that may have been filled over the last year so that we may begin nimbly our common journey of the next forty days — the holy pilgrimage to the Lord’s Pascha (Resurrection).”

The resurrected Christ can be found in “our brothers and sisters, especially in those with whom we have issues, with whom something is not right,” he said.

Lent allows people to focus on opening their life to God, thus freeing themselves of anger, envy, lust, avarice and pride, the archbishop’s message said, while prayer, fasting and almsgiving cleanse and prepare people for the Passover, “our transition from death to life.”

Acknowledging that people are “bombarded with information and propaganda” that is difficult to escape, Archbishop Gudziak called on people to turn to “contemporary disciplines” to achieve peace and joy. He said he would unplug from social networks, limit time on the internet and encouraged the faithful to do likewise so that they would have more time for prayer and silence before God and to carry out the works of charity and fellowship with others.

“May repentance and forgiveness open our eyes, our senses, to see the face of him who takes the moral burden of our afflictions, betrayals and compromises, small and great, carrying them to Calvary and transforming them with his sacrifice,” he said.

In a separate pastoral letter to open the Great Fast, Archbishop Gudziak described the season as a time for repentance as well that allows for the “conscious transformation of our hearts, our minds and the very essence of our lives.”

Lent provides “the opportunity to seek release from those things we have allowed, often unconsciously, to hold us captive, yet which in and of themselves have no real power over us,” Archbishop Gudziak wrote. “Now, during the 40 days, we are challenged to do away with our passions, our preoccupations, our pride, our jealousy and anger. Now, we are assured that the doors of repentance are opened to those who knock.”

He also recalled how people enter the Lenten journey as individuals, but that they truly are not alone because they are on pilgrimage with family members and the church community.

The archbishop noted that Great Fast also is a time for the church community to unify with each other.

“On this journey with our eyes and our hearts free to follow Christ, we will be able to see in the new light people around us,” he said. “We will be able to listen attentively to those in need, those who are less fortunate than us in our community. We will be able to live our Christian vocation to preach the good news of Christ, to be missionaries and missionary community, a welcoming and hospitable community both for its faithful and for strangers.”

PREVIOUS: Men invited for inspiration, encouragement at Man Up Philly

NEXT: There’s ‘something about the ashes,’ says Archbishop Perez