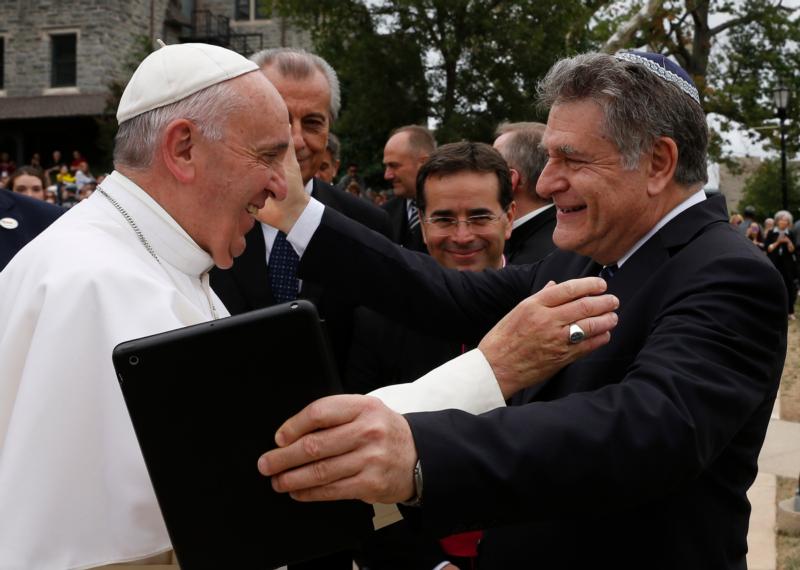 Pope Francis embraces Rabbi Abraham Skorka during a brief stop at St. Joseph’s University in Philadelphia, Sept. 27, 2015. Skorka, a longtime friend of the pope, said in a Jan. 27 presentation at the university that “a new hope has been born” for Jewish-Christian relations after centuries of persecution and misunderstanding. (CNS photo/Paul Haring)

Despite rising antisemitism throughout the world, Catholics and Jews are living in “a remarkable new age” in which they can both grow by understanding their differences more fully.

That’s according to Professor Philip Cunningham, co-director of the Institute for Jewish-Catholic Relations (IJCR) of St. Joseph’s University. Founded in 1967, the IJCR is the oldest university center of its kind in the U.S. created in response to the Second Vatican Council’s call for increased interfaith dialogue.

On Jan. 27, the IJCR hosted the first of a two-part series on “Jewish Views of the Religious ‘Other.’” Some 80 attendees listened as IJCR visiting scholar Rabbi Abraham Skorka – a longtime collaborator and friend of Pope Francis – traced “the 2,000 years of shared history” between Jews and Christians, while reflecting on key theological developments in both faiths.

“We need to create a new language and grammar for our new relationship and dialogue,” said Rabbi Skorka, adding that “from the ashes of the Second World War, through the efforts of many people, a new hope has been born.”

Rabbi Skorka observed that Jesus lived within the “multifaceted reality” of Late Second Temple Judaism (165 BCE to 70 CE), which featured “a wide range of ideas” – from priestly to political — about divinely anointed messiahs.

Jesus was “clearly devoted to the Torah (the five books of Moses, the prophets, and the writings)”, said Rabbi Skorka, and “creatively interpreted it in the light of his conviction that the reign of God was coming soon.”

Because this proclamation set him at odds with Rome, Jesus – like thousands of his fellow Jews – was crucified. In speaking of his resurrection, and in aligning more closely with non-Jewish Gentiles, Jesus’ followers diverged from Judaism, which itself underwent a transformation after the Roman destruction of the Second Temple in 70 CE.

The loss of the Temple “required Jewish leaders to create new forms of ritual and prayer,” said Rabbi Skorka, and “triggered a spiritual and communal rebuilding of Jewish identity.” Without the Temple as a place of sacrifice, Jewish belief evolved into the rabbinic Judaism of today, which focuses on the interpretation of the Torah and other primary texts.

Once “fellow minorities,” Christians and Jews became increasingly distanced from each other starting in the fourth century, when Christianity became the preferred religion of the Roman Empire, said Rabbi Skorka.

Jews also recognized these roots, said Rabbi Skorka, but regarded some Christian doctrines as idolatrous. In particular, the Christian understanding “that God was a Trinity of Father, Son and Holy Spirit” was “especially problematic,” he said, as was the idea that Christ had taken on human flesh.

Day-to-day life forced the two faiths to find practical ways of coexisting, said Rabbi Skorka. Medieval Jewish thinkers considered in depth “whether Jews could engage in commercial transactions with Christians” without endorsing idolatry. In the 12th and 13th centuries, central European rabbis concluded that Christians could “associate” with ideas (such as the Trinity) without becoming idolaters, although such beliefs were unacceptable for Jews themselves.

This concept of “shituf” was reaffirmed in a 2010 policy paper on minorities in Israel, said Rabbi Skorka.

Nonetheless, he said, “the long history of Christian persecution and occasional massacring of Jews” led to an unfavorable view of Christianity. The Crusades, the Inquisition, numerous expulsions and pogroms (organized slaughters of Jews) eventually “combined with racist ideologies” and “culminated in the Shoah (the preferred Hebrew term for ‘Holocaust’),” during which some six million Jews were murdered.

From devastation to dialogue

The Catholic Church responded to the Shoah at the Second Vatican Council (1962-1965), where “it became clear to the assembled bishops and cardinals that a change in the relationship with the Jewish people must occur,” said Rabbi Skorka.

In its declaration Nostra Aetate, the council “rejected the ancient assertion that Jews were cursed by God for rejecting Jesus and called for friendly dialogues and joint study with Jews,” he said.

Since then, and through the encouragement of Popes Paul VI, John Paul II, Benedict XVI and Francis, “many Catholics and Jews … have entered into a profound friendship (that) has never been seen in the last 2,000 years,” said Rabbi Skorka.

“My own friendship with Pope Francis is only one example,” he added.

Several Jewish religious leaders have issued a number of publications affirming Nostra Aetate and its aims. In 2015, the Center for Jewish-Christian Understanding and Cooperation in Israel released the document “To Do the Will of Our Father in Heaven,” in which several Orthodox rabbis suggested “that Christianity also has a holy covenantal relationship with the God of Israel,” said Rabbi Skorka.

The following year, three major Orthodox Jewish bodies (the Conference of European Rabbis, the Rabbinical Council of America and the Chief Rabbinate of Israel) released “Between Jerusalem and Rome” as a reflection on the 50th anniversary of Nostra Aetate. The document’s authors stated that they viewed “Catholics as our partners, close allies, friends and brothers in our mutual quest for a better world blessed with peace, social justice and security.”

As a sign of this partnership, said Rabbi Skorka, a number of Jewish historians and intellectuals have dedicated “considerable research and analysis” to the figure of Jesus. The 2011 publication of “The Jewish Annotated New Testament” featured the insights of more than sixty Jewish scholars, including IJCR co-director Professor Adam Gregerman.

“That really is an astonishing development of our times,” said Rabbi Skorka. “Medieval rabbis could not possibly have imagined that one day dozens of Jewish scholars would be analyzing Christian Scriptures.”

Challenges remain ahead, he noted, particularly with regard to “whether the existence of the State of Israel has any theological significance for Christianity.”

The Vatican’s 1993 establishment of full diplomatic relations with Israel “did not delve into religious questions,” Rabbi Skorka said, including whether “Christians, who see their religious tradition as universal, (can) relate to the Jewish stress on landedness.”

In his response to Rabbi Skorka’s presentation, Professor Cunningham said that “Catholic teaching about Judaism today can be summed up (by saying) that Jews and Christians are co-covenanting companions” who relate to God “in distinctive yet resonating ways.”

“Both believe that God is beckoning them to an inevitable future,” said Cunningham, a time “when all creation will exist in harmony with God’s will.”

Until then, he said, Christians and Jews enjoy a “holy relationship of mutuality” as they “(seek) the Holy One together.”

For more information on the Institute for Jewish-Catholic Relations and its upcoming events — including a Feb. 10 session by Rabbi Abraham Skorka on Jewish-Muslim relations — visit the IJCR website.