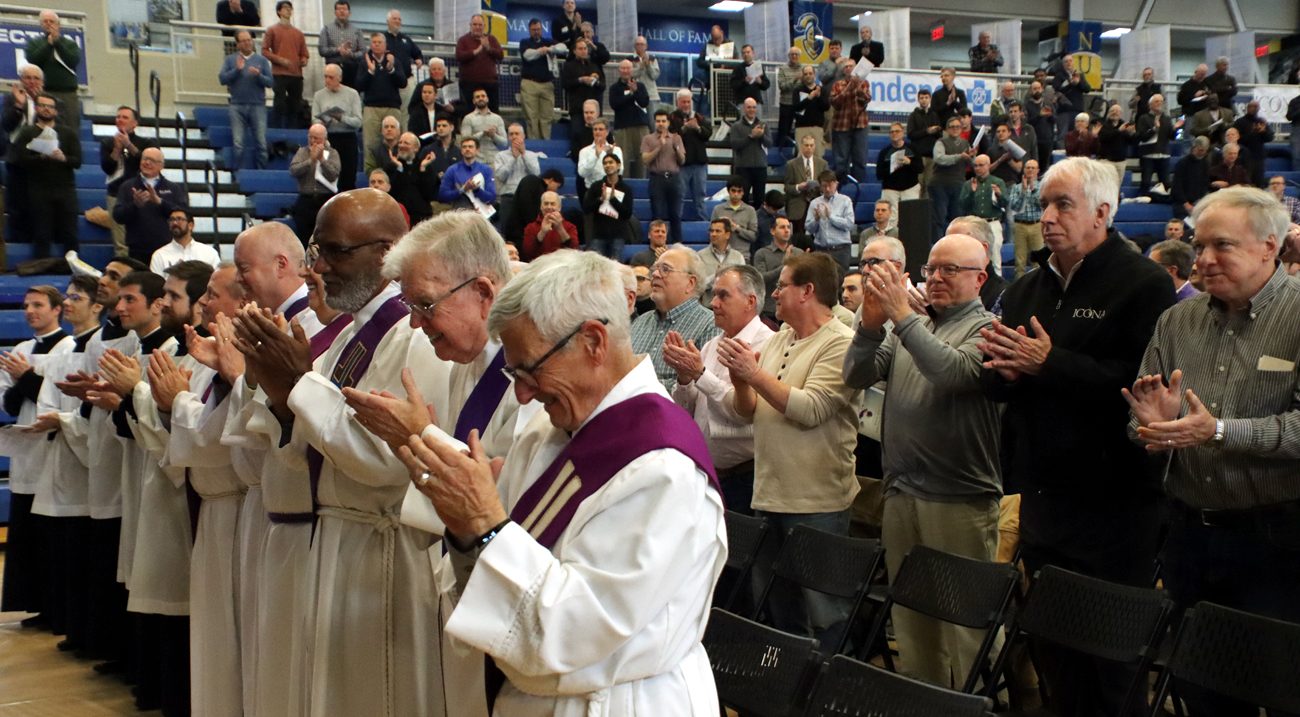 Men attending the 12th annual Man Up Philly conference had good reason to cheer the top speakers and time for faith and fellowship Saturday, March 7 at Neumann University. (Photo by Marc Cordero)

A packed Mirenda Center at Neumann University hosted about 1,500 men on Saturday, March 7 for the 12th annual Man Up Philly Conference.

As Archbishop Nelson Perez pointed out in his homily at the closing Mass, some people might insist that “people are losing their faith.” But gesturing to the supersized congregation, he said, “Really? Look! Are you sure about that?

“The world doesn’t have a lot of hope … but look around. This is hope,” the archbishop said.

Some men came for their first conference, while others returned for their fifth or sixth year. Still others gathered for the 12th time, never missing a single Man Up Philly. The conference continues to grow, this year setting a record with 1,200 men pre-registering.

So what is it about Man Up Philly that draws people together? Mark Forrest, the renowned Irish tenor who shared his musical gifts during Man Up Philly’s eucharistic adoration, shared his thoughts on that. 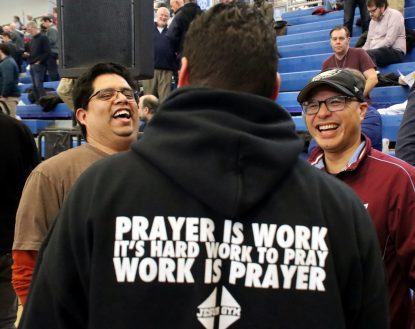 Men share a laugh at the Man Up Philly conference March 7. (Photo by Marc Cordero)

“This format is ideal,” said Forrest. “You have highly successful people in their own right, in multiple fields, that are relating to everyday life. Their delivery is tangible. You can relate to not just the success in their sports field, but to their individual struggles. We’re all in the same boat.”

“Any time there’s a group of guys getting together strengthening other guys I think it’s the most impactful thing,” Gallagher said. What men need most today is accountability with other men, he said, adding, “Hearing the stories and hearing everyone’s testimonies brings you to a place of encouragement.”

The young man heard about the conference “a million different ways” but mainly through friends, and attended Man Up Philly with his older brother. As a Brent Celek fan, he was especially excited to have the former Eagle at Man Up Philly.

Jacob Griste, a freshman at Ursinus college, is also a Brent Celek fan. Griste attended the conference for the first time, and was joined by his grandfather, father and younger brother. He appreciated the message of “being a better family.”

Celek certainly focused on family during his talk. In a casual interview-style talk with conference organizer Eustace Mita, Celek shared stories of growing up in Cincinnati as the oldest of five children and having a dream to play in the NFL.

He spoke highly of his grandfather, who taught him the most important 10 seconds are before you leave the house and right when you come home. Celek said he is never on the phone when he first leaves the house or comes home, because he wants to be present to his family. He said he loves his wife and three kids, but they won’t know that unless he shows them. 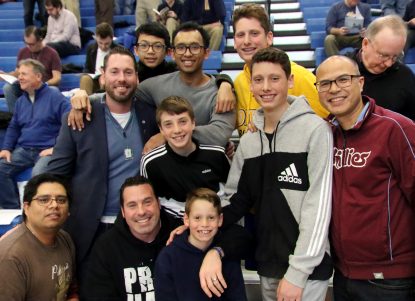 A group of men attending the 12th annual Man Up Philly men’s conference March 7 show they’re glad to share their faith and fellowship with other Catholic men at Neumann University. (Photo by Marc Cordero)

“I believed in myself, but I needed one other person to believe in me, because like you guys (at Man Up Philly) have been saying, we draw strength from others. And my grandpa was that for me in my life,” said Celek.

He then offered a challenge to those present: “To everyone that’s out there, the older men in this room, if you can just go find a young kid and believe in him … and make him believe in himself, I think the transformation in that kid’s life can be endless.”

Celek also shared how the Eagles players would gather before each game, and one player would talk about what his teammates and football meant to him. These gatherings made the team grow closer in the face of adversity, said Celek, and changed the culture of the team because they were willing to go far for a guy they loved.

Encouraging the men at Man Up Philly to learn from one another, Celek said, “God is in all of us. We have to act like it.”

Archbishop Perez called Man Up Philly an “oasis” on the men’s spiritual journey. Jim Kilcoyne from St. Martha Parish in Philadelphia echoed this thought. It even “beats coming to Florida,” Kilcoyne said.

The Man Up Philly model is spreading to other dioceses, with conferences now in New York and New Jersey. Those wanting to bring Man Up to their diocese can contact Eustace Mita at emita@icona.com.

NEXT: Catholic students get up and dance for special education