Despite coronavirus, faithful turn out for Sunday Mass 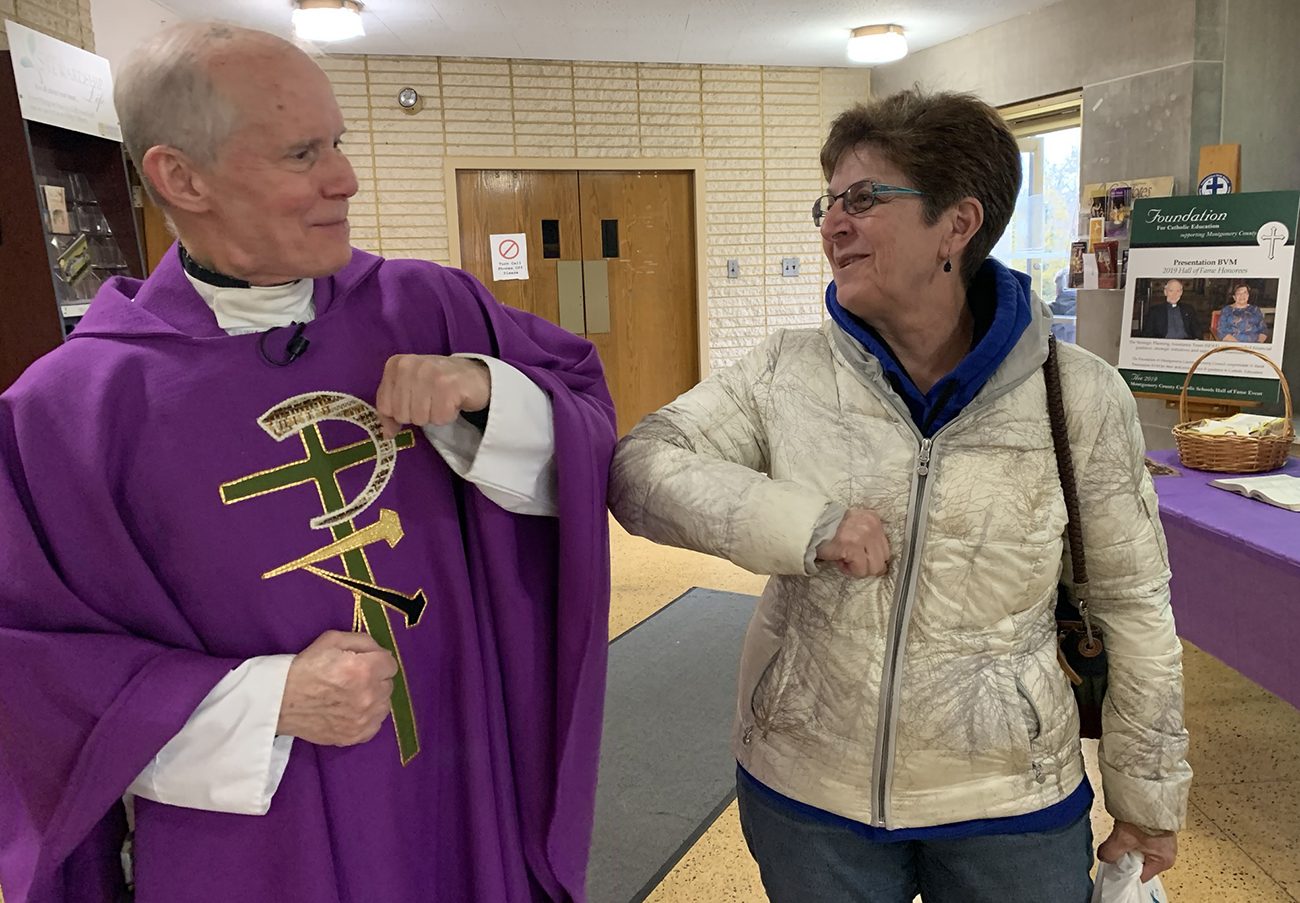 Father William Harrison, pastor of Presentation B.V.M. Parish in Cheltenham, bumps elbows with Elaine, a parishioner, after a March 14 vigil Mass. Despite a dispensation from the Sunday obligation due to the coronavirus, many area faithful opted to attend weekend liturgies, balancing precautions and piety. (Photo by Gina Christian)

Faithful at several archdiocesan parishes continued to attend Mass in person this past weekend, despite a dispensation from the Sunday obligation due to the coronavirus, or COVID-19, pandemic.

Many said they based their decision to attend on confidence in prevention protocols, such as handwashing and social distancing. They also cited a need for companionship and normalcy, along with faith in God’s protection.

Philadelphia Archbishop Nelson Perez, in union with all the Catholic bishops of Pennsylvania, issued the dispensation March 12. Public health officials throughout the U.S. and abroad are working to reduce large gatherings of people due to the highly infectious nature of the virus. Globally, more than 181,000 have been sickened, with over 7,100 deaths so far.

At present, all regularly scheduled Masses in the 214 parishes of the archdiocese will remain open to the public for those who want to participate – which is exactly what many did, including seniors, who are deemed at greater risk for infection.

“I stay home as it is, and I only come to Mass,” said 92-year-old Mary Blank, who attended the 4:30 p.m. vigil Mass at Holy Innocents Parish in Philadelphia. “My son didn’t want me to come to church, but I came. I told him, ‘I’m going to walk if you don’t take me.’” 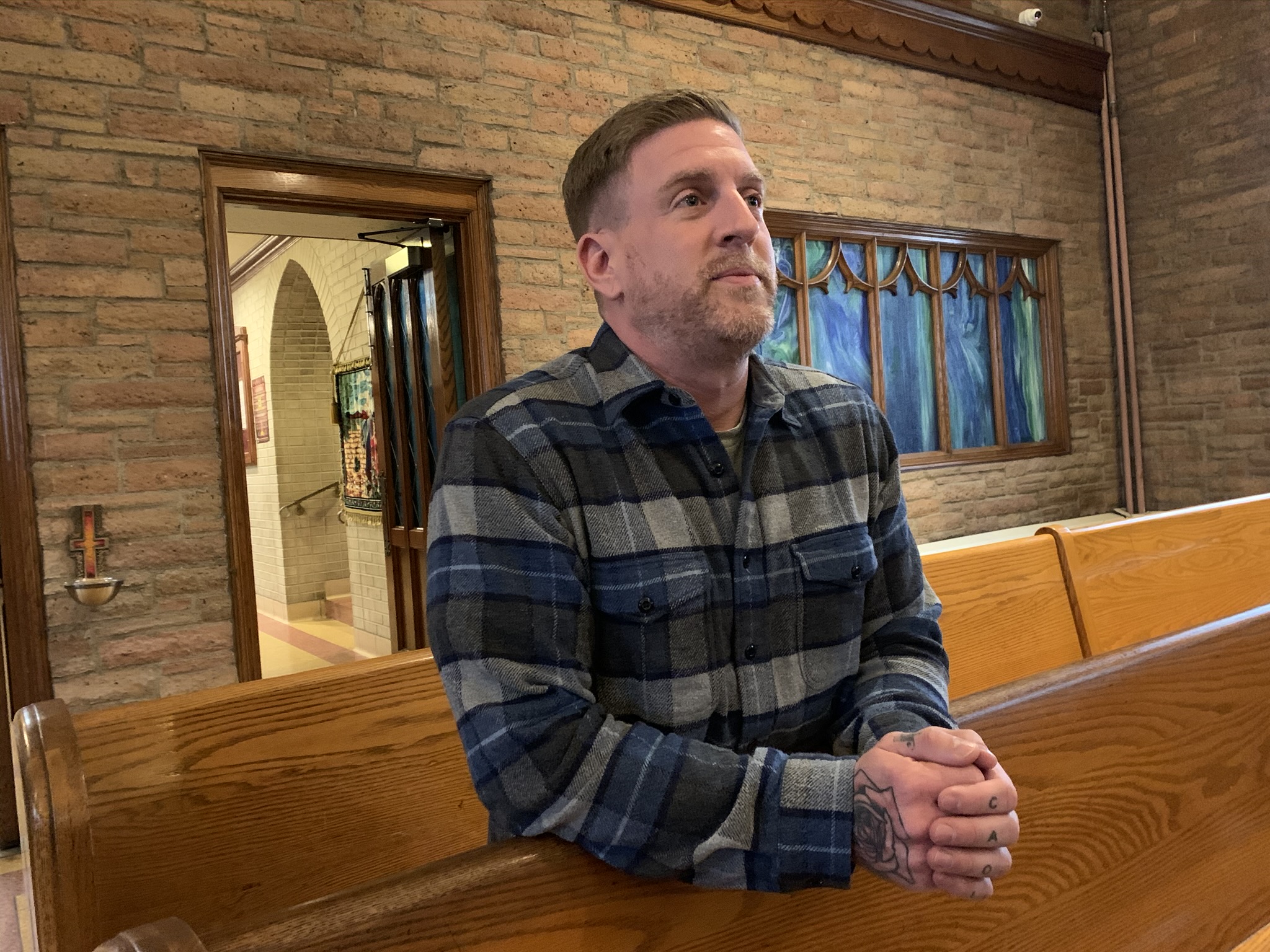 Health care worker Alan Landsman, a parishioner at Holy Innocents in Philadelphia, said he felt it was “important to show up” at a March 14 vigil Mass “even though it’s not required” due to a dispensation from the Sunday obligation to prevent the spread of the coronavirus. (Gina Christian)

Fellow parishioner Mary Tkaczuk said she felt comfortable due to the vigil’s small number of regular attendees – about 30 – distributed throughout Holy Innocents’ large church, which seats 1,200.

“Everybody’s spread out, and it’s mostly the same people who come here every weekend,” she said. “And it gave you something to come to, a normal thing, because everything’s cancelled. At least I could go to Mass at 4:30 like I do every week.”

Elaine Dynako, a parishioner of the Cathedral Basilica of SS. Peter and Paul, said that the opportunity to receive Holy Communion brought her to the March 15 Mass celebrated by Archbishop Nelson Perez, which was also livestreamed for the thousands of faithful who opted to remain at home.

In joining some 120 worshipers at the liturgy, Dynako – an older adult who uses a wheelchair – said she personally did not feel at risk.

“Not when I’m coming out to receive the body of Jesus Christ,” she said, adding that she plans to return as long as the cathedral remains open.

Nazario said that with televised Masses, which she routinely watches to compare homilies among celebrants, “you don’t get the Lord, the Eucharist.”

Both she and Darby felt the attendance of approximately 200 at the St. William Mass was comfortably below CDC-recommended public gathering limits in place at the time, which have since been reduced. 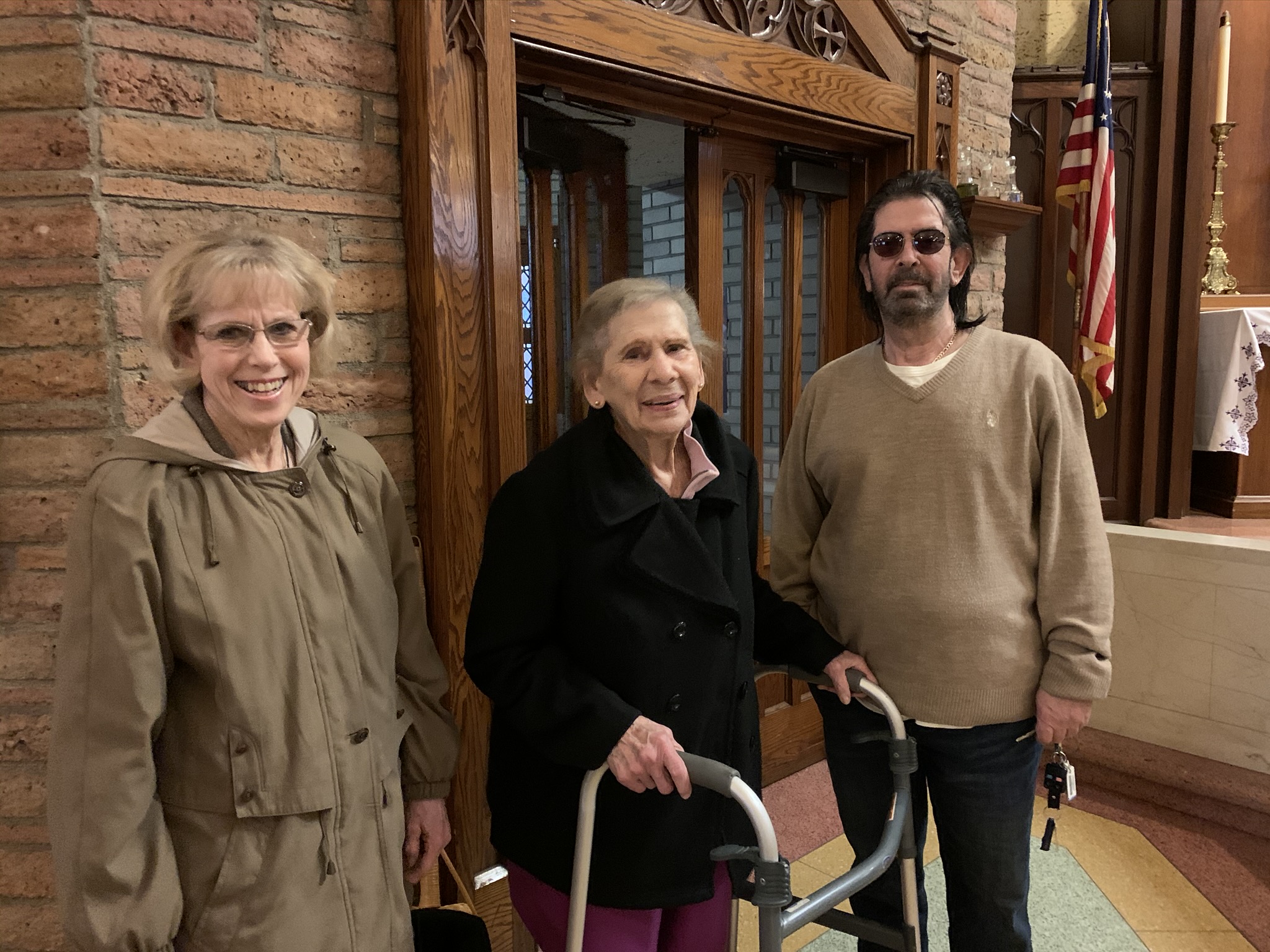 (Left to right) Mary Tkaczuk joined Mary Blank and her son Gary in attending a March 14 vigil Mass at Holy Innocents Parish in Philadelphia, despite an archdiocesan dispensation from the Sunday obligation due to the coronavirus. Mary Blank participated in the liturgy over the objections of her son, saying Mass is one of the few activities that gets her out of the house. (Gina Christian)

Younger worshipers also weighed coronavirus protection protocols against the desire to participate in person at Mass.

“It’s cold enough in here that germs don’t stand a chance,” joked Juliana Bernuado, a student at Holy Family University and a member of Holy Innocents.

Her mother Joanne also attended, while keeping her 88-year-old mother Josephine Deluca at home and (as an extraordinary minister) bringing her Holy Communion directly.

“I feel like this is something that’s important enough that I should continue to show up, even though it’s not required,” he said.

While leaving the church, he touched elbows with celebrant Father Vincent Tung The Pham – a gesture also extended by Father William Harrison, pastor of Presentation B.V.M. Parish in Cheltenham, to those exiting a March 14 vigil Mass.

During his post-communion announcements, Father Harrison noted that the parish would continue to celebrate Mass and offer Stations of the Cross. However, he said, “anything that’s not worship, we’re cancelling,” such as a planned movie night and poor man’s supper.

Those at Presentation’s vigil Mass endorsed that approach, and said they viewed Mass attendance during the pandemic as a matter of both practicality and piety.

“You just have to take precautions and be aware of other people and your surroundings,” said a parishioner named Elaine. “And that’s what we came here for, to pray for all the people who are affected and hope they find a vaccine quicker than they are anticipating. Hope and pray.”