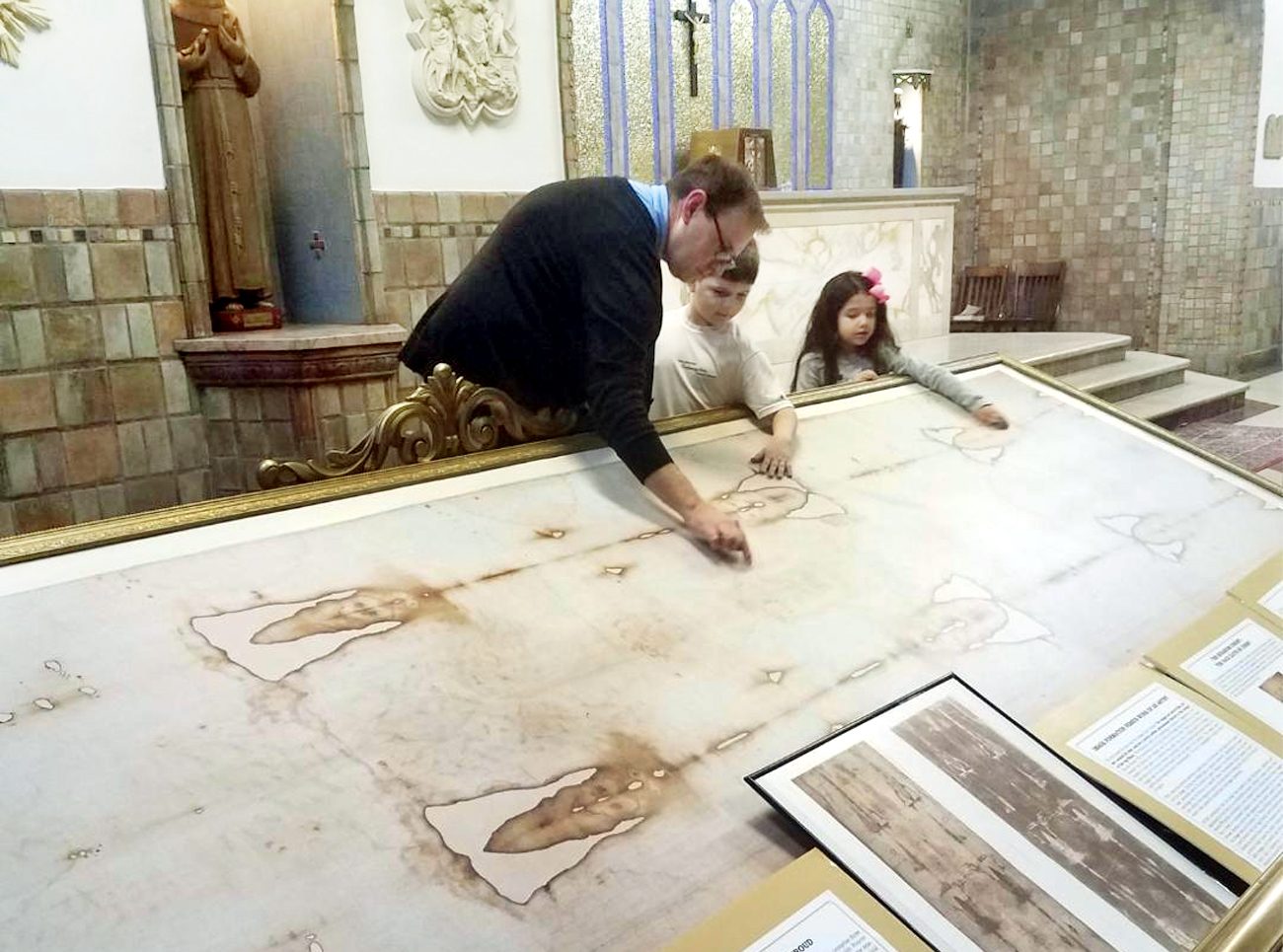 Edward Specht, director of religious education for Epiphany of Our Lord Parish in South Philadelphia, helps children inspect details of a replica of the Shroud of Turin on loan from the Ukrainian Cathedral of the Immaculate Conception in Philadelphia.

Since his October 2017 installation as the pastor at Epiphany of Our Lord Parish, Father Jim Casey has seen his church experience three beautifully decorated Advent seasons, but until this year, he had not been able to duplicate that delight during Lent.

The change comes courtesy of the Ukrainian Catholic Cathedral of the Immaculate Conception, which granted Epiphany of Our Lord and its South Philadelphia congregation the opportunity to host a replica of the Shroud of Turin, which many Christians contend served as the burial cloth for Jesus.

“I marvel each day over our good fortune in being able to present this to the community,” Father Casey said of the unexpected arrival, one of nine shroud replicas in the world. “I hope it enhances everyone’s faith and heightens our collective march toward Easter Sunday.”

Epiphany, located at 11th and Jackson streets in South Philadelphia’s Lower Moyamensing neighborhood, displayed the shroud replica from March 6 to 15. In doing so, the church is making good on the wish that parishioner Michael DelGiorno had held for close to two years.

“I was at the (Ukrainian) cathedral and learned that they lend out the replica,” he said. “I ran that by Father Casey, and here we are. I still can’t believe we have this honor. It just means so much to us to be able to share God’s role in our lives like this.”

Because he has called the parish his home for 74 years, one can certainly understand the joy that DelGiorno, who handled the shroud’s arrival at Epiphany, feels regarding the church’s distinction as a host.

But one does not need to be as wise as DelGiorno to appreciate the rarity and sanctity surrounding the replica. The 47 youths who comprise Epiphany’s Parish Religious Education Program took part in the excitement as they headed to church Tuesday evening, March 10 to inspect the shroud.

Measuring 14 feet by 4 feet, the replica bears the photonegative depiction of the front and back of a man whose wounds share similarities with those mentioned in Gospel accounts of the Lord’s passion and death. The replica inspired a few questions from the youngsters as they approached it, read about its history through interpretive signs also loaned through the cathedral and listened to Father Casey aid their sacramental preparation through an explanation of the Lenten season.

“We hold forever in our hearts the love that Jesus showed to us 2,000 years ago,” the pastor said to the dozens of children. “This shroud reminds us that we need to believe that God is with us at all times because he gave us such a great example of the triumph of good over evil.”

Upon the arrival of the replica, Edward J. Specht became emotionally overwhelmed not only over the uniqueness of the chance to host the shroud, but also due to its lessons and significance in Catholics’ spiritual formation.

“Looking at it and reading about what it has meant to people over the centuries, we can see pretty clearly that Jesus looked far beyond the agony that he endured so as to give us eternal life,” said Epiphany’s director of religious education, noting that the lower church has seen steady traffic during the viewing blocks of time.

“Just think about the power of his sacrifice. How many people can say they’d endure so much out of love for others? That’s why he’s the perfect model now and forever.”

NEXT: Masses suspended in Philadelphia Archdiocese due to pandemic