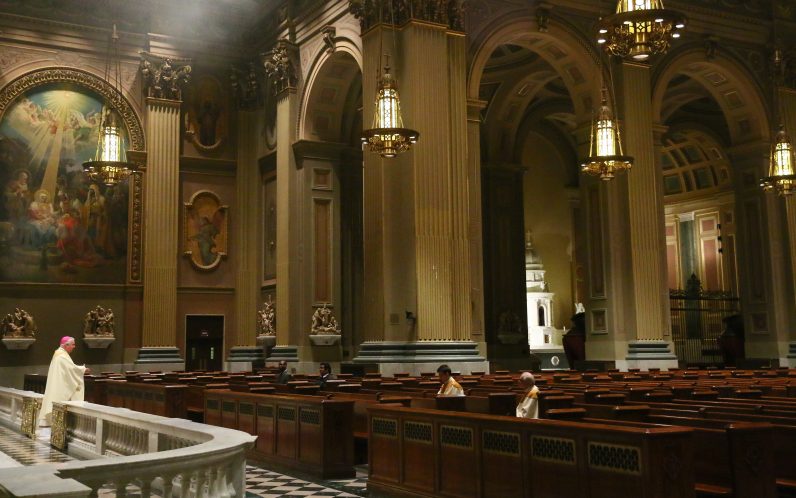 In a church usually packed with priests, Archbishop Nelson Perez gives his homily during the Chrism Mass April 6 at the Cathedral Basilica of SS. Peter and Paul, Philadelphia. (Photo by Sarah Webb)

The annual Chrism Mass during which the sacred oils used in important ceremonies of the church are blessed by the bishop at his cathedral traces back to the second century.

Usually but not necessarily the Mass takes place on Holy Thursday and the cathedral is crowded, especially with priests who together renew their priestly ordination promises. Also as a practical matter the priests attending take the newly blessed or consecrated oils back to their parishes to be used in the coming year.

This year it was a bit different — as are so many things because of restrictions on public gatherings due to the coronavirus pandemic.

Archbishop Nelson Perez chose to celebrate the Chrism Mass at the Cathedral Basilica of SS. Peter and Paul on Monday evening, April 6 instead of on Holy Thursday morning.

There could be no gathering of hundreds of priests commemorating the institution of the priesthood because of the stay-at-home orders, nor of the hundreds of lay people who make attendance an annual tradition.

Instead there were just about 20 people in the nearly empty cathedral, including the archbishop, his auxiliary bishops, other clergy necessary for the rituals, two lay readers, a few soloists and the organist.

But thousands more than could possibly fill the cathedral watched online. According to Dan Kearns of Kearns Media Consultants, who produced the livestreamed video of the Mass, 36,880 viewers watched the Mass on all the streaming platforms, including CatholicPhilly.com, the Archdiocese of Philadelphia’s website at ArchPhila.org and Archbishop Perez’s Facebook page.

Probably no one was more disappointed that it was impossible for the priests to gather for this special Mass than Archbishop Perez himself. He well remembers how many had come to his Feb. 18 installation as Archbishop of Philadelphia at the cathedral, and looked forward to this second gathering.

“We all long for the moment when we can gather around the altar,” he said of the priests, adding the Chrism Mass is “a day when priests often say to each other ‘Happy feast day.’ It is a celebration of the ministerial priesthood.”

Within the next week, he urged those who were following the Mass electronically, “Try to find the time to send an email or a text to the priests of your parish thanking them for being there.

“There are so many things we take for granted. We just think they will be there day in and day out,” he said.

To his fellow priests, Archbishop Perez urged that they take time to “remember the first encounter, when you realized the Lord was calling you to serve the church and his people.”

Highlights of the ceremony were the priests’ renewal of their ordination promises — many attending remotely via the flawless livestream — and the actual blessing of the Oil of the Catechumens and the Oil of the Sick, and the consecration of the Sacred Chrism.

All three have olive oil as their base although the Sacred Chrism also includes balsam, an aromatic resin. It is used in the sacraments of baptism, confirmation and holy orders, as well as the consecration of altars and the dedication of churches.

At this time it has not yet been determined when the priests will receive this year’s oils although it certainly will not be before the end of the present curfew.

In the meantime, priests and deacons can continue to use the oils still on hand, blessed at last year’s Chrism Mass.

The April 6 Chrism Mass may still be watched on Archbishop Perez’s Facebook page. 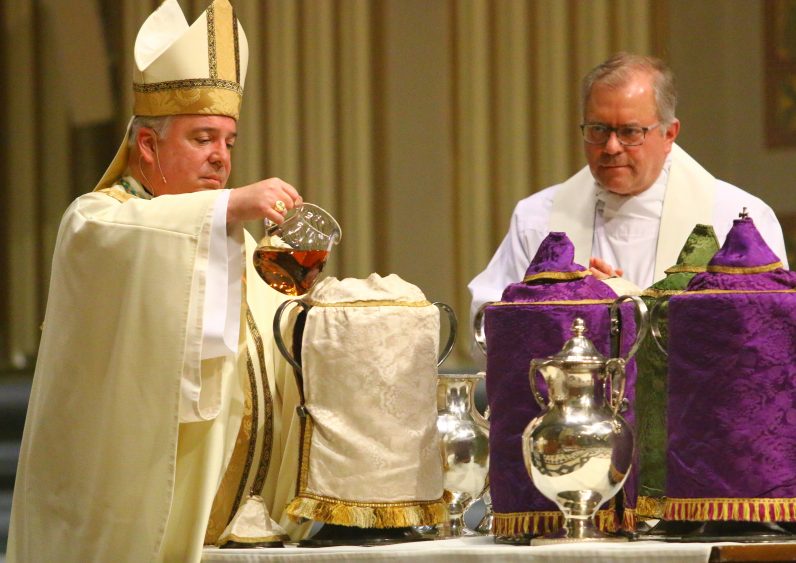 Archbishop Nelson Perez consecrates the Oil of Sacred Chrism during the Chrism Mass celebrated privately and streamed online Monday evening, April 6 at the Cathedral Basilica of SS. Peter and Paul, Philadelphia. Shown assisting with the rite is Father Dennis Gill, rector of the cathedral. (Photo by Sarah Webb)

PREVIOUS: Those who fed others now in food line themselves, driver says

NEXT: Catholics urged to enter ‘very heart’ of faith while at home