In times of plague, ‘greatest saints are born,’ says historian

Seminarians from St. Charles Borromeo Seminary in Wynnewood assisted with burials and with hospital care during the 1918 Spanish flu pandemic, which killed an estimated 50 million worldwide. (Photo courtesy of the Catholic Historical Research Center Digital Collections)

Pandemics and plagues have often marked periods “when the greatest saints are born,” according to church historian Msgr. Gregory Fairbanks.

“Christians have tried to do their best to minister to those who were suffering and didn’t have anyone else to take care of them,” said Msgr. Fairbanks, who teaches at St. Charles Borromeo Seminary in Wynnewood. “And they’ve risen to meet the occasion.”

Although “we’ve forgotten about plagues,” he noted, “they are part of our human experience.”

Early Christians were among those providing food, water and other assistance to victims of the Antonine Plague (165-180 CE), which killed some 7% to 10% of the Roman Empire’s population.

Concluding that Christians had incited the plague by spurning Rome’s gods, emperor Marcus Aurelius targeted believers. Despite the ensuing persecutions, the number of converts to the faith actually increased, as the general population took note of the Christians’ courage and compassion in response to the outbreak.

Similarly, Christians came to the aid of those affected by the Plague of Cyprian (250-270 CE), named for the saint and bishop of Carthage who chronicled his firsthand observations of the disease in De Mortalitate (“On Mortality”). Historians have speculated that the pandemic helped extend Christianity throughout the Mediterranean and the Roman Empire.

The Plague of Justinian, which struck in 542 CE, killed millions over a span of 225 years in a grim foreshadowing of “perhaps the biggest plague in human history,” said Msgr. Fairbanks.

From 1347 to 1352 the bubonic plague — or the Black Death — “wiped out about 40% of the population of Europe,” he said, with historians estimating that some 25 million to 30 million people died as a result of the infection.

Even in more recent centuries, said Msgr. Fairbanks, “we’ve regularly had to adjust to a plague situation,” as various waves of infectious disease have swept through the modern world. 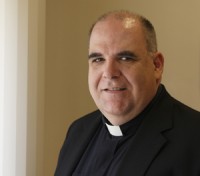 Msgr. Gregory Fairbanks of St. Charles Borromeo Seminary in Wynnewood is pictured at the Vatican May 7, 2014. A church historian, Msgr. Fairbanks said that Christians have often served heroically during periods of plague and pandemic. (CNS photo/Paul Haring)

Some 125 years later Catholics mobilized in response to the 1918 influenza pandemic, often called “Spanish flu” because the disease, which likely originated in the U.S., was first reported in Spain’s press.

The outbreak claimed some 50 million lives worldwide, including 675,000 in the U.S., according to the Centers for Disease Control (CDC).

(See a photo gallery from the archdiocesan archives, here.)

“People were literally dying in their homes, and there was nobody there to either take care of them or to help with burials,” he said. “The cemeteries became overwhelmed.”

“If you go into Holy Cross Cemetery, you’ll see a grove of trees and an open area along the path,” said Msgr. Fairbanks. “That’s the area where seminarians dug trenches.”

On Oct. 25, 1918, the young men buried one of their own: third-year theology student Leo Naylor, who had contracted the flu after laboring for five days at Holy Cross.

“It was a very trying time,” Msgr. Fairbanks said.

Seminarians also worked at area hospitals alongside women religious such as the Sisters of St. Joseph and the Sisters Servants of the Immaculate Heart of Mary, taking on tasks from nursing to cleaning to kitchen work.

By Nov. 5, 1918, the students were back at St. Charles Seminary, and a contemporary chronicler of their experiences observed that the young men had literally followed the example of the seminary’s patron saint, who ministered to victims of a 1567 plague in his native Milan.

Then-Archbishop (and later Cardinal) Dennis Dougherty wrote to the seminarians, commending them for their “supernatural virtue … (that) prompted such heroism.”

Like current Philadelphia Archbishop Nelson Perez, Archbishop Dougherty “had to deal with a pandemic almost as soon as he was appointed,” said Msgr. Fairbanks, adding that “a good sense of history is always helpful.”

“When we look back in church history, we see men and women who stood up in times of great trial and turmoil, and made a difference,” he said. “They really showed that their faith would lead them through the difficulties of their time, whether it be plague, or great periods of war, or whatever the cause.”

NEXT: Knights of Columbus vow to leave no neighbor behind