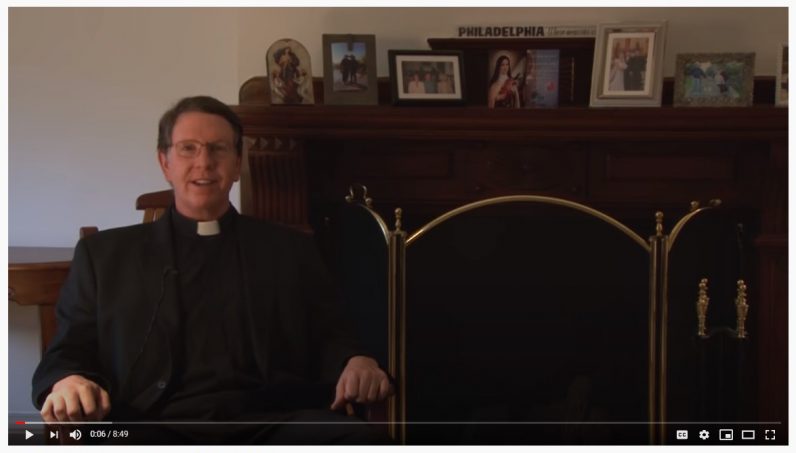 Father Matt Guckin, pastor of St. Francis de Sales Parish in Philadelphia and director of Catholic mission and identity for the archdiocesan Office for Catechetical Formation, has launched a 10-part video series reexamining the biblical plagues of Egypt in light of the coronavirus. (Father Matt Guckin)

Amid the modern-day plague of COVID-19, a Philadelphia priest is sharing his reflections on the 10 biblical plagues of ancient Egypt.

The 10-minute pre-recorded segments, produced by O.K. Video of Wilmington, are being uploaded to Father Guckin’s YouTube channel at 10 a.m. daily between April 27 to May 1, and from May 4 to May 8.

The divinely ordained calamities that enabled Moses to free the enslaved Israelites in Exodus 7:8 – 13:16 “relate so well to the plague that we’re in,” said Father Guckin, who also serves as director of Catholic mission and identity for the archdiocesan Office for Catechetical Formation.

Rather than offering historical or scientific explanations for the Egyptian plagues, Father Guckin said he presents “a spiritual interpretation” of the events, one that applies “not only to the current pandemic, but also to our everyday lives beyond the coronavirus.”

In particular, the plagues speak to the stark contrast between “monotheism and polytheism,” a divide that remains evident even in secular society, said Father Guckin.

While Egypt had one of the ancient world’s largest array of gods, modern culture is also “saturated with polytheism,” he said.

“We don’t think that, but it’s true,” said Father Guckin. “What is of highest worth to us? Where do we spend our time, and where do we direct our passion and energy?”

Christians themselves aren’t exempt from such idolatry, he added.

“I could say that I worship Jesus Christ, but if my passion actually lies with politics, then that’s my highest value, not Christ,” said Father Guckin.

Another aspect that he considers in the series is the “hand of God” in disasters such as plagues.

All-or-nothing interpretations of divine intervention in human affairs hold that God either directly sends, or remains completely detached from, misfortune.

The “beauty of Catholicism,” said Father Guckin, is a more nuanced understanding of the divine role.

“We distinguish between the active and the permissive will of God,” he said. “God definitely lets this happen, so we then ask, why?”

In the Exodus account, the reasons were twofold, said Father Guckin.

“First, God is working to set the Hebrew people free,” he said. “Secondly, he does so by attacking each of the Egyptian gods – the god of the Nile river, the god who protected them from locusts. Our God is even Lord of the flies.”

By toppling the Egyptian deities, the Lord “reminded us there is one God above all nature, and he rules over all,” said Father Guckin.

The dispositions of both Moses and Pharaoh are also extremely relevant to the current coronavirus crisis, he said.

“He complained throughout the exodus, and just because we might complain or want to give up at times, it doesn’t mean we’re not being faithful,” he said.

During the seventh plague, in which fierce hail “struck down everything in the fields” (Ex 9:25), Pharaoh admitted his sin and implored Moses and Aaron to intercede for him (Ex 9:27-28).

Yet he still failed “to make the right choice to set the Hebrews free,” said Father Guckin.

“There are real dangers to having a hardened heart,” he said. “And polytheism, putting our trust in false gods, never ends well. We need to put our faith in God.”