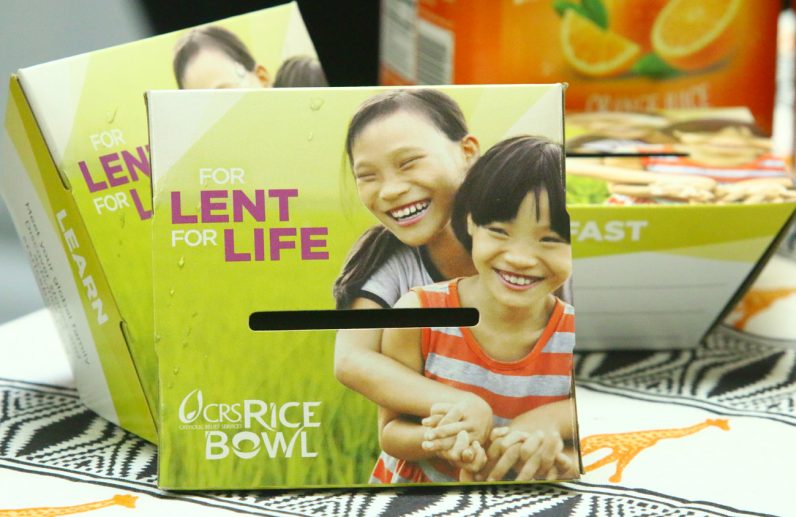 A Rice Bowl container is displayed at the Feb. 21 launch of the 45th annual Rice Bowl campaign at Our Lady of Hope Parish in Philadelphia. The coronavirus pandemic has made this year’s Rice Bowl program, a Lenten initiative of Catholic Relief Services, more vital than ever. (Photo by Sarah Webb)

As the coronavirus pandemic continues, this year’s Rice Bowl initiative has become more crucial than ever, said Anne Ayella, the Catholic Relief Services (CRS) director for the Archdiocese of Philadelphia.

Now in its 45th year, the annual Lenten initiative blends prayer, fasting and almsgiving to address poverty across the world and close to home.

Both global and local food insecurity have been deepened by the pandemic, said Ayella, which is why Rice Bowl donations are urgently needed.

Of each year’s collection, 75% goes to support humanitarian response and development programs that CRS – the official relief and development agency of the U.S. Conference of Catholic Bishops — operates in more than 100 countries.

The remaining 25% funds local efforts to alleviate hunger, such as those directed by archdiocesan Nutritional Development Services (NDS), which provides assistance to some 50 area food cupboards and soup kitchens.

Some NDS food pantries have seen a 100% increase in client volume due to the coronavirus, which has led to business closures and unemployment. In Philadelphia, the crisis has compounded the city’s existing food insecurity levels, already up 22% during the period 2012-2017.

“The fact that 25% of the funds stays local is really going to be important,” said Ayella. “When people give to Rice Bowl, it will continue to support their neighbors in need.”

At the same time, she added, the pandemic has raised awareness of the global scope of food insecurity and hunger.

In India, a government lockdown to prevent the spread of the virus led to thousands of migrant workers fleeing the nation’s cities, fearful that hunger – rather than the disease – would kill them.

“The crisis hits hardest for the most vulnerable populations, especially refugees, those in conflict areas, and those who lack access to clean water,” said Ayella.

The change collected in the cardboard Rice Bowl containers has added up considerably over the years. Since its 1975 inception in the Diocese of Allentown and its adoption by the Catholic Church nationwide in 1976, the program has raised more than $250 million. Some $62.5 million of the total has funded U.S. diocesan outreach ministries and $187.5 million has assisted CRS’s international response.

Typically, the iconic cardboard Rice Bowl containers are collected by parishes and schools, which then forward the monies to the archdiocese or directly to CRS.

However, public health directives to stop the spread of the coronavirus have altered that process, said Ayella.

She urged donors to “check with their parish or school” to verify how each is revamping its collection. Additionally, Rice Bowl donations can be made online or sent to CRS, which will ensure parishes and schools are credited for their 25% share.

Participating in Rice Bowl satisfies the soul as well as the body, said Ayella.

Through the campaign’s prayer resources — including an online Stations of the Cross that features Bishop Robert Barron — “you’re being fed spiritually,” she said.

“I recommend the Rice Bowl reflections especially for Holy Week,” she added. “You can give yourself a mini-retreat.”

This year’s Triduum, with its continued suspension of public liturgies, will be a difficult one for many faithful, but Ayella said the Rice Bowl program affords an opportunity “to be nourished by God in another way.”

NEXT: 180 staff laid off at Independence Mission Schools