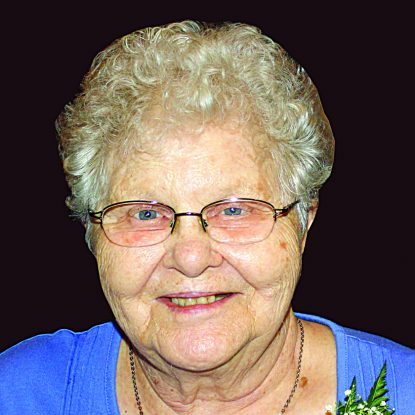 Sister Clarita and her twin sister were the last two children of eight born to Josephine and Henry Hackman. After graduating from Glasgow High School, Sister Clarita worked her father’s business and then in Kansas City as a steno-secretary.

She entered the Medical Mission Sisters in 1954, making her first profession of vows in 1956 and final vows in 1962.

In 1966, Sister Clarita returned to the U.S. and went to St. Joseph’s Hospital in San Francisco, California, where she studied to be an X-ray technician. She later earned an associate’s degree from Foothill College in Los Altos, California before going to Holy Family Hospital in Techiman, Ghana, where she worked in accounting and admissions for one year.

After spending a year teaching an X-ray course at St. Patrick’s Hospital in Ghana, Sister Clarita served as hospital secretary at Holy Family Hospital in Nangina, Kenya, for one year and then returned to HFH Berekum to work in the X-Ray department.

Returning to Philadelphia, Sister Clarita earned a bachelor’s degree in political science and international relations from Temple University in 1977. She went on to work as a special projects coordinator for the Nationalities Resource Center, a job which allowed her to work with the city’s non-English speaking population. Sister Clarita also did accounting and controller/management work for the center.

From the late 1970s into the ’80s Sister Clarita shared her financial expertise either as a volunteer or in a paid position for a variety of organizations in Philadelphia. She also served on many committees and held positions having to do with finance internal to the Medical Mission Sisters.

Sister Clarita enjoyed politics and was always current on the topics of the day. A hard worker, she was down to earth, ecologically savvy and in tune with nature. Her feisty and fun-loving spirit, along with her loving heart, will be missed.

Her private burial was held on April 16. Her funeral Mass will be celebrated at her Community’s North American Headquarters in Philadelphia at a later date.