Even with payouts for abuse victims, archdiocese’s finances improve 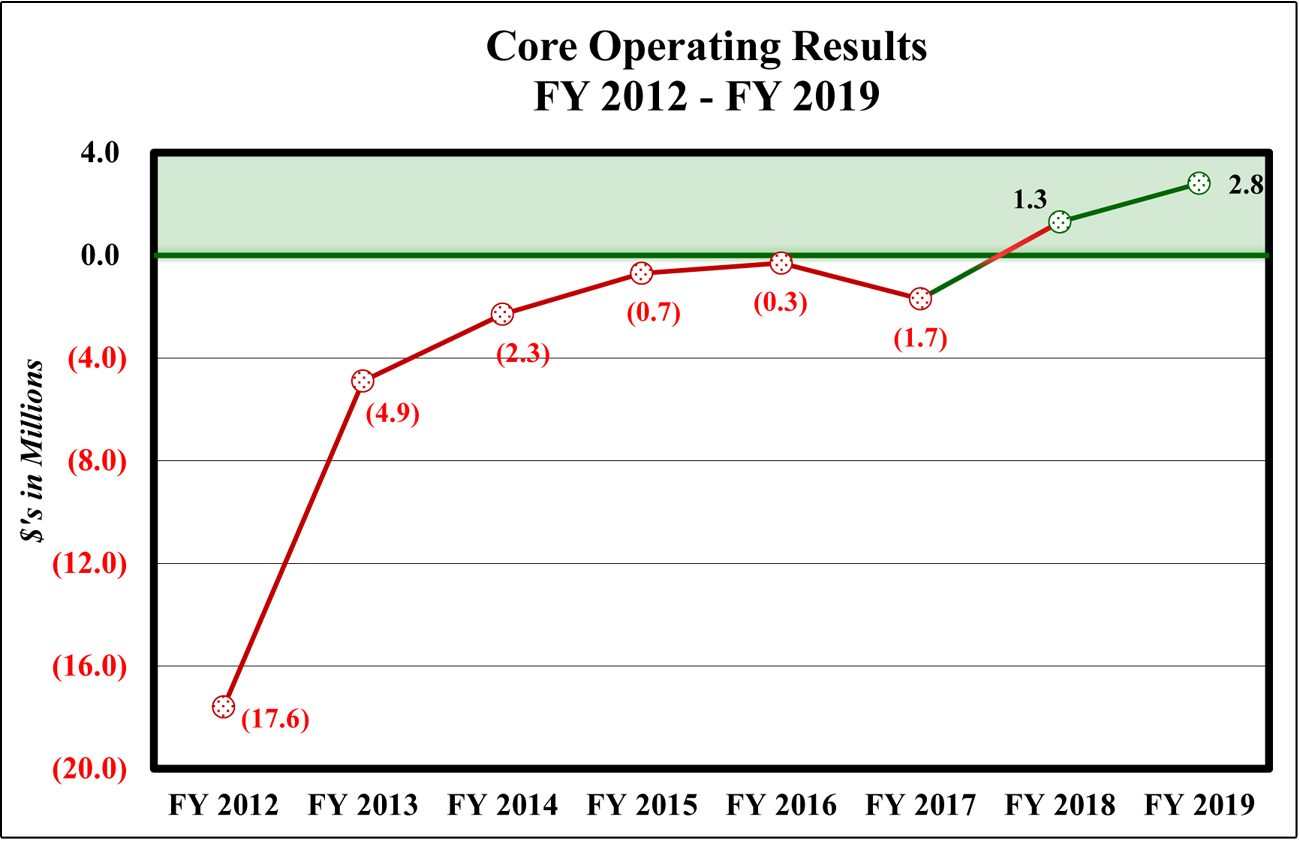 At a time when many families and Catholic parishes are worried about their bottom line in the economic fallout from the coronavirus pandemic, the Archdiocese of Philadelphia’s finances are showing cause for optimism.

Archdiocesan finances continue to improve after reaching their nadir of a $17.6 million deficit in 2012 to a $2.8 million surplus in 2019, even amidst the ongoing monetary payouts to victims of clergy sexual abuse in the archdiocese.

The annual financial statements audited by the firm Grant Thornton for the archdiocese in the 2018-2019 fiscal year ended June 30, 2019 show a $103 million deficit.

Key to understanding the archdiocese’s financial health in each fiscal year is determining the core operating deficit or surplus, which considers nonrecurring or “one-off” expenses, according to managers of the archdiocesan Office for Financial Services (OFS).

That office’s audited financial statements along with those of Catholic Social Services, the Office for Catholic Education and St. Charles Borromeo Seminary were all posted to CatholicPhilly.com May 6.

An accompanying explanation of the OFS statements shows the change in net assets for the fiscal year was a $103 million deficit. After adjusting for nonrecurring items totaling more than $106 million, the recurring surplus or core operating result was $2.8 million.

Chief among those nonrecurring items were transactions related to the Risk Insurance Trust and Welfare Benefits Trust of the archdiocese, which is self-insured.

Through those trusts, the archdiocese collects premiums ($60 million in fiscal 2019) and had claim expenses ($160 million) for general and property liability, workers compensation, auto and disability insurance for archdiocesan entities, plus health benefits for archdiocesan workers — and especially the Independent Reconciliation and Reparations Program. It was established at the end of 2018 to compensate survivors of clergy sexual abuse in the archdiocese.

By June 30, 2019, according to the audited financial statements, funding for the IRRP was $21.4 million. As of April 22, 2020, $43.8 million in compensation had been paid out to 208 claimants in the program, explained Archbishop Nelson Perez in a letter accompanying the financial statements.

A total of 615 individuals have submitted formal claims to the program run by independent administrators who determine the validity of the claims and the monetary amounts, which the archdiocese has pledged to pay without appeal.

“As your shepherd,” the archbishop wrote, “it is my duty to provide for the pastoral and temporal well-being of every member of our local church. Some of those most in need of our care and compassion are survivors of sexual abuse at the hands of archdiocesan clergy. I deeply regret the pain and suffering of survivors and any decisions that failed to protect them. The pain and damage are profound.”

Archbishop Perez noted the archdiocese estimates the total cost of the IRRP to be approximately $130 million.

How to honor the commitment to abuse survivors through the program has been the subject of a financial plan created by church financial managers.

The seminary also made a bridge loan of $7.5 million to the archdiocese and reserved more than $36 million for the development of a new seminary location. In the 2019 fiscal year, St. Charles completed the sale on its Wynnewood property to Main Line Health for a gross sale price of $43.5 million.

Other sources of funds include selling or leasing certain church property, which Archbishop Perez estimated at $33 million.

Parishes would be unaffected by any archdiocesan property sales since financially the parishes operate independent of the archdiocese.

While CFO Fisher did not specify which properties would be sold, the archdiocese is considering “a variety of sale and lease transactions with a focus on the disposition of assets that would generate the greatest available proceeds to fund the IRRP while preserving the overall mission of the church for the benefit of the faithful and all those in need who are served by her charitable ministries,” he said.​

One project with high potential reward for the archdiocese is the planned development of the Cathedral Block Project. Part of the property on which sits the Cathedral Basilica of SS. Peter and Paul would be developed in phases into residential and commercial enterprises. The project is not expected to affect the cathedral or its operations.

In addition to the payments and sale or lease of properties, the archdiocese may rely on a total of $25 million in loan commitments from CSS and the Priests Retirement Benefits Trust.

Archbishop Perez wrote that “any restricted donations made directly to the archdiocese or to the other entities providing funding were used for their donor-intended purposes. Furthermore, the funding plan for the IRRP allows for the continuation of all of the other vital missions of the archdiocese while honoring our resolute commitment to survivors.” 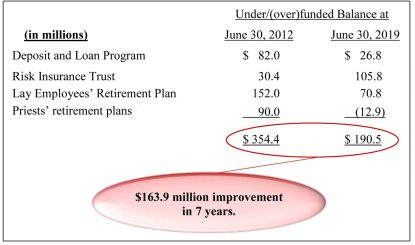 In addition to the healthier annual financial position, the archdiocese’s long-term obligations are showing dramatic improvement. In 2012 the balances of four archdiocesan funds — Risk Insurance Trust, Deposit and Loan Program, Lay Employees Retirement Plan and priest retirement plans — were underfunded by more than $350 million. As of June 30, 2019, that figure collectively had shrunken to about $190 million.

Actions in recent years have shored up the Deposit and Loan Program — a kind of church bank that accepts deposits while earning interest and makes loans to parishes for their needs — and the retirement plans for priests and lay workers.

But the Risk Insurance Trust and its expenses for the IRRP will require those church property sales, payments and loans to bring it in balance for the future.

PREVIOUS: Catholic experts advise on coping with anxiety of pandemic

NEXT: Archdiocese explores next steps in reopening churches for Mass