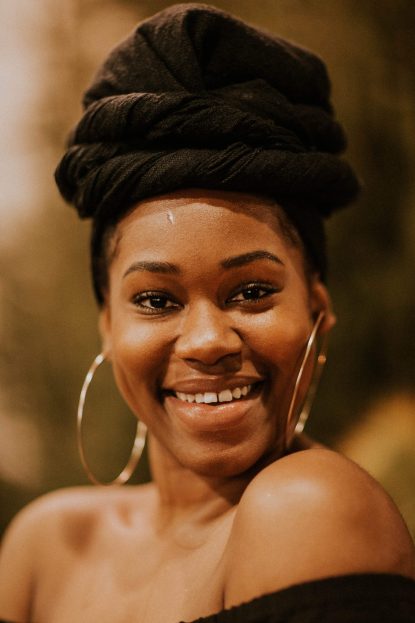 The former Gesu Parish, located in the Francisville section of North Philadelphia, had a great run from its founding in 1868 to its closure in 1993. But it still lives on through Gesu School, which is now an independent Catholic elementary school.

And Gesu School should continue on in its inner city neighborhood as long as it can produce graduates like Imani Nia Briscoe, ‘09, who received this year’s Distinguished Alumni Award at the recent Gesu Gala held online.

After Gesu, Briscoe went on to West Catholic Preparatory High School and St. Joseph’s University where she graduated in 2017, and is now an MBA candidate.

Briscoe, like most of Gesu’s students of this generation, is not Catholic. “My parents (William and Bernadette Briscoe) saw the importance of a good education that has a spiritual side to it as well, and thought Gesu would be a good fit,” she said.

While she did not come from a family of college graduates, “My parents are among the smartest people I know; they showed me things beyond the classroom,” she said.

“I was in Gesu pre-K through eighth grade, and there were really awesome things done there,” she said. “Growing up in a Catholic atmosphere, it gave me a spiritual foundation that is still there.”

Gesu, she said, has been recognized as a national model for inner city schools, and it shows. “The Immaculate Heart of Mary Sisters instilled their mission of social justice, hope and love.”

Also, many of the teachers were African American and “having teachers that look like them, that is a big part of a child’s development,” she said. “I saw the impact that had on me and probably the other students in the classroom.

“Gesu challenged me a lot more than I realized at the time,” she said. “It gave me the foundation and my teachers were amazing, and I was definitely prepared for high school. I would say it made us the best we could be, and I had opportunities others might not have. We learned many important things we didn’t realize at the time.”

While Briscoe maintains West Catholic is also a particularly good school, what struck her when she arrived there was how well assignments related to what she had already learned at Gesu.

Now having completed her undergraduate years at St. Joseph University — including one semester in Africa — she has a B.A. in communications, marketing and digital media. She is pursuing her master’s in business administration, also at St. Joseph’s.

In addition, she works at the university primarily as an experiential programmer for the school’s Center for Academic Diversity and also in the Office for Residential Life as a residential area manager.

Whatever the future brings, Briscoe is ready for it.

Her Gesu education prepared her to be a community leader and she continues to pay it forward. At this time she is serving on the Gesu School Junior Board.

If Gesu School started her on a path for a bright future, clearly her own self-motivation has a lot to do with it. The award was well-earned.