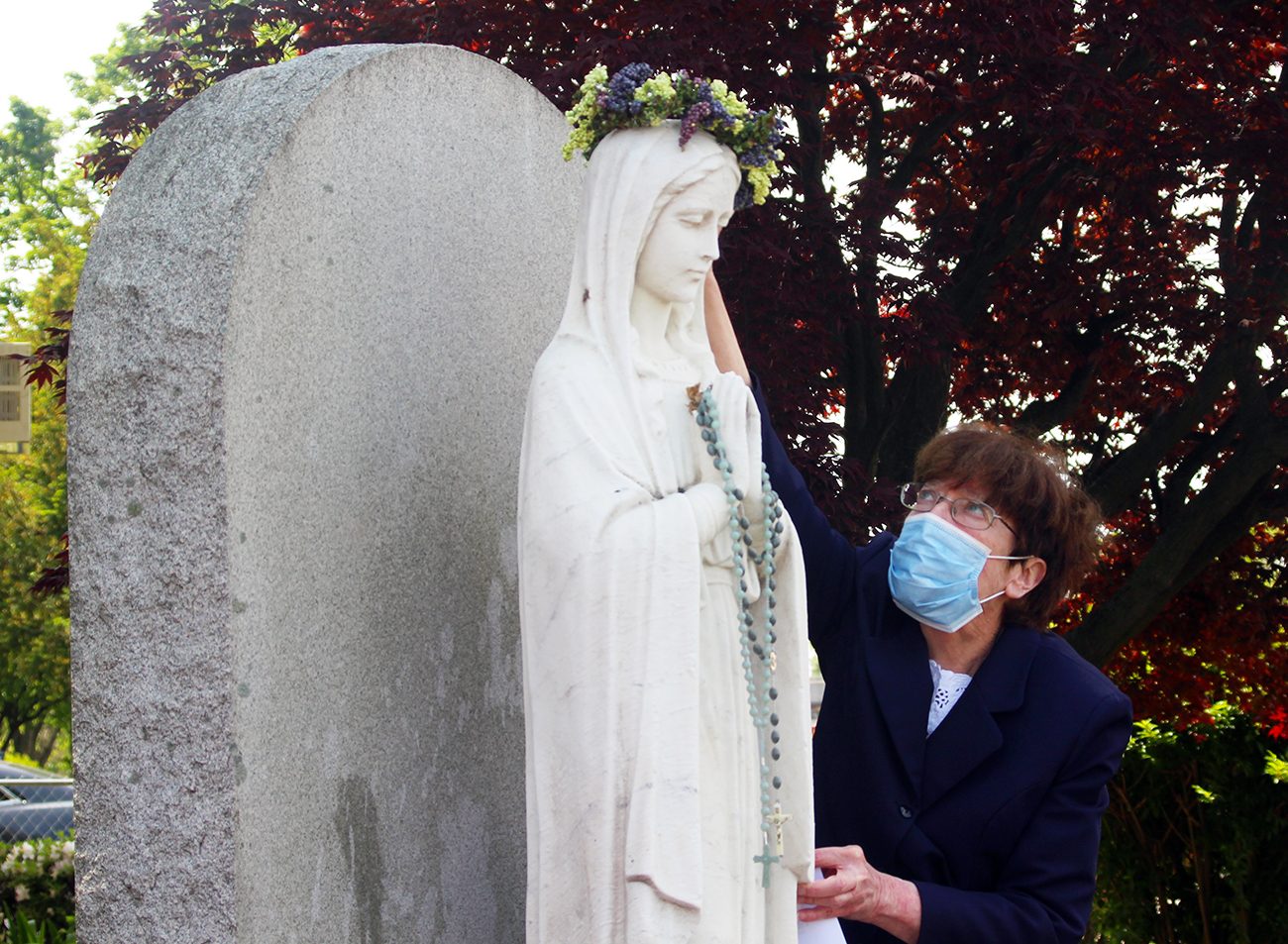 I.H.M. Sister Regina Mullen, principal of Holy Innocents Parish School in Philadelphia, crowns a statue of the Blessed Mother, May 15. The parish's normally elaborate celebration was simplified and filmed for social media due to ongoing COVID-19 restrictions. (Photo by Gina Christian)

Social distancing isn’t keeping one Philadelphia parish from staying close to Mary, even if it means revamping an elaborate annual May procession.

“We always had a beautiful May procession, especially because our church has eight entrances,” said I.H.M. Sister Regina Mullen, principal of Holy Innocents Parish School in the city’s Juniata Park section. “All the children from the different classes would come in as one, so it was like the spokes of a wheel coming in procession.”

With COVID-19 restrictions in place, the I.H.M. sisters opted for a simple May 15 prayer service in the side yard of their convent, at the end of which they crowned an outdoor statue of the Immaculate Conception.

Staff filmed the gathering for upload to the parish’s YouTube channel.

“I was not chosen, and you know, I don’t understand,” she laughed. “Did they vote for it? Did they have to write an essay? That’s normally what happens in our school.”

Instead, students have been reciting the rosary at home, while completing various “projects on Mary,” said Sister Regina.

The ⁦@IHMMacs⁩ of ⁦@ArchPhilly⁩’s Holy Innocents Parish honored Mary with a revised version of their annual May procession, which they filmed for students and parishioners. No #COVID19 pandemic can stop the Mighty Macs from crowning their Mother. #FridayFeeling pic.twitter.com/hld2tNsLIC

“They’ve been coloring images (of Mary), and writing prayers to her,” she said, adding that the themes of Mary’s immaculate heart, and her title as “Queen of the Angels,” have been prominent in the students’ work.

Marian coronations have a long history in the Catholic Church, and became widespread in the West after the end of the 16th century. A rite of coronation, developed in the nineteenth century, was later updated in 1981 by the Vatican.

The devotion has taken on new significance during the pandemic, with an ancient icon of Mary known as “Salus Populi Romani” (Protectress and Health of the Roman People) figuring prominently in Pope Francis’ prayers to combat the coronavirus.

Sister Regina said that her students, along with the parish itself, have found comfort in this Marian title.

“We have been saying Pope Francis’ prayer for a cure for the disease, and to help those who have lost family and friends to it,” she said. “Mary is the ‘Health of the Sick.’ She was there for her Son at all times, so I know that she will be here for us in this difficult time.”