Parish, school mobilize in prayer for nun with COVID-19 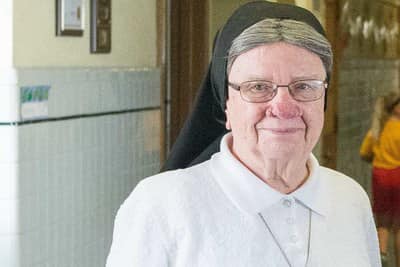 Families at St. Matthew Parish and School in Northeast Philadelphia have rallied around vice principal and IHM Sister Irene Loretta Cassady, who is now hospitalized in serious condition due to COVID-19. (Facebook / St. Matthew Parish)

A network of Northeast Philadelphia parishioners are mobilizing in prayer for a nun battling COVID-19.

Parents, teachers and students at St. Matthew in the city’s Mayfair section have been uniting in online rosaries for IHM Sister Irene Loretta Cassady, a Catholic educator and administrator with some 65 years of experience.

The beloved vice principal of the parish school is now in serious condition at Nazareth Hospital, while the convent’s 12 sisters are self-isolating after three were diagnosed with the virus late last month.

That deep affection was evident on May 4 as Father Welsh and several faculty members gathered in the parking lot of Nazareth Hospital to recite the rosary for their friend and colleague. Wearing face masks and standing in a socially distanced formation, the group prayed as a nurse held an iPad close to Sister Irene’s ear. The sister’s rosary beads were said to be in her hand throughout.

The following evening, Father Welsh and parochial vicar Father Brandon Artman blessed the convent and then the entire neighborhood from the rooftop of the school, bearing the Blessed Sacrament and relics of St. Matthew. The blessing was livestreamed on the parish’s Facebook page, where it drew over 3,000 views and more than 250 comments from parishioners and community members.

Daily rosaries, along with morning and afternoon prayers, are being offered online for Sister Irene.

A vibrant social media presence has enabled parishioners and school families to remain solidly connected throughout Sister Irene’s hospitalization and the coronavirus pandemic as a whole, said Father Welsh.

“I’m actually busier now than I was before the lockdown,” he said. “I sometimes refer to myself as a ‘cyber-pastor.’” 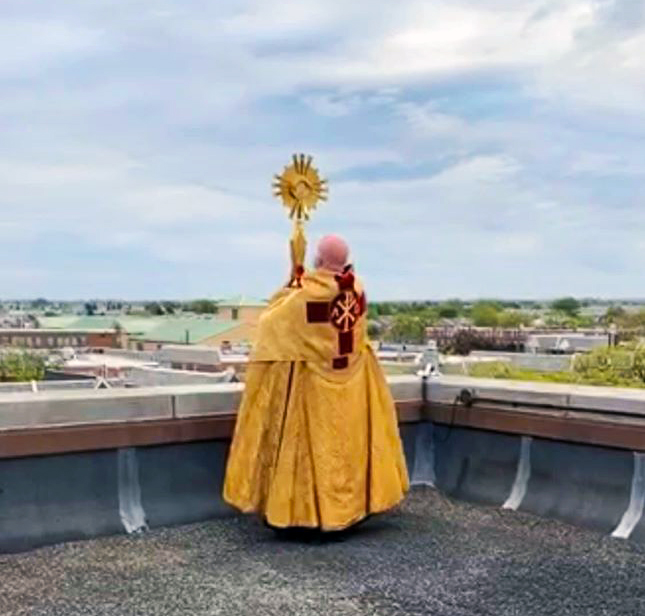 Father Welsh said that the St. Matthew’s community “made a decision very early on that we were going to continue to do everything the way we normally do, but use social media to do it.”

Facebook and Zoom have channeled the parish’s outpouring of heartfelt support for Sister Irene, while enabling members to comply with Philadelphia’s continuing stay-at-home orders.

“When I announced the blessing, I stressed that we wanted to pray, but we didn’t want everybody to show up at the convent,” said Father Walsh, adding that parishioners would have “descended” upon St. Matthew’s to stand in solidarity with the sisters.

“The presence of the IHM order here makes all the difference in the world at our school,” he said. “It’s palpable. The impact that these women have on our young people and upon the teachers is so easily recognizable.”

IHM Sister Mary Ellen Tennity, general superior of the congregation, said that Sister Irene in particular has been “an advocate for Catholic education her whole life.”

“Her particular forte is mentoring teachers,” said Sister Mary Ellen, who attended the May 4 rosary at Nazareth Hospital with two fellow IHM sisters. “Many, many of our principals and teachers, both IHM and lay, have been mentored by her.”

Sister Irene’s former colleagues at Sacred Heart Parish School in Havertown, where she previously served as principal, recently organized a Facebook Live rosary on her behalf as well.

Her mentoring continued even as she lay hospitalized: at the conclusion of the rosary, a participant noted that Sister Irene had recently made a video in which she had said that the pandemic could easily become “a time for ‘me, me, me’,” and challenged viewers to focus instead on “others, others, others.”

In her illness, Sister Irene enabled Father Welsh to impart a key lesson of faith to one St. Matthew’s student distraught over the nun’s hospitalization.

“I had a mother call and ask me to talk to her son, and I reminded him that whichever way this goes, Sister Irene is going to be fine,” said Father Welsh. “If you spend 15 minutes around her, you know she loves Jesus, and is loved by Jesus.”